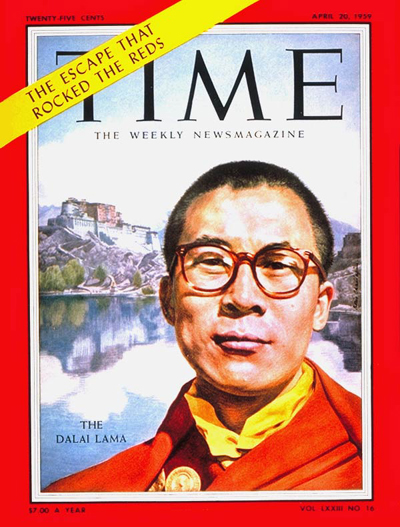 On 18 April 1959 the Dalai Lama, the young Tibetan Buddhist leader also known as "His Holiness", completed his escape from the Chinese crackdown on a nationalist revolt in Tibet, and began his exile in India by crossing the border at Tezpur in Assam State.

The world press was waiting in Tezpur, after hearing that the Khambas -- the horsemen who lived on the Tibetan plain -– were in revolt against the Chinese, and the Dalai Lama was fleeing the country. TIME magazine rushed him onto its cover, just two days after the dramatic climax of the 3-week escape. 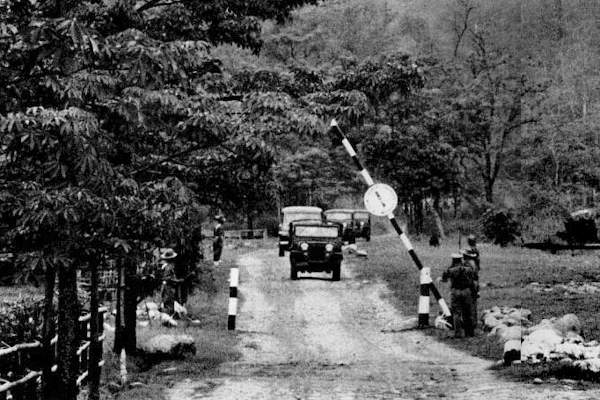 René Cutforth of the BBC reported:

"Just when we had given up all hope of anything happening, we heard that the Dalai Lama was on the way. It was five-thirty in the morning, and the rain was lashing down. Four hours later, the Dalai Lama and his party arrived. The first we knew of the Tibetans' arrival was the reedy hooting of a Jeep at high speed... a Jeep full of Gurkhas of the Assam Rifles, and close behind them a closed Jeep, out of which stepped the Dalai Lama." (lookandlearn.com) 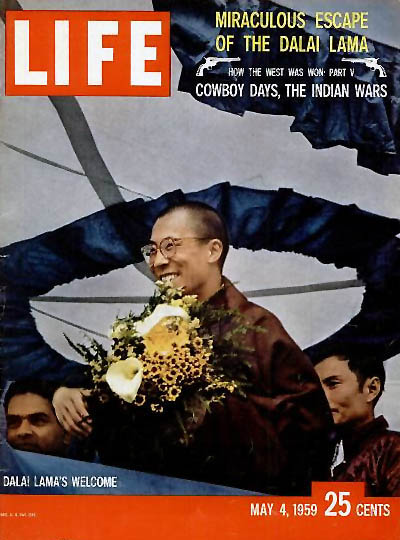 The Dalai Lama was also on the cover of the 4 May 1959 edition of LIFE magazine. The article "The God-King Finds Safety" described the arrival and its political implications, and included the photo above (250K JPEG).

A second article, "Flight in a Sandstorm: A Miraculous Escape," told the full story of the young leader slipping disguised out of his home in Lhasa, during a sandstorm which hid him from Chinese soldiers.

Escorted by Khamba bodyguards, the Dalai Lama and his party travelled hundreds of miles and over the 16,000-foot Chela Pass, by horseback, on foot and in small boats, before being met by Jeeps of the Indian Army which had penetrated 60 miles across the frontier. 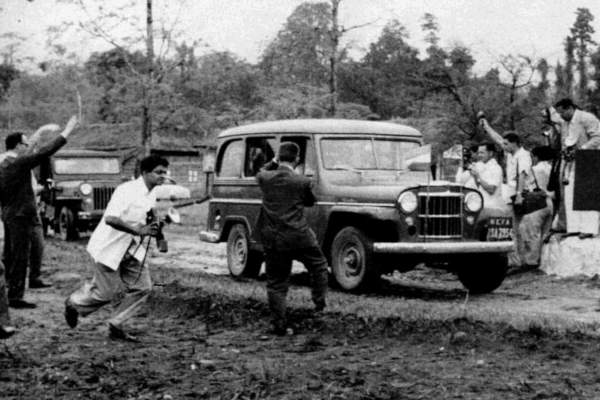 Photographers scrambled for a good spot as the station wagon carrying the Dalai Lama pulled up in Tezpur. Looks like Indian and Tibetan flags on the front of the vehicle in this LIFE photo. 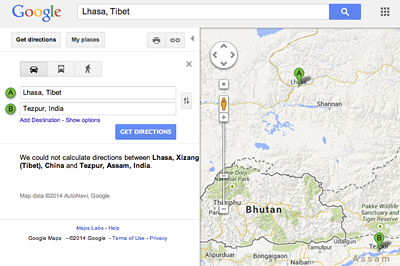 Anybody who thinks the journey might be easier in 2019 than it was in 1959, should check Google Maps, which will tell you "We could not calculate directions between Lhasa, Tibet and Tezpur, India."

See also a larger map (190K JPEG) showing the location of Lhasa and Tezpur in relation to India as a whole. 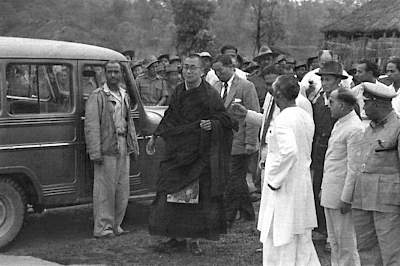 The 23-year-old Dalai Lama emerged from the Willys wagon looking happy that the trip was over. 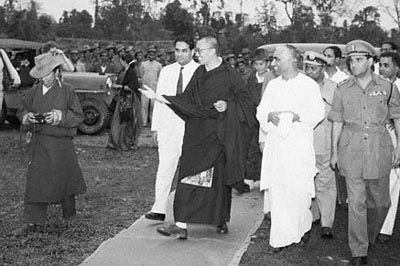 His Holiness was accompanied by his family and advisors, and welcomed by Indian officials and soldiers as he walked up a carpet made from army groundsheets. Photo from Corbis Images. 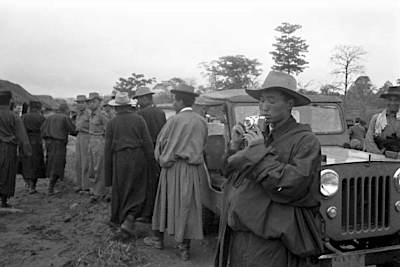 Buddhist monks and Gurkhas mingled beside the Indian Army Jeeps after the excitement died down. 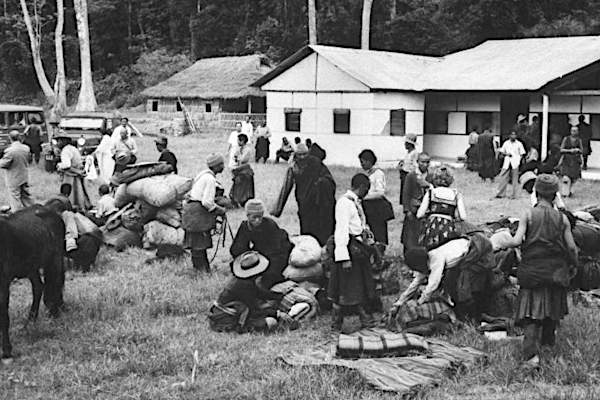 Also on hand to greet their young leader were hundreds of other Tibetan refugees, some of whom are seen in this unpublished photo from the LIFE archive, with the Jeeps in the background. LIFE quoted one Tibetan as saying, "It is important to put our very eyes on him." 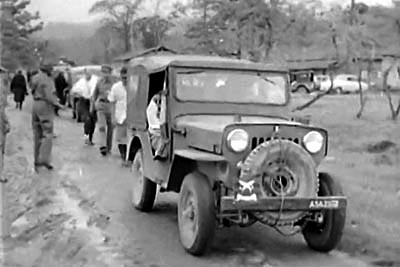 Not long afterwards, the Dalai Lama was still getting Army protection in Dharamsala in northern India.

The Indian Army Jeep in this undated newsreel frame was probably a Willys CJ-3B assembled in India by Mahindra & Mahindra. 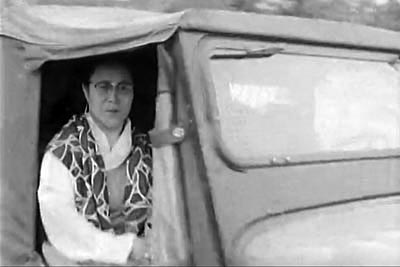 Born as Tenzin Gyatso to a farmer's family in a remote part of Tibet in 1935, His Holiness was declared to be the 14th incarnation of the Dalai Lama in 1939. The Tibetan government in exile has been located in Dharamsala since 1959. (Wikipedia)

The 3B is complete with ventilating (opening) windshield, and the rolled canvas doors are common in India. 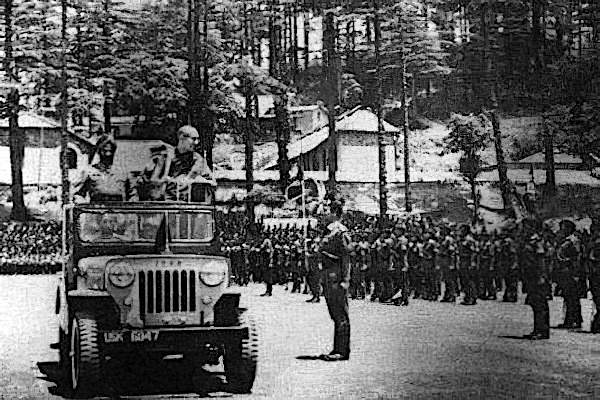 1959 was not the last time the Dalai Lama rode in a Jeep. He is reportedly seen here inspecting troops at Chakrata, India, after authorizing the Tibetan units of the Indian Special Frontier Force to fight in East Pakistan in the Indo-Pakistan War of 1971.

This brief, brutal conflict resulted in the liberation of Bangladesh from Pakistan. (See Mahindra Jeeps at War on CJ3B.info.) 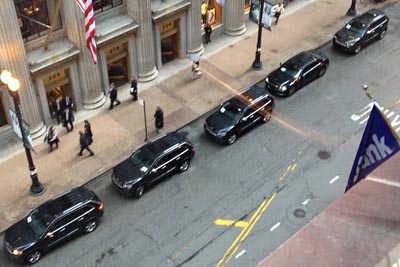 Mike Boom of JeepGarage.org grabbed this shot four decades later in Chicago, as Jeep Grand Cherokees lined up to transport delegates including the Dalai Lama, at the 2012 World Summit of Nobel Peace Laureates. 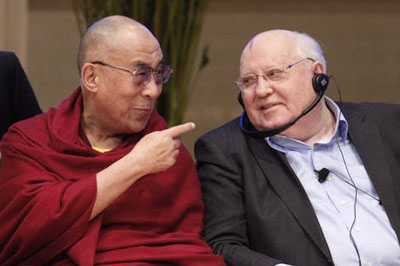 The Dalai Lama, who was awarded the Nobel Peace Prize in 1989, is seen here at that 2012 summit in Chicago, with Mikhail Gorbachev, former President of the USSR, who was the recipient of the prize in 1990. (AP Photo by Charles Rex Arbogast.)

In Thomas Laird's book The Story of Tibet: Conversations with the Dalai Lama, His Holiness talks about wanting to drive a Jeep when he was 16 years old. Now in his 80s, he is probably happy to leave the driving to somebody else, but he still remembers that Jeep ride across the border in 1959. 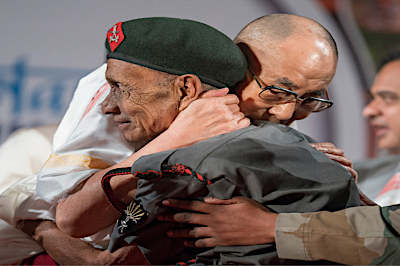 In April 2017, the Dalai Lama had a reunion with one of the young soldiers of the Assam Rifles who had escorted him in 1959. He embraced the now-retired Naren Chandra Das, and joked, "Looking at your face, I now realise I must be very old too."

Photo courtesy of the Tibetan Journal.

Thanks to Federico Cavedo for finding the LIFE article. -- Derek Redmond