The Lost CJ-4 discovered in 1997 had a direct connection to the development of the M38A1 (the first round-fender production-model Jeep, made for the military starting in 1951.)

I have found pictures and limited information on some military rigs that bear the same front end design as the CJ-4. One was apparently a prototype which was designated CJ-4M by Willys. 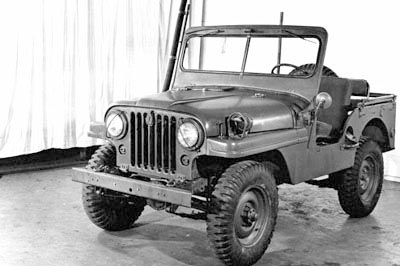 This obviously retouched photo of the CJ-4M might actually be a shot of the civvy CJ-4 doctored to look military. Taillight-style blackout lamps are seen in place of the front blackout marker lights.

The skirted fenders of the CJ-4 and CJ-4M are distinctive, and different from another prototype known as "X98" (below) which shared a similar hood profile but had flat fenders.

There are several photos of the flatfender prototype X98 being tested by the U.S. Army (see New Universal Jeep Designs, 1949-53) but factory photos of this rig have not turned up.

Another variant with the CJ-4 front wrap was a long wheelbase unit that apparently preceded the M170 models, and has been called the XM170. It is apparently Willys Engineering Project 6396, Model CJ-4MA Ambulance.

The M38A1 and M170 of course later became the CJ-5 and CJ-6 respectively. It's interesting that Willys apparently had early plans for a civvy version of the military developments, as evidenced by the CJ-4, when the CJ-3B was not yet even in production.

Thanks to Jim Allen for contributing his research, and thanks to Hubert Cossard for his drawings. -- Derek Redmond

Return to Military Jeeps on CJ3B.info.