Rallying with a CJ-3B-E in Spain 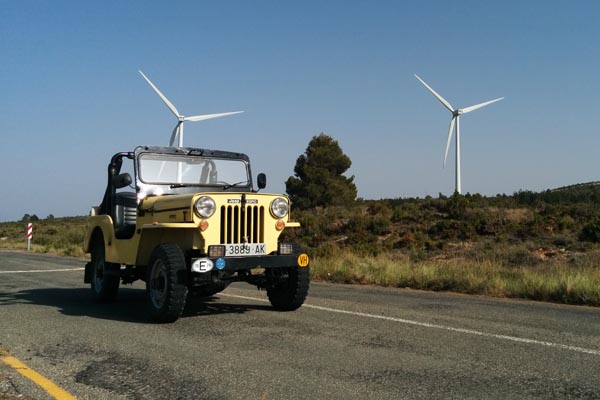 In the early 1970's, the Spanish CJ-3B which had previously been dubbed "Jeep Viasa" was renamed "Jeep Ebro" when licenced manufacturer VIASA was purchased by EBRO, the truck division of Motor Iberica.

This Jeep Ebro was sold new in 1979, and has been owned since then by Jaime Gomis and his father. 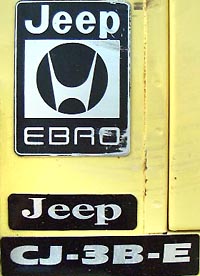 EBRO also soon started using the name "Bravo" for their disel-powered CJ-3B (see Los Jeeps: Made in Spain) but I wasn't aware of the designation "CJ-3B-E" until Jaime first sent photos of his Jeep in 2003. 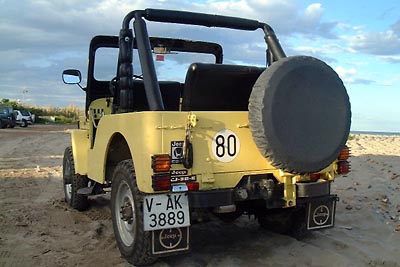 Jaime, who lived in Valencia on the Mediterranean coast in 2003, said "My Jeep was bought by my father on exactly the 29th of May 1979 so the Jeep now is 24 years old. In one more year I will try to make it an historical vehicle (getting lower taxes). The serial number is 505530." 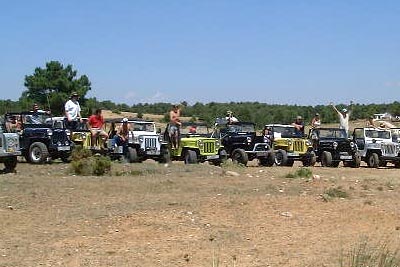 "Here in Valencia we have formed a club of Jeeps and when we go all together during one weekend we have thirteen CJ-3, five CJ-7, four YJ, and one TJ. 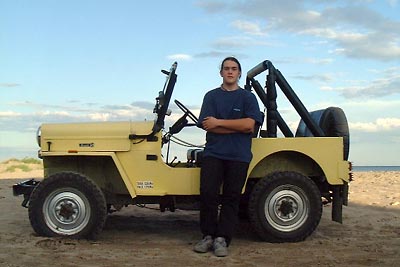 "Two years ago I went with my father and some Jeeps from our club, to a meeting of the official Jeep club, and the total distance we travelled was 1500 km in four days; I will never forget it. I'm 20 years old now and my idea for this summer is to make a trip through Spain with the Jeep." 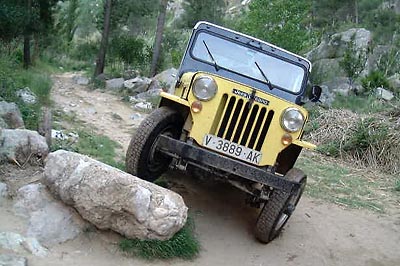 "The engine is the 'famous' Perkins 4108 with 4 cylinders and 1760 cm3. The power of the engine is 57.5 cv. The Jeep was completely rebuilt 8 years ago, and nowadays I use it every day to go to the university." 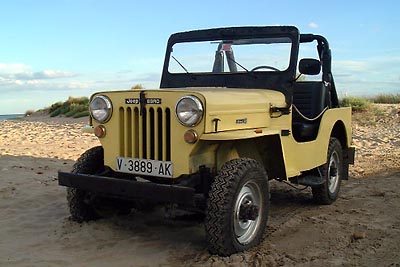 "I love to go to the beach with my girlfriend and my Jeep. Two weeks ago one of my two brothers married and the wedding car was the Jeep; this was one of my best days of my life.

"The Jeep has all the original parts except the typical things that get worn out (radiator, tires, upholstery in the front seats, the starter....) I always go to the official dealer for the repairs, and I'm very happy with the service that I receive." 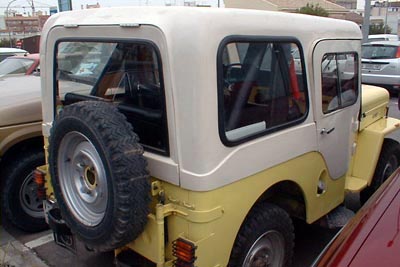 "When my father bought it, the Jeep had a soft top but as an option he bought the hard top (white) because the wind, the sound, the water were a problem. Two years ago was the first time that I took off the hard top. I am trying to make a little bikini top to reduce the sun and the heat." 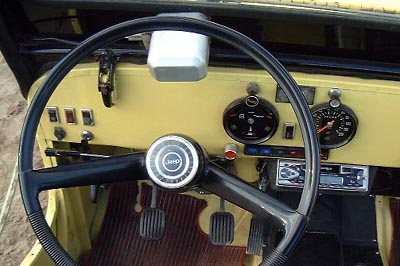 "The most important addition is the sound system that I have installed in it, with a radio/CD and 4 speakers with 500 watts."

See a wider view of the dashboard (60K JPEG) which, along with the Barreiros diesel (110K JPEG) and the tailgate, is perhaps the most noticeable difference from the original Willys CJ-3B. Also note that the gas tank is under the passenger seat. 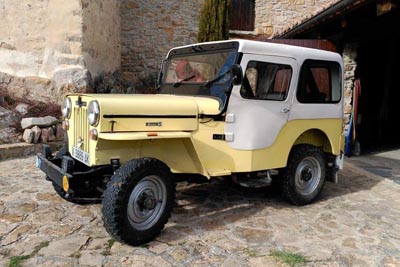 Jaime has also found that the hardtop is sometimes really nice to have, and another practical addition for rallying is a set of driving lights. 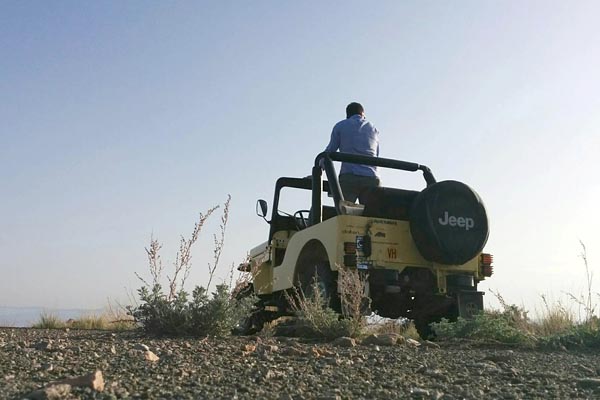 In 2017 Jaime sent an update: "We repaired twice the Perkins engine and repaired the seats but we are not driving it as many kilometers as we used to. We don't have enough time to drive it and also I moved to Barcelona three years ago because of my work.

"But five years ago I got a Warn overdrive and it is the best extra of my Jeep. It runs perfectly." 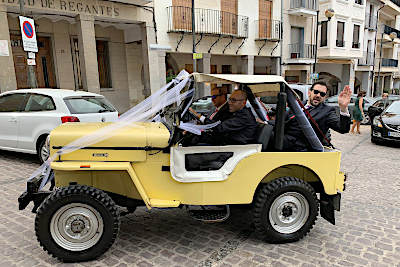 In 2020, Jaime sent some very good news: "On 8th August I celebrated my marriage with Marian, my girlfriend up to that day and now my wife. As you know I'm from Valencia and eight years ago I came to Barcelona for my new job. During my first year in Barcelona I met Marian, who also is from Valencia, but we met here in Barcelona. 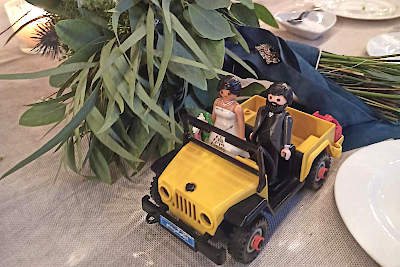 "Since that day we have been living together, and we decided to get married during 2020. Her birthday is 22nd of May, so we chose the 23rd of May 2020, but COVID-19 obliged us to change everything. 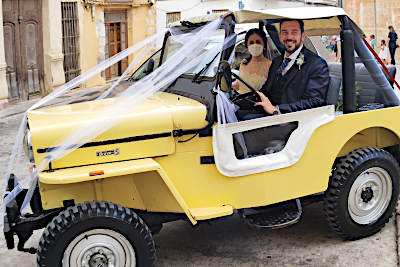 "Finally, we got married in Santa Maria de Sagunto (the church was restored by my father during the 1990s) in Sagunto, which is close to Valencia and the home town of Marian. The date was 8th August 2020 (08082020, nice!) and we used the Jeep as our wedding vehicle. That was one of the most important days of my life and the Jeep should be present. 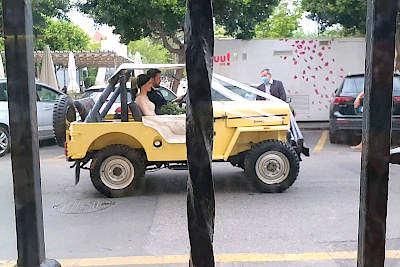 "During 2020 I brought the Jeep permanently to Barcelona to be our main car, but actually in Barcelona there's a restriction on driving cars without ecological engines. All cars and motorbikes produced before 2002 can't be driven from Monday to Friday from 07:00 am to 20:00 pm. 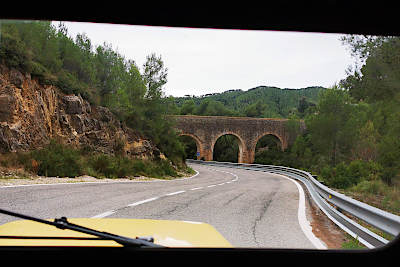 This photo was taken at Foix Lake near Castellet, south of Barcelona.


Thanks to Jaime for his photos, and Jean-Francois Lavie for the hardtop photos. -- Derek Redmond

Jaime's Jeep has been featured in movies and TV -- see High Hood Fun on CJ3B.info.