Sarao Motors of the Philippines 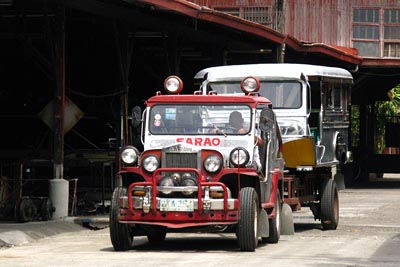 The Philippines is primarily known to many Willys fans as the home of MD Juan Enterprises, manufacturer of reproduction Jeep bodies and other replacement parts. But there is another business, on the opposite side of metropolitan Manila, which has also grown out of the history of Jeeps in the Philippines, and is almost a national institution.

Sarao Motors is a family business which has been building traditional high-hood "jeepney" minibuses since 1953. (For more background on jeepneys, see Jeepneys of the Philippines on CJ3B.info.) 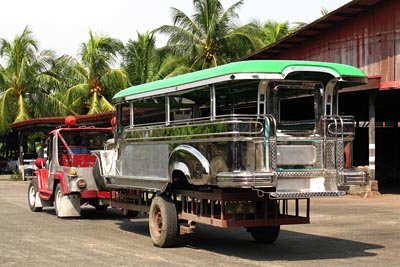 Jeepneys under construction are moved around Sarao's factory by their yard Jeep, which has many of the typical decorative features of the jeepneys themselves.

The Sarao Motors plant is located in the City of Las Piñas, a suburb of Manila known as a very progressive and modern city. Las Piñas is on the Roll of Honor of the United Nations Environment Program in recognition of outstanding achievements in the protection of the environment, such as banning the use of plastics and styrofoam in packaging. 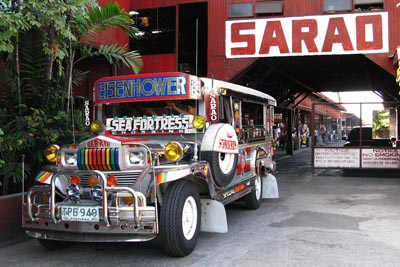 The 2.5-hectare (6-acre) assembly plant welcomes both customers and visitors, who may be looking for something different after seeing the more famous tourist attractions of Las Piñas such as the 1824 "Bamboo Organ" located inside the St. Joseph Church, with organ pipes made from bamboo.

Sarao is back in business in a serious way, building and refurbishing traditional highly-decorated jeepneys, after nearly folding due to economic factors in the year 2000. 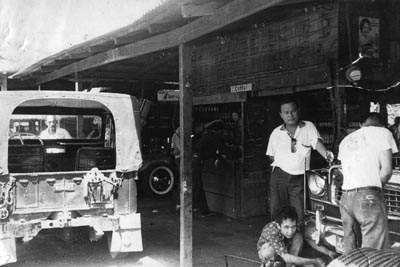 Leonardo "Mang Nardo" Sarao had worked for the railway and as a cochero (horse-drawn carriage driver), and saw a market in the Philippines in the early 1950s for inexpensive mass transit vehicles.(1) He and his brothers Ernesto and Eduardo modified their first surplus military Jeep as a six-passenger minibus in 1953, and never looked back. 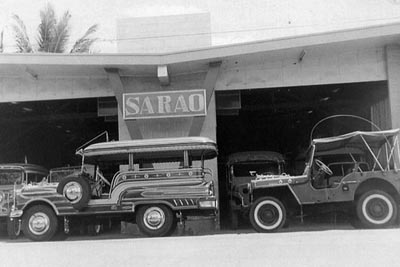 They began building jeepneys from scratch, and borrowed money to establish a company in 1956.(2) The early Sarao jeepneys reflected trends of the time in automotive design, with big front fenders and tailfins. But classic Jeep styling also continued to be an influence on Leonardo and his brothers. 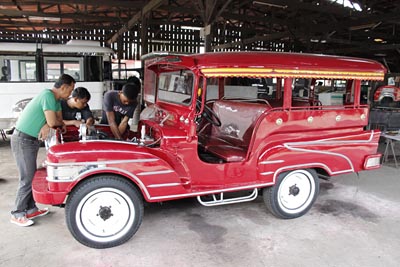 Today the company still owns a collection of some of their older vehicles, and in 2014 refurbished this example from 1955. 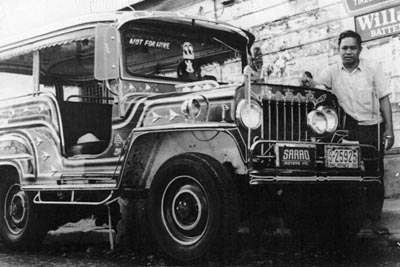 By 1958 when this photo of a customer was taken, the jeepneys were still small, but the principal design features of Sarao vehicles had appeared; the flatfender front end with high hood, and egg-shaped rear fenders inspired by the early-50's Studebaker pickup truck. 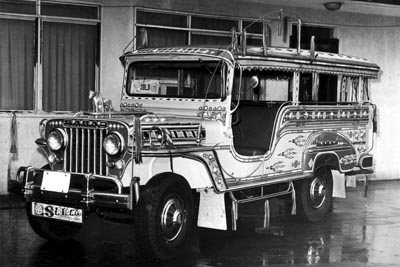 Model 02, introduced in the 1960s, grew in length to accommodate more passengers, as this form of transportation became central to the Filipino economy and way of life. There were a number of other competing firms also producing jeepneys. 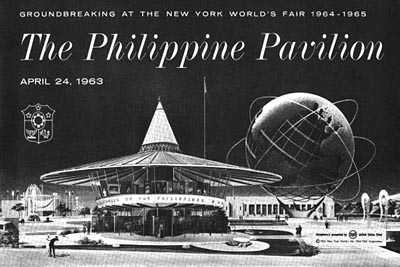 Sarao jeepneys were exhibited at the Philippine pavilion in the 1964 New York World's Fair, as a symbol of Philippine culture.(3) Although the jeepney's origins were tied to the American Jeep, it was seen as a Filipino invention and a form of folk art that expressed the Filipino identity.(4) 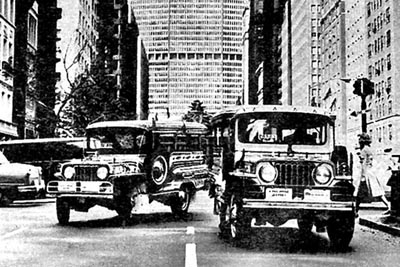 The jeepneys apparently escaped the confines of the World's Fair for a photo shoot in downtown Manhattan. This photo (5), probably not coincidentally, poses them in front of the brand new Pan Am Building, the then-headquarters of Pan American World Airways. Built during 1960-63, the 59-story skyscraper at 200 Park Avenue was the largest office building in the world at the time. (It has been known since 1992 as the MetLife Building.) 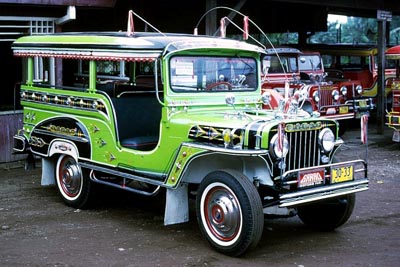 By the 1970's Sarao Motors had become the largest jeepney builder in the country (7), reportedly producing approximately 30 vehicles per month. (1) 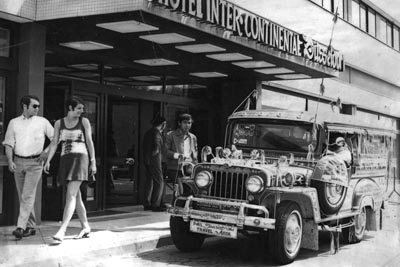 Sarao reached an agreement with the Philippine Tourist and Travel Association in 1971 to take two jeepneys (150K JPEG) from Manila to London and all over Europe as the "London-Manila Express." The roadshow, intended to boost the country's tourism industry, was co-sponsored by KLM, PAL, Air France and Hotel Intercontinental, and travelled to Paris, The Hague, Düsseldorf (seen here), Bonn, London, Berlin and Vienna. (6) 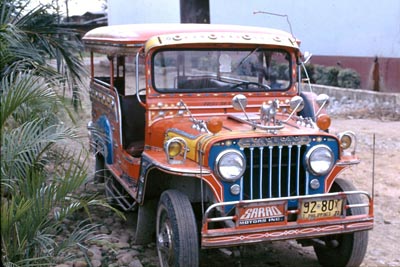 The Sarao jeepney had become almost ubiquitous in the Philippines itself. This January 1973 photo taken in Olongopo City is by Don Taylor.(7)

Closure and Rebirth of Sarao 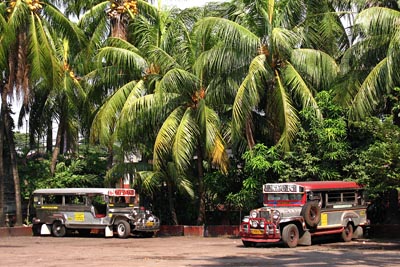 After Leonardo Sarao retired in 1995, the company continued to operate under his sons, including Edgardo Sarao.(2) But they were facing higher costs for imported parts and rising wages, as well as lower demand due to fewer operator licenses being issued by the Land Transportation Office.(8) On 2 October 2000, Leonardo appeared in front of his family and 350 employees to announce the closing of Sarao Motors.(1) 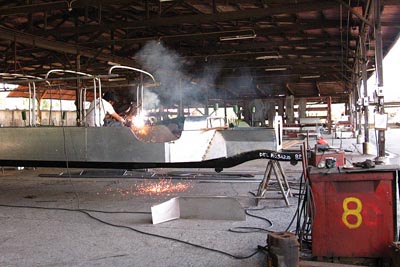 Being a private company, Edgardo and his siblings Rafael and Ernesto were able to resume business on a much smaller scale soon after, with about 50 employees. Leonardo "Mang Nardo" Sarao was able to see his company back in operation before he died in 2001 at age 80.(1) 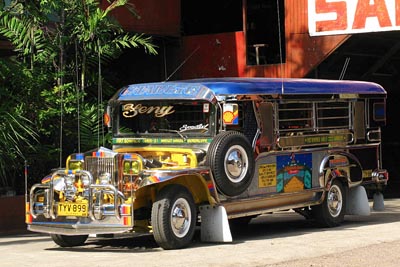 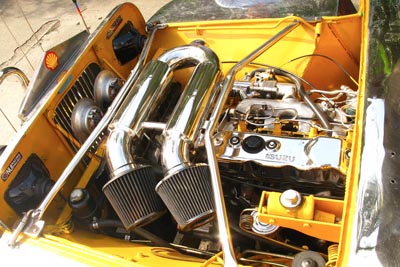 Engines are usually reconditioned Isuzu 4BC1 or 4BC2 diesels imported from Japan. Sarao's August 2014 price list puts the cost of a stainless 20-passenger jeepney including engine at 630,000 pesos (approximately US$15,000). 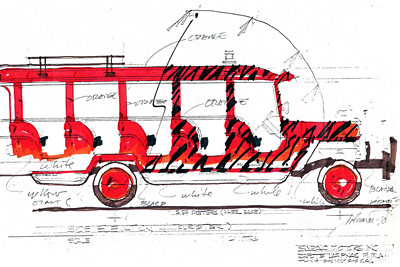 Flamboyant paint and exuberant decorations are a central part of the appeal of the jeepney, and Sarao is able to customize each vehicle for its owner. This paint scheme was planned for an unusual order of jeepneys equipped with wire grilles over all doors and windows. 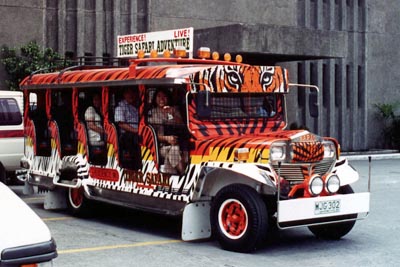 The Tiger Safari jeepneys are still in use, for a tour that includes attracting tigers by placing food on the windows, and even tempting them to jump onto the roof for viewing through the skylights. 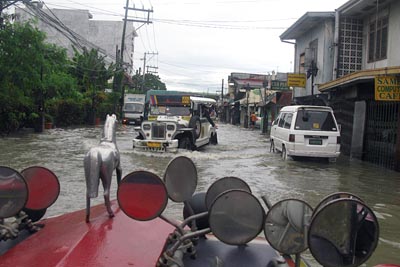 Jeepneys are two-wheel drive, but their high clearance allowed them to be some of the only vehicles on the road during the flooding in the Manila area caused by Typhoon Ketsana in September 2009. Known as Typhoon Ondoy in the Philippines, the storm caused a billlion dollars in damage and over 700 fatalities. 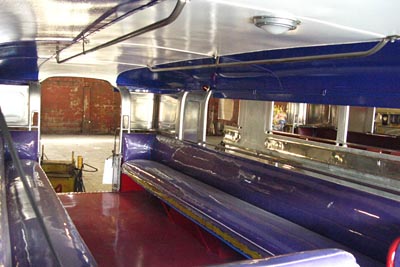 The interior of most Jeepneys is done in parallel benches, which accomomodates more people than seats in rows, and is a holdover from the traditional arrangement in horse-drawn carriages. 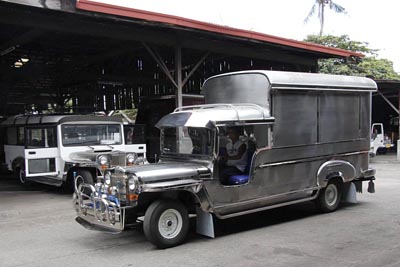 Another custom variation is this delivery truck.

See also a Sarao Jeepney for the USA, ordered by a Filipino-American group in Wasington state. 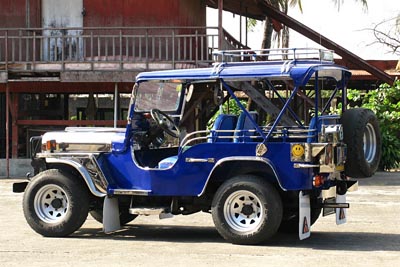 Short-wheelbase Jeep-style vehicles are also built, for personal rather than commercial use. 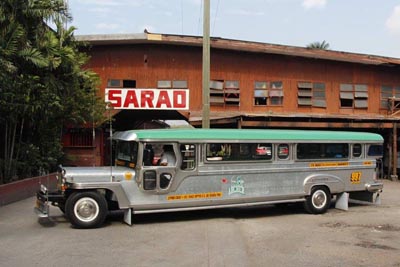 Speaking of wheelbase: Sarao's longest Jeepney to date is this 32-foot version. 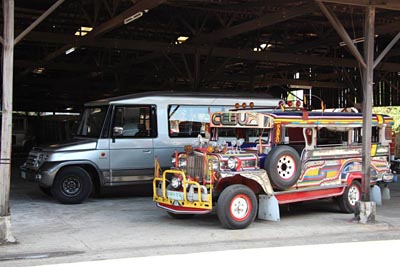 The Land Transportation Office is now planning a ban on jeepneys in metropolitan Manila by 2018, in an attempt to reduce traffic congestion.(9) But Sarao has an eye on the future, and in 2014 built the 4-wheel drive, Nissan-powered "Prototype ONE" seen in the background here. It's tall enough to stand up inside, and is suitable for conversion to uses such as delivery van or ambulance.

Thanks to Ed Sarao for use of photos from Flickr and Facebook, where you will find updates on Sarao Motors and lots more photos. -- Derek Redmond

Also on CJ3B.info, see Jeepneys of the Philippines and Building a Jeepney.