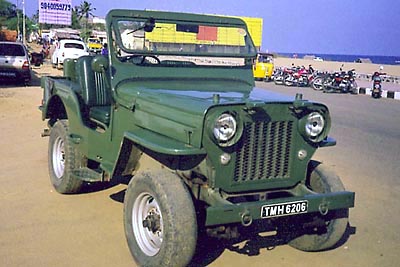 "Initially they were a trading company, importing post-war Willys Jeeps as completely built units, and then started importing knocked-down kits, which were assembled in India. In 1954 they started manufacturing the CJ-3B. Until 1968 they were left-hand-drive, which then changed to RHD as in India we drive on the left." 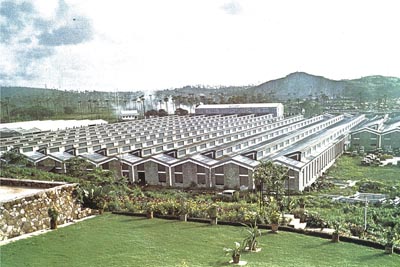 Another change happening in the 1970's when this photo of the Mahindra & Mahindra factory in Bombay was taken, was the shift from gasoline to diesel:

"Since the cost of gasoline rose steeply because of the oil crisis in the 70's, and the price of diesel was just one-third the price of gasoline, Mahindra started fitting the International Harvester diesel engines, from the tractors they were manufacturing. As of 2002 they have four engine options for the Jeeps -- the Hurricane gasoline engine, a 2400cc direct injection diesel (IH), Peugeot 2112cc XDP4.9, and Peugeot 2500cc XD3. These Jeeps come with various body styles -- short wheelbase Jeep, long wheelbase, Forward Control minibus, and flatbed trucks with single and twin cab (using the front of the CJ-3B)." 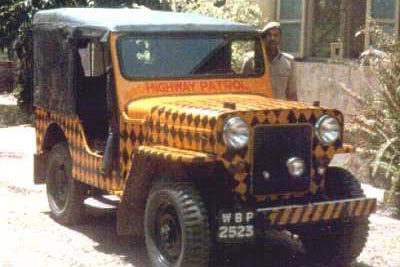 Uday Bhan Singh adds, "Only the Indian Defence services and some government departments bought the Hurricanes, while the majority of the Jeeps were sold with diesel engines. All along, the Army ordered the SWB CJ-3B with Hurricane engine until the 1990s."

This CJ-3B built under licence by Mahindra served as a "Highway Patrol" vehicle for the West Bengal Police. See also a police CJ-3B (240K JPEG) photographed in Chittoor district, Andhra Pradesh, by Siddhartha Shukla in 2008, copyright Ikikon_18 at flickr. 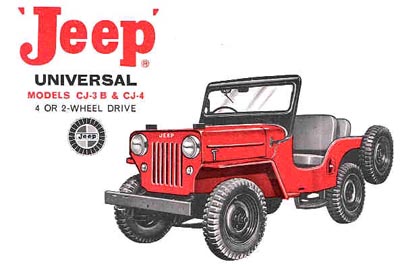 Mahindra adopted the "Universal" name in their early advertising. See a complete copy of this brochure (80K JPEG) for "The World's Biggest Little Vehicle." It's from the pre-diesel period, promoting the Hurricane-powered CJ-3B and long-wheelbase "CJ-4".

The other side of the brochure has specifications (80K JPEG) for both models, in four- and two-wheel drive. 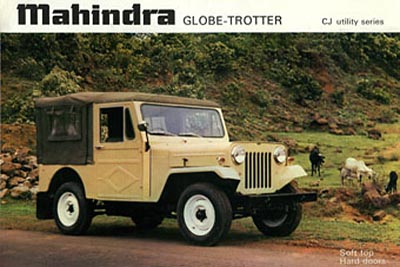 Another short-lived name was the "Globe-Trotter." This brochure probably dates from the 1970's and shows the front fender extensions possibly inspired by the Mitsubishi Jeeps in Japan. Marker lights have been added atop the fenders, but these were likely prone to breakage and were soon redesigned.

The full hard doors with soft roof was a look that didn't catch on in North America until AMC's YJ Wrangler debuted in 1987 -- it was also perhaps inspired by Mitsubishi. 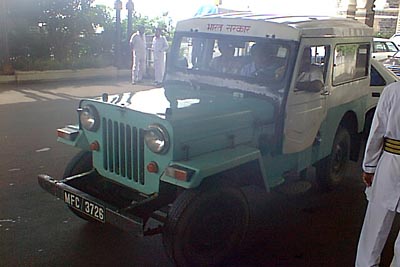 Here's a photo from Ed Bee in Bombay that really evokes India. This 1970's model is still quite similar to the original Willys CJ-3B, although Mahindra has now added new marker lights supported by fiberglass brackets on the dog-eared fenders. 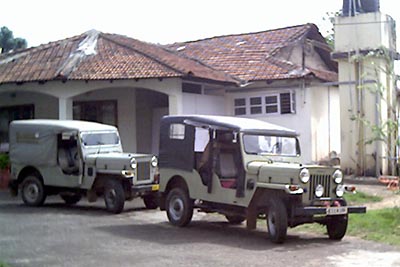 S. Srivardhan photographed these long-wheelbase Mahindras at Mercara, an area of coffee plantations in the state of Coorg, Karnataka. Still in production as of 2002, the four-door Commander 650 is based on CJ-3B bodywork. The next model up, the 750 (see The Streets of Bombay) has a CJ-5-style front end, while the top-of-the-line hardtop Armada has rectangular headlights.See also a front view (30K JPEG) of this Commander, with its dual driving lamps and dual horns. 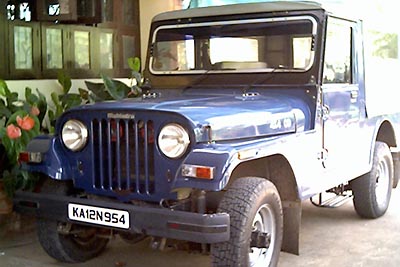 The MM540 has been in production for many years, and is Mahindra's distinctive combination of the CJ-5/CJ-7. Note that the headlights don't extend into the grille slots as on all the U.S.-built models. Uday Bhan Singh comments, "The new model MM540 was inspired by the KIA Jeeps, which looked like the CJ-5, with a Peugeot XDP 4.90 diesel engine and a five-speed KM T90 gearbox (4X4 and 4X2 versons were offered.) A petrol version with the F134 engines was also available in the 540."

Horns are clearly important in India; the pair on this Jeep are only slightly less obvious than on the Commander above. 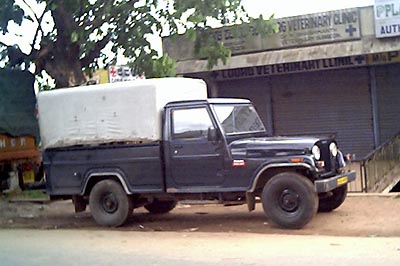 The Mahindra Pickups are available in single-cab and crew-cab versions. As well as some flatfenders, there are models like this one with the MM bodywork, and some with a 5-slot grille similar to the DJ-5A U.S. Postal Jeeps.

See also a flatbed body with backhoe (180K JPEG) photographed by Michael Kohli, who says it's used for clearing ditches on narrow roads. The badge on the side of the cab with supersized rear window (150K JPEG) reads "Mahindra Pickup." 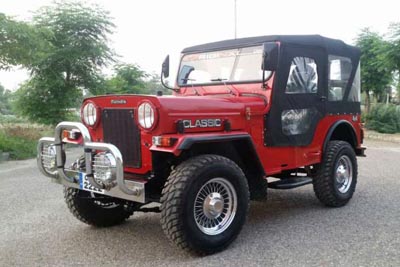 The Mahindra Classic, a diesel CJ-3B with all the trimmings, was produced as late as 2011. However, the Mahindra web site indicates that as of 2017 the current models no longer include a CJ-3B-style Jeep. 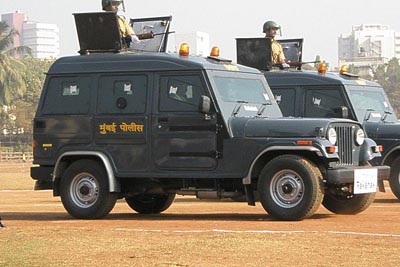 A military-spec MM540 is the "Rakshak", a bulletproof vehicle with ballistic protection designed by the Israeli company Plasan Sasa. Sides and floor are covered with armor including steel, high performance polyethylene and aramid laminates. Mahindra refers to it as an "effective aid in counter-insurgency and anti-terrorism operations as well as on the battlefield." 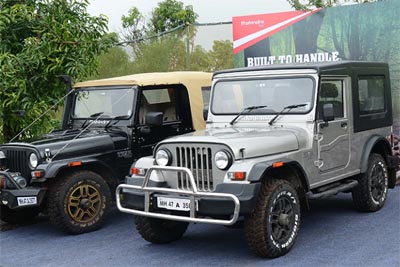 The newly branded Mahindra Thar, a direct descendant of the MM540 models, debuted in 2010 to keep the Jeep tradition alive in India. As of 2017, the Thar is available with a 4-cylinder, 2.5-liter turbo diesel, 5-speed manual transmission, low-range transfer case, and full-floating rear axle. It has IFS and rear leaf springs, and the wheelbase is 2430mm (95.6 inches). 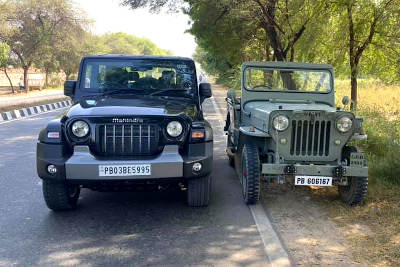 An all-new Thar appeared in 2020, with styling owing more to the Jeep Wrangler JL, in hardtop or soft top models. It's seen here beside an early Mahindra-assembled military CJ-3B, in a photo by Jaiveer Singh Gill. 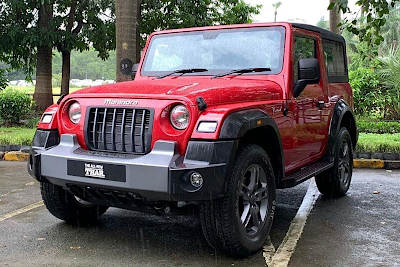 The new generation Thar is available with a 2.0-litre gasoline or a 2.2-litre diesel, and a choice of 6-speed automatic transmission or 6-speed manual. It comes in six different colors and has a much more upmarket interior and better handling on pavement than previous models, but also has the ground clearance, short overhang and low-range 4WD to provide off-road performance.

Fiat Chrysler, Jeep's parent corporation, announced in 2017 that Fiat India had joined Mexico, Brazil and China in manufacturing the Jeep Compass. India will be producing the Compass for export to all right-hand-drive markets. A company spokeperson stated, "The Compass will be the first 'Made in India' Jeep vehicle," which is an odd thing to say, because hundreds of thousands of Jeep branded vehicles have been built in India by Mahindra & Mahindra Ltd., under license to Willys and its corporate successors. 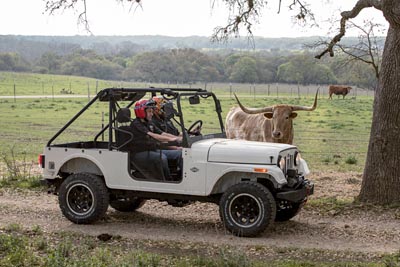 The next surprise happened in early 2018 when for the first time, a Jeep (sort of) was exported by a licensed overseas manufacturer, back to North America. The Mahindra Roxor, a Jeep in everything but name, went on sale through powersports dealers as an offroad utility vehicle, not street legal in most states without modification.

Photo by Zachary Scheffer for Mahindra. 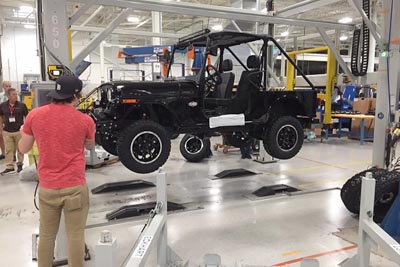 The Roxor is basically a version of the Thar, but is assembled by Mahindra Automotive North America (MANA) in Auburn Hills, Michigan, with parts imported from India and some local content. It's powered by the Mahindra 2.5 liter turbo diesel, with the 5-speed transmission, a PTO-ready transfer case based on the Dana 18, a boxed frame and solid axles.

Thanks to Jim Faiella for this photo of the plant, taken on 22 August 2018. 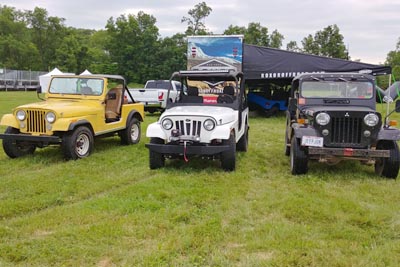 Emmett Lodge took this photo at the Bantam Jeep Heritage Festival in 2018, showing a Roxor posed between his 1988 Mitsubishi J53 high hood, and an AMC CJ-7. It dispels any suggestion that the Roxor is a "mini" Jeep; in fact its overall length of 148" is 18" longer than a 3B. See also a rear view (400K JPEG). 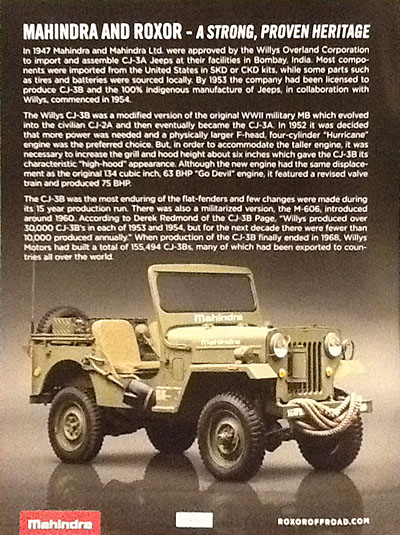 Mahindra has been referencing the CJ-3B and my website in some of its advertising for the Roxor. Thanks to Steve Jaksha for sending this page from Mahindra Roxor Adventure magazine.

The front grille openings on the Roxor were changed slightly from the patented Jeep grille, so as not to step on Fiat Chrysler's toes in North America. This does not appear to have been enough to prevent a legal action launched by FCA against Mahindra, with the U.S. International Trade Commission in August 2018.


In November 2019, an International Trade Commission judge ruled against Mahindra, and it appeared that Roxor sales in the U.S. would be prohibited. However, Mahindra announced a new grille design for the 2020 Roxor, with horizontal slots, and in December 2020 the ITC ruled that the further redesigned 2021 Roxor (40K JPEG) no longer infringes on the "Jeep Trade Dress" as claimed by FCA.

As of January 2022, Fiat Chrysler asked an appeals court to revive its bid to ban the new Roxors, arguing they didn't keep a "safe distance" from the trademark-protected design of Jeep's Wranglers. They argued that Mahindra should have been subject to the more stringent safe-distance standard because it was already a known infringer.