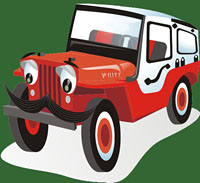 ¡Hola!   My name is Willys Alberto Sevillano. I was born in Toledo in Los Estados Unidos in 1954, and lived for 55 years in Sevilla in the Zona Cafetera ("Coffee Zone") of Colombia (see a map, 370K JPEG).

In Part 1 of my story, my new driver Hairy came to Sevilla and I said goodbye to Don Alberto. Then Hairy bought me a new suit of clothes, and we drove to Bogotá.