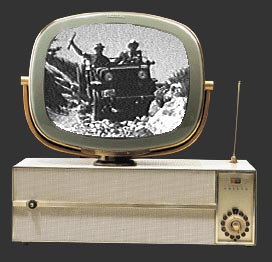 The pictures on this page are frames from 1955 movie footage, courtesy of Danno Raffetto, showing CJ-3Bs on California's famous Rubicon Trail during the 3rd Annual Jeepers Jamboree. The footage was included in Jeepers: The 40th Anniversary of the Jeepers Jamboree, produced by The Searchers Video.

I have removed the short video clips previously available for download here, since much of the footage is now available on YouTube (with a misleading date of 1968 at the beginning.)

In the 1950s, stock or near-stock Jeeps easily carried groups of adventurers over the trail. Typically 4 or 5 to a Jeep, with no seat belts or roll bars.

The CJ-3B above with the Jamboree pennant, and at least one other seen here were painted in Transport Yellow, a paint color just introduced by Willys for the 1955 model year.

Another dark 3B has something unidentified hanging in front of the grille.

Danno says, "In the first years of the Jamboree, we would all roll into Tahoe together. Jeeps as far as the eye could see...."

What are these guys carrying in the back of their 3A?

The pennant attached to their front bumper can be clearly seen to read "3rd Annual Jeepers Jamboree."

The spring runoff has been gradually making the Rubicon Trail more rugged. The video Jeepers: The 40th Anniversary of the Jeepers Jamboree includes a then-and-now comparison of the area near Little Sluice.

The 40th Anniversary Jamboree (1993) included this modified and lifted CJ-3B. I've been told that the driver is Mark Smith.

The Searchers Video produced Jeepers: The 40th Anniversary of theJeepers Jamboree, and a number of other off-roading videos.

Much of the 1955 vintage footage can be seen on YouTube (but note that the date of 1968 there is incorrect.)

Thanks to The Searchers, Danno Raffetto and J.C. Jenkins. -- Derek Redmond

Also on CJ3B.info, see A Killer B on the Rubicon.

Return to CJ-3Bs in History or to the index of Unusual Photos on CJ3B.info..