by Mike Albright and Jarek Skonieczny

The process of die casting was first introduced at the 1893 ColumbianExposition in the form of the Linotype machine, and the first ever die cast car (a Model T) was produced by Charles Dowst in 1906 using this machine.

In 1922, the Dowst Manufacting Co. applied the name Tootsie Toys (after the company president's daughter) to a line of doll house furniture. The name Tootsietoys was registered in 1924, and Tootsietoys produced detailed diecast models of vehicles right up to WWII. After the war, however, the emphasis switched to creating inexpensive toys for children.

Ed Bruening, who has studied the history of Dowst production, says the first Tootsietoy jeep toy was patterned after the Bantam prototype which had appeared in various publicity photos, rather than copied after a production model. It was scheduled to go into production for the 1941-42 holiday season but didn't make it due to shortages of rubber wheels and of some ingredients for the casting metal. The result was that the first ones were made with wooden wheels in late 1941 for distribution in the spring of 1942, and the body castings were increased in thickness to make up for a lack of tensile strength. When you have one of the rare wooden-wheeled wartime ones you can not only feel the difference in weight, but the wall thickness of the toy is measureable. The original molds were altered slightly for post-war use, and may have been used as late as the 1960s by Tootsietoy in the U.S. and Canada. 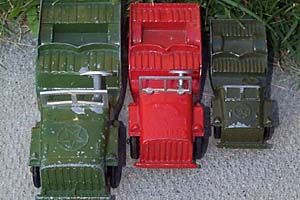 According to Wheels: TheMagical World of Automotive Toys from Christie's auction house, postwar Tootsietoys were sufficiently popular to be copied by Metal Masters and Accucast. Some of the latter companies used white metal, instead of the Mazac (also called Zamac) die casting, which made them heavier and thicker. The real Tootsietoys can be spotted by their lighter weight.

The photo shows a 1947 Metal Masters toy on the left, 5-3/4 inches long. The 5-inch red jeep is a Tootsietoy; some examples have a snowplow on the front. The smaller green jeep, also made by Tootsietoys, has the windshield folded down and the steering wheel as part of the casting; it also has a high number of vertical slats in the grille. 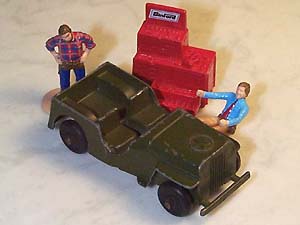 This Jeep -- probably intended to represent a CJ-3A or M38 -- was produced by Tootsietoys in roughly 1/64 scale in the 1950s. It did not have a windshield, and was available in both civilian and army paint. 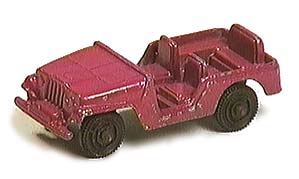 The next casting had the rounded front fenders of the CJ-5, and a back seat added. Approximately 2-1/4 inches long (58mm), it was also released in sets with other vehicles (see a fire fighting set, 60K JPEG).

See the Tootsietoy with a Midgetoy, a similar but even smaller toy Jeep (20K JPEG).

In 1969 the last all-metal Tootsietoy was made, with all later toys having plastic and metal composition. 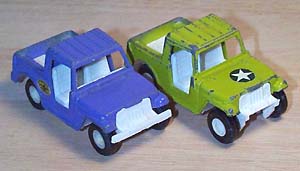 This halfcab Jeep, with plastic base and metal body, was the first appearance of a design which is still being sold by Tootsietoy in 2003. The scale of this toy is approximately 1/43, and some have the date 1969 molded into the plastic base. See a military version pulling a field gun (60K JPEG). 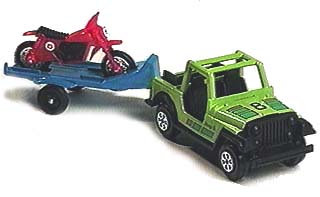 The recent Tootsietoy Hard Body CJ (#2874), in green paint with a motorcycle trailer, is a similar casting but without the hardtop. The plastic portion of the vehicle now includes the running boards, fender flares and front fenders.

See also a photo showing both old and new sets (70K JPEG) with a Jeep pulling a two-motorcycle trailer. 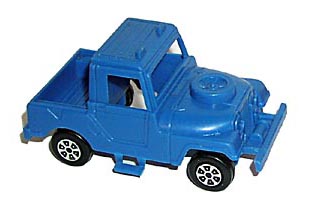 In 1961, Tootsietoys had merged with Strombecker, with both names being used concurrently ever since. Tootsietoys continued to create diecast toys, while most Strombecker ones are plastic.

This Strombecker Jeep, identified on the bottom as "Kool Kats No. 5000, Made in U.S.A." shows an obvious design similarity to the Tootsietoys. 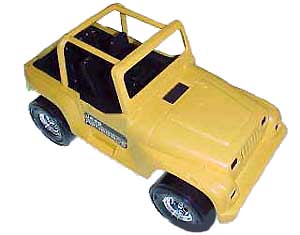 A larger Tootsietoy Wrangler Renegade (in either yellow or black) is a plastic toy, 9 inches long. Smaller plastic Tootsietoys include a CJ-7 and an XJ Cherokee, approximately 1/32 scale. 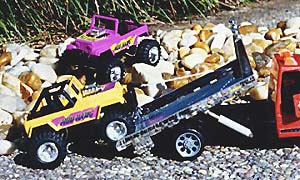 Hard Body #3450 is a yellow diecast YJ with a black plastic soft top, and an ATV on a trailer. Molded into the plastic base is "Tootsietoy Customized 4X4 made in China". Length is 7-1/4 inches bumper to bumper. 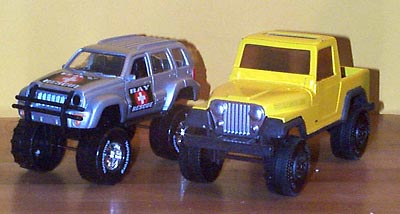 Some big Tootsietoys may now be plastic, but the original diecast toy company keeps making the Hard Body series in metal, even in large sizes. A big Jeep Liberty with opening side and rear doors which appeared in late 2002 (see Lifeguard Jeep Toys) shows the same heritage as the "Desert Rat" CJ-7 from the 1980's. 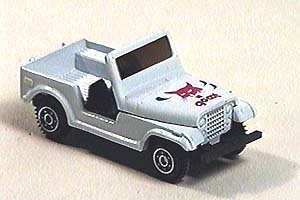 The Hard Body #2020 CJ-7, with "go cat" decal on the hood, is a 1/64 scale casting very similar to the Yatming #1608 from Hong Kong. It has the hatched grille, even though Tootsietoy is a registered user of the Jeep trademark.

See also a photo of the blister pack (20K JPEG).


The Tootsietoy shelf (below) of Bob Keniston's "Jeep Wall" in New Mexico gives a look at the relative sizes of many of the toys on this page, and others. See a big 2000x400 version of the photo (100K JPEG).

Note: see also Bob's complete Jeep Wall (200K JPEG) -- the Tootsietoy shelf is at bottom left. Thanks to Bob for the photos.