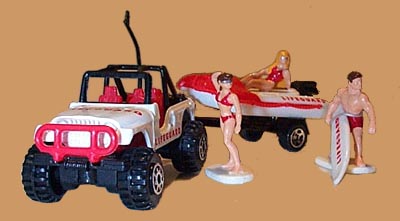 See a photo of the set with the packaging alongside a knockoff set made in China (40K JPEG). 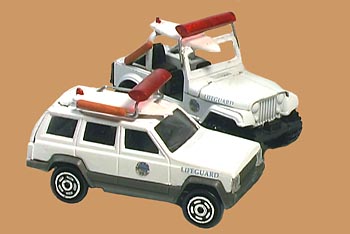 I customized this matched set of Lifeguard Cherokee and CJ as a proposal for a set that could be produced by Matchbox or Majorette. They're based on vehicles used in Laguna Beach, California. For more details on the prototypes and the 1/60 models, see Laguna Beach Lifeguard Jeeps on CJ3B.info. 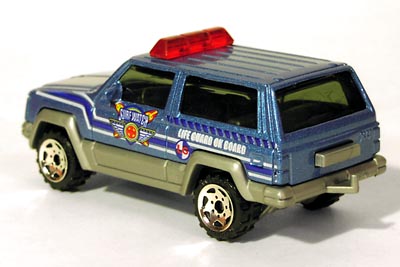 Matchbox finally did it! Sort of. This "Surf Watch" version of their 1/58 Cherokee came as part of a 2005 set of Action Launchers (150K JPEG) which also included rescue vehicles for desert, snow and fire. The XJ is marked "Life Guard on Board."

And there was a Shark Patrol (40K JPEG) version of the Jeep Compass, in an Oceanic Expedition Action Launchers pack. 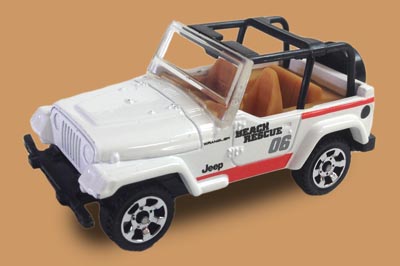 Matchbox followed up the Cherokee with a 1/64 "Beach Rescue" Wrangler in 2006. These two could have been the Laguna Beach set. 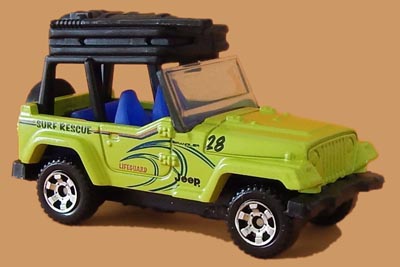 Since then lifeguards have become a staple for Matchbox. This Lifeguard Wrangler from 2012 was available in a "Surf Rescue" set (130K JPEG) with a Zodiak on a trailer. 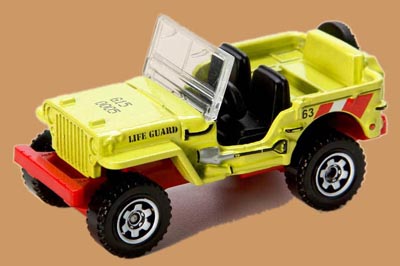 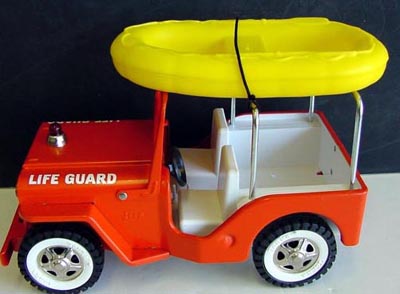 One of many variations of the 10-inch (25cm) Tonka flatfender Jeep was a Life Guard version produced in the late 1960s. The plastic life raft accessory is of course frequently missing from surviving examples. 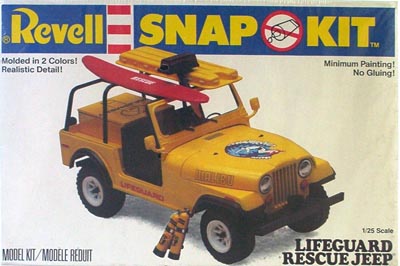 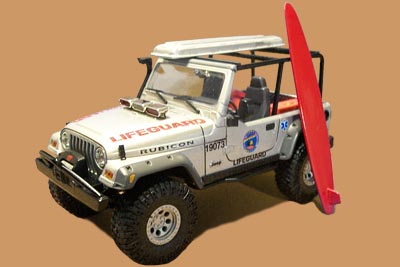 This kitbashed 2003 Rubicon by Mark's Wheels is based on the Revell metal and plastic "Lara Croft Tomb Raider Jeep" kit. The decals are from a Lindberg "Baywatch" pickup truck kit. 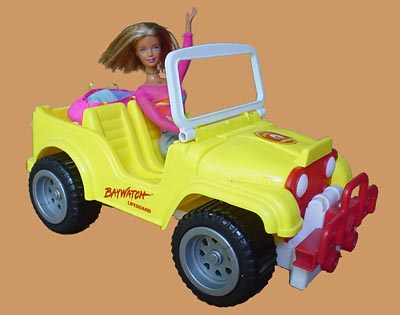 Speaking of Baywatch, this Barbie-size plastic Jeep has stickers on the sides and hood that read "Baywatch Lifeguard." The reference to the popular TV show was apparently licensed by Mattel, but not the Jeep name, since the toy is called "Rescue Wheels" (see the box, 140K JPEG). 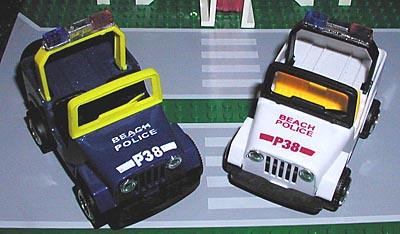 This "Beach Police" vehicle in blue or white is a spring-driven toy made in China, which has shown up in a variety of colors and configurations in recent years, labelled "SD Toys" on the base. 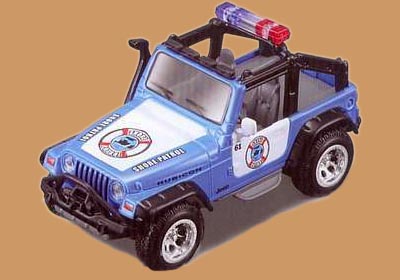 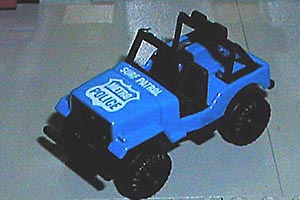 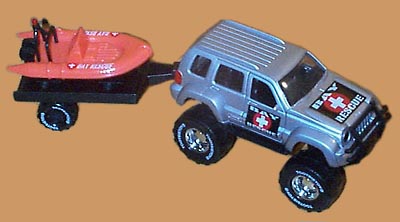 This 1:25 diecast metal and plastic set was a late-2002 release in the Hard Body series from Tootsietoy. The "Bay Rescue" Jeep Liberty has tires that seem well suited for the sand. See also the packaging (40K JPEG). Photos by Jarek Skonieczny.

The late Mike Albright got us started on this page. -- Derek Redmond

See also some full size Jeeps in the Sand on CJ3B.info.