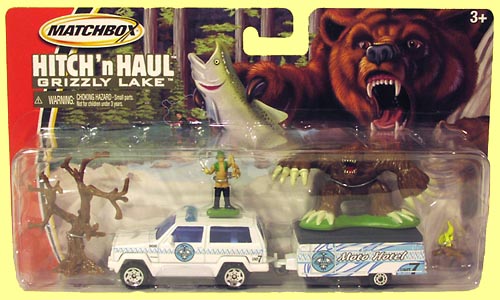 The most play value in a Matchbox Cherokee in the past few years came in 2005's "Grizzly Lake," one of several new playsets in the venerable Hitch 'n Haul series. The monstrous grizzly included in the set promises a different kind of fishing trip than you might get with some previous toy Fishing Jeeps. But the significance of the livery and the blue light bar is not clear. Grizzly Lake also includes a fisherman, plastic campfire, spooky tree and "Moto Hotel" camping trailer.


Another Matchbox trailer that appeared in 2005 is an 18-wheeler they refer to as the Matchbox® Jeep® Tractor Cab ConvoyTM Vehicle (60K JPEG). 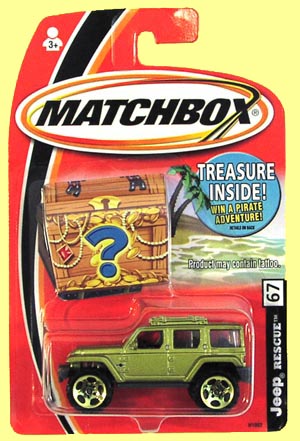 The Matchbox 1-75 series took on a Pirate Treasure look in 2005, and the best surprise in the line this year was the #67 Jeep Rescue concept truck from the 2004 Detroit Auto Show. The Cummins diesel-powered Rescue was a big Jeep, with 123-inch wheelbase and 37-inch tires, so the scale of the Matchbox model is 1:70, a little smaller than the other Jeeps. Two years later, some of the Rescue's design features are going into production on the new generation of the Wrangler. 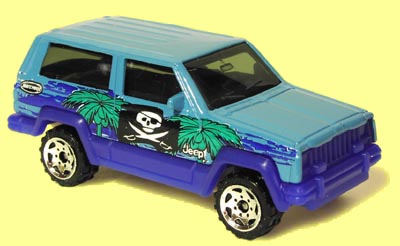 The pirate theme was obviously a big thing at Matchbox this year. In addition to contests, tattoos and treasure chests on the bubble pack cards, there was a 5-pack of pirate vehicles. It included both an XJ (left) and a pirate gold Compass (60K JPEG).

For the law-abiding side of the nautical world, there was a Lifeguard Cherokee (60K JPEG) as well as a Shark Patrol Compass (40K JPEG), both in "Action Launchers" sets. 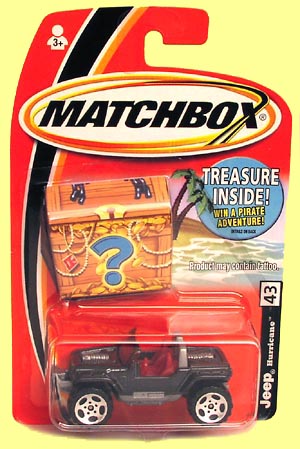 Ever since Automobile magazine pronounced the CJ-3B one of the coolest cars of all time, DaimlerChrysler's recent mining of Jeep history for catchy concept names makes a lot of sense. The 16-cylinder Hemi-powered, four-wheel steering, Jeep Hurricane concept was named after the Hurricane 4-cylinder engine found under the CJ-3B's high hood. It was unveiled at the 2005 Detroit Auto Show and was followed quickly by the #43 Matchbox model (1:58 scale).

A Superfast version also appeared, and Bob Keniston points out that it has some extra detailing in the form of red and silver paint on the taillights and headlights, and the Jeep name stencilled on the front. There was even a military version (40K JPEG) of the Hurricane.

Meanwhile, DC's Jeep Willys concept showed up again in a nice muddy version (60K JPEG) in an Off-Road 5-pack, and a green one (80K JPEG) in a 5-pack decorated with Ed, Edd n Eddy (a cartoon with which Matchbox apparently shares a demographic). 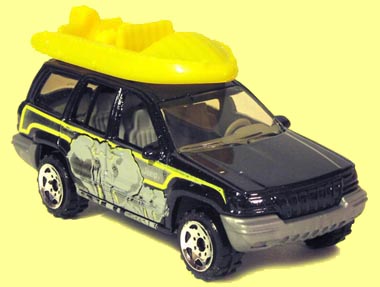 From concepts that will never see production, to models that have been out of production for some time:   Matchbox loves the WJ Grand Cherokee with the inflatable boat. They recycled it again in a 2005 "Safari" 5-pack (no relation to the Safari Action System Pack #5 from 1998).

If they'd asked me (ha ha) I would have suggested the WJ as a natural for a "pirate" paint job (see the XJ and Compass above). I mean, what self-respecting pirate would be driving around in a Compass, Jeep's first entry into the "crossover utility vehicle" market, when they could have a Grand Cherokee with a Zodiac on top? 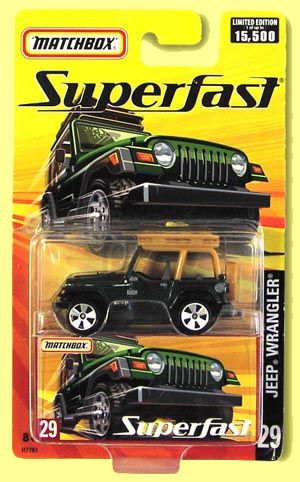 Better in that Safari pack would have been a zebra-striped version of the Matchbox flatfender, which could have tied in with the Jeep on the "Photo Safari" float at the Tournament of Roses Parade 2006. It's still unbelievable to me that Matchbox invested in re-doing the flatfender casting for the Elvis Surrey, but has only used it for a couple of lame issues since. Open-body Jeeps are still selling well, but apparently there isn't room for both a CJ and a TJ, so probably The CJ3B Page Collection will never happen...

Clearly the Wrangler is a good seller, as there were several unimaginative new versions (80K JPEG) in 2005. Maybe somebody involved in the continuing Superfast series was bored, since it's no longer a 35th Anniversary series. Now it's just another 1 in 15,500 limited edition, so "why not try green and blue for another 31,000 sales?"

And the wheels were at least a bit of an improvement over the 2004 Superfast edition (90K JPEG). 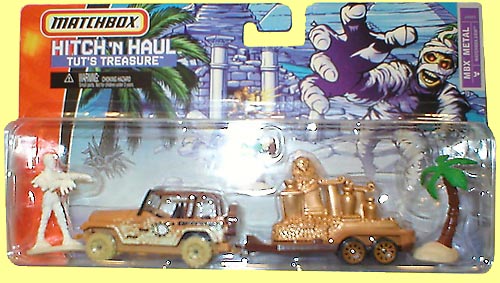 Even better were the big, dirty wheels of the Wrangler in the "Tut's Treasure" Hitch 'n Haul set (50K JPEG). It was the first interesting version of the 1998 TJ casting in some time, and there were some changes to the casting and the baseplate on this edition of the model.

This Jeep pulling a trailer of booty from a pharoah's tomb, ties in pretty well with the pirate theme. It came out late in the year, and may have also been partly inspired by the success of the movie Sahara -- and the success of the Jeep merchandising tie-in with the film.

Too bad Matchbox didn't notice there was also a CJ-3B in Sahara. This got me thinking again about the disappearance of the Matchbox flatfender casting. I've been complaining about its demise since the year 2000. It returned with a facelift the following year as the 1960 Surrey, but has made only a couple of minor appearances since then. Why doesn't Mattel think there's a market for historical Jeeps? 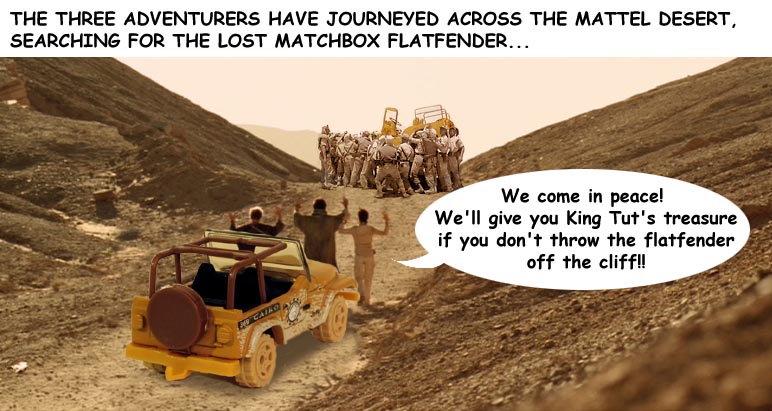 To illustrate my suspicion of of some kind of a conspiracy to dump the flatfender (above), I used a background composed of a frame from Sahara (150K JPEG) and a photo from Jeeps in the Spanish Sahara.

Thanks to Mike Albright and Bob Keniston for photos. -- Derek Redmond