Jeeps from the dragstrip: the inspiration for several new small diecasts over the past few years. On the left above is the 2002 "Military Jeep" in 1/64 scale (except the engine!) from the "Muscle Machines" series by Funline.

On the right is a 2009 Hot Wheels casting, which is available in a few different military (50K JPEG) and safari (60K JPEG) paint schemes. Collector Jarek Skonieczny wasn't too pleased when he saw that Hot Wheels chose a dragster for their new Jeep: "Perhaps the only Jeep I have that comes with a parachute," he said. "But I guess a new Jeep toy is still a new Jeep toy and this one definitely lives up to the Hot Wheels name."

I admit I wasn't too impressed with Hot Wheels either, especially because the toy is labelled as a "1942 CJ-2A." (The CJ-2A was buit by Willys-Overland from 1945-49.) But after doing a bit of research into the history of Jeep-based funny cars on the drag-racing circuit, I think maybe these Jeeps do deserve a bit of recognition from the diecast toymakers.

Between the lanes above is a 1/64-scale starting line Christmas tree (1-3/4 in. tall) from the Johnny Lightning "Head 2 Head" series of dragsters, which didn't include a Jeep. 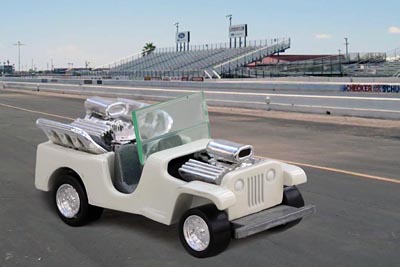 Johnny Lightning made up for that with their "Beep Heap," a unique casting (#074) introduced in 2001 for their "Lost Toppers" series of Topper Toys concept vehicles that never made it to production. This Beep was photographed by CJ3B.info at Firebird Int'l. Raceway in Arizona.

In addition to the most common white version, there were unfinished, blue and metallic red versions (see JLCollector.) A custom limited edition was part of a 2006 Christmas charity set (70K JPEG). The casting was retired in 2007. 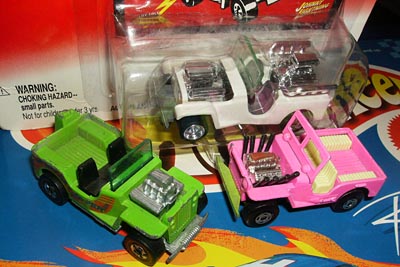 The card included in the Beep Heap packaging (140K JPEG) suggests that this Lost Topper was based on a concept drawing from 1971. That date corresponds pretty closely with the introduction of the Hot Wheels Grass Hopper and the Matchbox Hot Rod (seen here) but it's not clear which company had the idea first.

Update: In their 2010 Neo-Classics series, Hot Wheels has re-released the single-engined 1974 version of the Grass Hopper seen here, as the Mountain Goat. An earlier Grass Hopper had dual blown V8's like the Beep Heap. But a notable difference is that the Beep Heap is the only one of the three with underside detail showing 4WD. 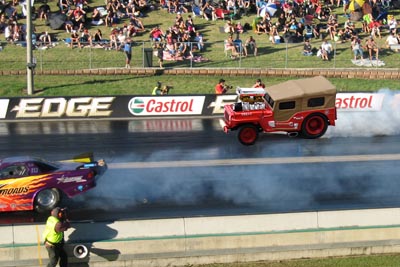 The Funline Muscle Machines diecasts first appeared in 2000 with five 1/64 models of street rods and drag racers, and have added over 60 more since then. Unfortunately they all have oversize power plants. The "1942 Military Jeep" is very sharp in metallic red, and is available in other colors including military OD (see the bubble pack card, 60K JPEG) and tiger or zebra stripes.

CJ3B.info splashed some bleach on this dragstrip so we could get a shot of the Muscle Machine laying some smoke (230K JPEG).

You could easily be unaware that these apparently overpowered toy Jeeps are inspired by actual vehicles, because the real Jeep dragsters are little more than a footnote in the colorful story of funny car racing, which is populated largely by muscle cars, and compacts like Novas and Pintos.

Funny cars had their heyday in the 1960s and 70's, although they're still popular on show and racing circuits today. According to Danny White of 60sFunnyCars.com, "The first Jeep funny car was created in late 1966 in California by veteran dragster racers Ed Lenarth and driver Roger Wolford. 'Secret Weapon' was one of longest wheelbase cars of its era. It was stretched outrageously at the door opening. The Secret Weapon could run with any funny car of its era, which struck fear into the hearts of the other racers. NHRA decided in early 1967 to outlaw Jeeps and other truck-based funny cars, along with aluminum frames. The powers that be at NHRA were solicited heavily by the other factory camps to do this to the Jeeps.

"The Secret Weapon (50K JPEG) was an ugly duckling at best, with its camo paint job and spartan engineering (80K JPEG). The biggest problem the Wolford and Lenarth team had was consistency. The car would blow the tires off on one pass, break the transmission on the next, then set the low ET. The team managed to win the 1967 Cars Illustrated Funny Car Nationals, but by the end of 1967 the Secret Weapon tour was over. The team separated, but Ed Lenarth was not done with the Jeep funny car scene." 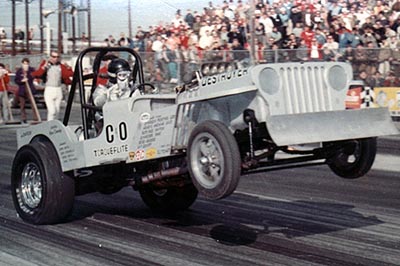 Meanwhile, California racer Gene Conway went into funny cars and chose the Jeep to stand out from the crowd. His "Destroyer" looked more like a Jeep than the Secret Weapon did, with a stock back end and a stretched front end with an open engine. The car was a major player in 1967 when it ran consistently, and was the most successful Jeep funny car of all time. But the Destroyer was just a flash in the pan, and Conway replaced it with a new Firebird in 1968. 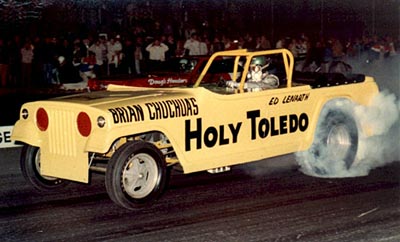 Holy Toledo was built with a Jeepster Commando body by Ed Lenarth and Brain Chuchua in late 1968 after the breakup of the Secret Weapon team, and became successful and well known in non-NHRA races until 1971. Lenarth then took the Jeep into sand racing, where it continued to win. Since 2000, Lenarth has restored the car for the show circuit, and built a new updated version for drag racing. 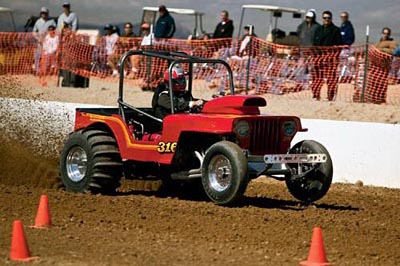 Of course sand racing is still a great place to see high-performance 2WD Jeeps. This photo of Fred Russo's flatfender is from Harry Wagner's Jeep Sand Drag Racing in the October, 2009 issue of Jp magazine.

The concept drawing (50K JPEG) from the Hot Wheels website makes it clear that their CJ-2A toy is based on a sand racer with paddle tires, although the parachute confuses the issue. 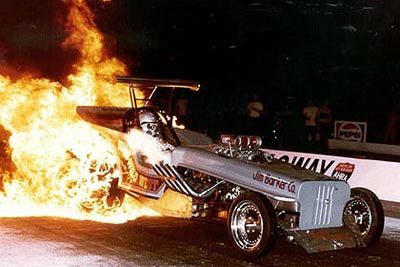 Back in the 1970's, Danny White says, "The sand drag racing scene had many Jeep funny cars, but if you wanted to drag race one, where would you go? AA/FA racing had the wildest machines ever to traverse the quarter mile. By the late seventies, these cars had no official place to race and were outlaws to say the least."

Jim West from Arizona mounted a modified sand racing body on his AA/Fuel Altered dragster called Wild, Wild West for the latter part of the seventies. He got the silver Rodeck-powered Jeep to run a 7.09 ET at 190+ mph. 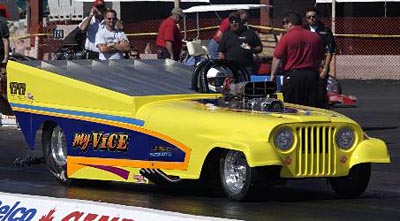 A more recent attempt to run a Jeep in IHRA sanctioned drag racing was by Canadian driver Joe Lilienthal who qualified his wild, left-hand-steer 1982 CJ-7 called "My Vice" with a 6.64, in the Top Dragster class at the ACDelco Nationals in 2003. The IHRA then decided his Jeep didn't fit in the category, and he was out. Same old story.

Check out a run by My Vice on YouTube. 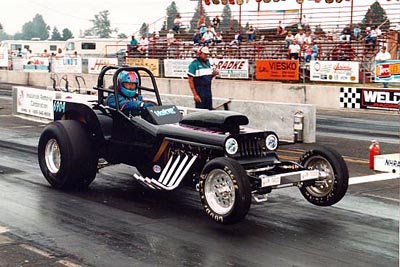 A few more photos from around the web. Anybody recognize the location of what appears to have been an NHRA event, or the owner of this little dragster, which bears some resemblance to the Hot Wheels CJ-2A? 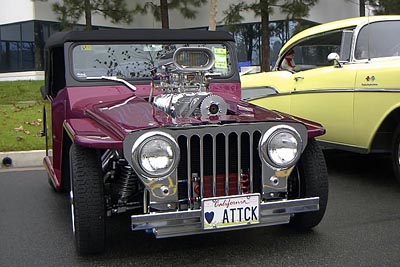 This flatfender street rod in California will never likely see a dragstrip, but it's a classy show car with a 1948 Jeepster feel. Anybody know the owner of this one? 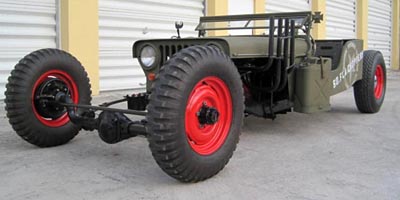 Yeah, I think the handful of Jeep hot rod models we have is justified, and there are a few more real-life Jeep racers that would make marketable collector's diecast toys. "Holy Toledo" is very popular on the heritage circuit, and "My Vice" was a real head-turner. How has the Hot Wheels CJ-2A dragster been selling?