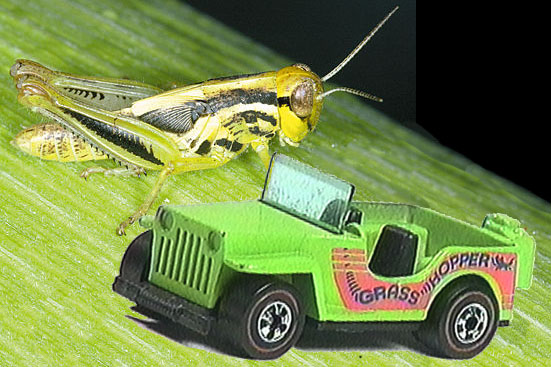 The Grass Hopper is probably the perfect Hot Wheels Jeep. It's the least accurate and authentic of the three diecast 1/64-scale Hot Wheels Jeep castings used in the 1970's and 80's, but it certainly reflects the oddball customized design style that Hot Wheels has become known for. 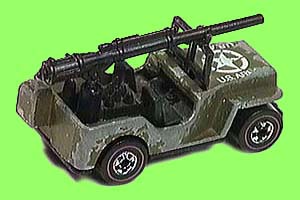 The solid-hood Grass Hopper (above) was the last and apparently rarest version, appearing in 1975 and using the same casting as the World War II "Gunslinger" jeep which was also released that year. The front grille with slots of different heights was perhaps intended to look like the Willys MB grille. 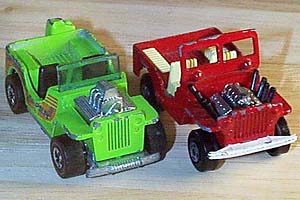 The earlier Grass Hopper body had a grille with seven tall slots between the headlights, which made it look like a CJ-3B. The 1974 hoodless version with one large V8 engine, was similar to the Matchbox Hot Rod Jeep seen in this photo by Jarek Skonieczny. 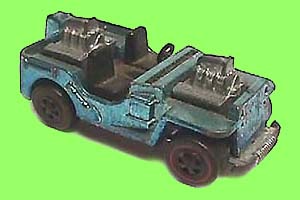 The first Grass Hopper, released in 1971, had twin V-8 engines front and back. The body sides carried a shovel and pickaxe, and a water canteen on the driver's side. It came in a variety of colors including green, blue, pink and purple, and had a plastic roof (20K JPEG).

An underside photo (20K JPEG) by Frank Sanborn shows a full set of exhaust pipes for both engines cast into the metal base. That detail continued to appear on the single-engine Grass Hoppers as well, including those with a plastic chassis. 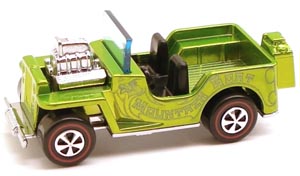 Big news for 2010: Hot Wheels has re-released the Grass Hopper in their Neo-Classics series, as the "Mountain Goat." The paint is now "Anti-Freeze Green" and the graphic lettering on the side is similar to the original Grass Hopper design. See the Neo-Classics bubble pack (80K JPEG).

See also More Hot Wheels Jeeps for other releases of the 2000s.

Thanks to Marlin Rice of Iowa State University for the photo of the real grasshopper. -- Derek Redmond