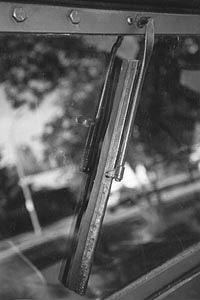 A manually-operated wiper was fitted to the passenger side of the windshield on most CJ-3Bs; a second vacuum-operated wiper motor was an optional extra.

The manual wiper used on WW2 military jeeps and CJ-2As, with their fold-out ventilating windshields, had a short arm. Some CJ-3Bs have the ventilating windshield and will accept the short-arm manual wiper which is mounted about 1/2-inch from the glass, as seen on Derek's 3B in the photo. Because it's hung from above, and may tend to drift down the windshield, Lawrence Wade suggests: "Just place a thin washer, firm rubber or soft plastic between the existing washer and the windshield. This will pull the wiper close to the windshield and create enough friction to hold the blade in place."

The only manual wiper currently available new from vendors, is designed to work on Jeeps with that foldout ventilating windshield, and is too short to effectively wipe a wide arc on the standard CJ-3B windshield. On the standard windshield the wiper is mounted on the sheet metal frame about 1-3/4 inches below the glass (see the photo at the bottom of this page.)

On the CJ-3B Bulletin Board an easy alteration was mentioned; simply cut the arm and weld in a rod that extends the arm to 8-1/2 inches. The wiper will then look like the longer one below.

This CJ-3A/B style manual wiper with the rubber rotted out came to me dangling from the windshield of a CJ-3A I bought at a yard sale. I doubt that it had ever been used on my 3A because it was missing a mounting bracket and there were no screw holes to mount the bracket. At the time I didn't realize this wiper was no longer being sold. Mine was very rusted but there was enough paint on both the blade section and the handle part to suggest that the original color was black.

This is the original metal bracket required for the wiper. It should be fairly easy to reproduce with some 1/2 x 3/4 (or 1) inch stock. Note that the flathead screws should be countersunk as in my wooden bracket seen below. See also Derek's ventilated windshield installation with the original bracket (30K JPEG); the nuts are not original.

By chance I saw the identical wiper being used on a Model T Ford restoration. I was able to examine it closely enough to see that it used a mounting bracket made of an oak block drilled for mounting bolts and axle. I used an oak block for my mounting bracket and it seems to work fine. Perhaps maple, being denser, might have been a better choice. If it fails I will fabricate a metal bracket. (I learned recently that the correct wiper for Model T's is different from those used on Jeeps. The first experimental Jeep by Bantam had only one manual wiper, which appears to be identical to later ones used on jeeps. Like many other parts it undoubtedly came from available parts rather than being made specifically for the Bantam.)

The drawings below show parts for the 3B manual wiper, including my homemade wooden bracket. 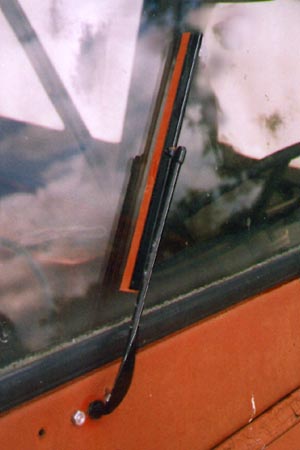 After installation but before adjustment, this photo shows the full swing of the arm and blade, which would be impossible with the short wiper arm of the CJ-2A-style wiper. The hole to the left of the wiper is the mounting hole for the Taiwanese electric wiper motor I just removed. The arm can be bent at the flattened area to adjust.

Originally I used 1/16-inch rubber gasket material for the rubber blade. It was clearly a little thin, but with caulk holding it in it might have worked fairly well. Bruce Mullen, a CJ-2A owner, kindly sent me a sample rubber strip about 1 inch wide and 1/8-inch thick. This appeared to be a better thickness for my blade. I trimmed it down to 9-1/2 x 3/4-inch and made sure the straightest edge would be the one touching the glass. This is important to get a clean wipe. It appeared that the rubber would not slide into the blade holder easily. It was too thick and needed a lubricant if it was going to work. I experimented with a small section of rubber and determined that it would go in without having to open the blade holder further, if both the blade holder and the rubber were lubricated with liquid soap. Do not use oil or grease as a lubricant as it will ruin the rubber blade. If even then you have trouble you can carefully trim one edge so that the edge to be inserted in the holder is slightly wedge shaped.

I later found some sheet rubber at Farm and Fleet which comes in 3/32-inch thickness. This should work the best if you can find it in large enough sheets.

Marine wiper: It should be mentioned that there are alternative to the Willys Overland style manual wiper. As I understand it this wiper is made specifically for marine use and is sold in marine supply stores as an accessory. JC Whitney used to sell this wiper (or a very similar one) for Jeep use.

I have seen this wiper used in an early 1930's Chevrolet restoration. It worked fine and looked nice but the owner expressed frustration at not having an original-style wiper. The arm is adjustable to between 8 and 12 inches. The blade is a little long for Jeeps (11 inches) and might have to be trimmed. Shorter blades are available. This system needs no bracket to mount on the windscreen sheet metal.

Model T Ford parts suppliers also sell manual wipers for restoration. My understanding is that they will not have the wide flattened portion near the base of the arm. Ask about arm and blade length etc. I could not find an illustration of these wipers. -- Bart McNeil

Bob Christy: "Like Bart, I've been working on a manual wiper. Mine had the threads busted off and has lots of rust pits to deal with. Since the threads were broken off, I was going to weld a new threaded piece onto it. The simpler solution was to file the broken end flat, then drill a hole into the end and tap it for a screw. Since there really is no pressure, it seems to work pretty well. I put a washer on it so the screw would hold the handle in place. After filling in the rust pits, I used my specialized paint process (I paint small parts with ceramic engine enamel, bake in the oven around 120 degrees for 1/2 hour, then shut the oven off and let it cool before removing the parts).

I found a stainless 10" wiper blade at a hot rod shop that I had to modify to make work. I filed the rivet out of it and drilled the hole a touch larger. I attached the blade to the arm with a stainless cotter pin, cut down to size. During installation, I added a nylon washer between the arm and the windshield frame and lubricated it with candle wax as suggested elsewhere on this page. After putting the wiper arm on and having it there for a day, I noticed it was loose. I determined that the little bolt I used to attach the handle was coming loose with use. I took it off last night and put lock tite on the threads. By the way, it took me only 6 months to find this wiper arm."

Scott Blystone: "With regard to the rubber in the manual blade -- I bought one of those JCWhitney replacements for handwipers. The rubber pulled right out and is a great fit for the original manual wiper - it's even tapered like a wiper blade should be. Its two inches too long, but that is easily remedied. I will be putting it in with clear silicone. As long as I put in a continuous bead, I should be able to pull it out again in the future if need be."

Thanks to Bart for the drawings and description. -- Derek Redmond