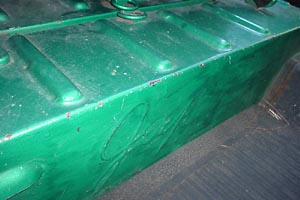 Civilian flatfender Jeeps -- the CJ-2A, 3A and 3B -- didn't have a glovebox in the dash, but they did have a toolbox under the front passenger seat. The hatch could be opened when the seat was tilted forward, and there was room for a jack and a few other bits and pieces -- but you probably wouldn't want to keep your gloves in there.

A slightly mysterious feature, which some Jeep owners have never even noticed, is the "Jeep" name stamped in script lettering on the front, just above the floor. More on that stamping further down on this page. 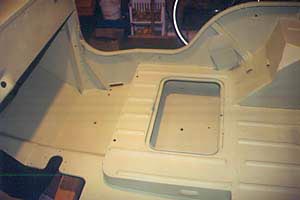 Most Jeep owners would like a toolbox that looks like this one on a 1956 CJ-3B restored by Piet Versleijen and seen here in primer. But because of its location and its tendency to collect water and crud, it more often it looks like what Randy Merritt found (90K JPEG) when he dug his '62 3B out of the weeds along the roadside and brought it home. Or in some cases it's history (40K JPEG) -- having been removed to allow the installation of some replacement passenger seat.
Reproduction toolboxes are available from some parts dealers. It would be a fairly difficult assembly to fabricate from scratch, but sometimes people are looking for the basic dimensions so I've included them on the photo below, of my '59 CJ-3B. 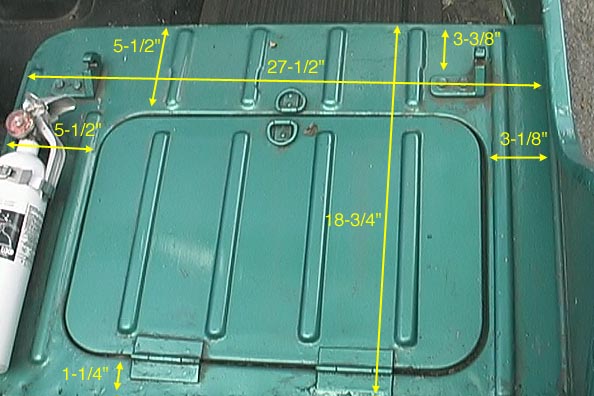 The curves on the corner and the lid are 2" (50mm) radius. (Sorry I don't have the metric equivalents for the dimensions on the photo.) 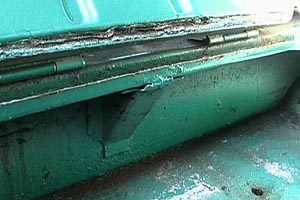 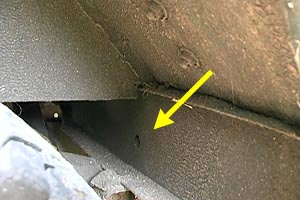 Water then exits through a hole behind and below the toolbox.

See a couple more closeups of the interior and underside of the toolbox in the "Body Tub" section of 1955 CJ-3B Details: A Photo Reference. 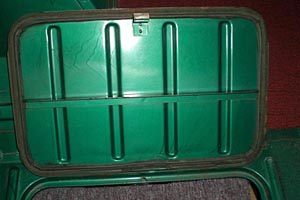 Lawrence Wade took this photo of the underside of his toolbox lid, showing the rubber gasket. It's in remarkable condition for an unrestored Jeep. 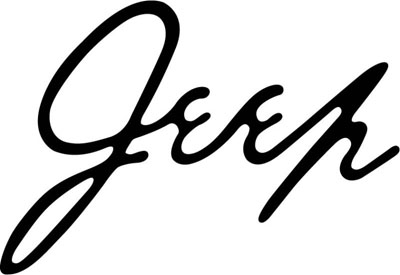 Speculation on the reason for the hidden "Jeep" stamping behind the passenger's feet, suggests that it was put on the CJ-2A in 1945 to help Willys establish its copyright on the word. At the same time they wanted to advertise the name "Willys" which was stamped prominently on the hood, windshield and tailgate (where the early CJ-2 prototypes had been marked "Jeep" or "Agrijeep".) The trademark was finally registered in 1950, but perhaps out of habit the stampings were left the same until the new CJ-5 appeared with "JEEP" stamped on the outside. (Willys also continued for some time to put the name "Jeep" in quotation marks in its advertising.)

Bart McNeil provides some background: "There appears to be a few sacred cows in (J)jeepdom, and one of them is in regard to the word 'script'. If you ask a military jeep collector whether there ever was a 'script' stamping on a Willys MB he will point to the rear of a 'slat grille' 1942 model and show you the name 'WILLYS' stamped in block letters. You may look at him questioningly and he will insist that because of that stamping this Willys MB is a 'script Willys' jeep. You can't win the argument, so don't even try.

"The origin of the 'script' argument goes back to the very early 1940's when Ford, perhaps a little embarrassed at having to manufacture a vehicle to meet Willys' specifications, decided to get a little free advertising by stamping the Ford (script) logo on the rear of their GPW's. They also marked any other part they could with the Ford script 'F', even many bolt heads. Willys followed suit and stamped their own rear ends with 'WILLYS' in block letters as we know them from our later 'WILLYS' stampings. Military jeep collectors decided to identify those stamped Ford GPW's as 'Script' Ford jeeps. Because the Willys jeep was also stamped (although in block letters) the Willys jeep was referred to as a 'Script' Willys. The government put an end to this practice of stamping logos in 1942.

"The stamping on the front of the flatfender CJ toolbox is, to my knowledge, the only true script stamping on any Willys Jeep, military or civilian. No one seems to know anything for sure about it, but the world of Jeeps (and jeeps) is full of these little mysteries and inconsistencies. There are still probably as many questions as answers, and only the surface has so far been explored."

Thanks to "60CJ3B" for the script illustration, and Rob Baens for the photo of the tub without toolbox. -- Derek Redmond