(for Any Sized Tire on any Vehicle, but Preferably for Your CJ-3B) 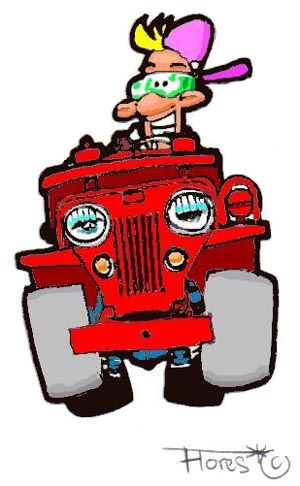 To find the perfect pressure for your tires, don't believe what the manual says. Rip that page out. You may have altered the weight of your beloved jeep, gone for bigger tires, or even changed the type/brand of tire from what the boys at the factory had in mind. Besides, we've learned a lot about rubber since Barney wrote the manual.

Understand that the pressure does not hold yor vehicle up. Nope. It's the volume of air. A larger tire will require less pressure to contain the same volume and support the same weight compared to a smaller tire. 31 X 10.5 BFG AT's need less than ten PSI to hold up a CJ-3B, and get the best traction and tread wear. Optimum front tire pressure is likely to be higher than rear 'cuz of the engine weight, wenches, winches, etc. The pressure is optimum when the weight is spread evenly laterally across the tread. Most Jeepers run about 2X optimum pressure and wonder why their tires only wear in the center. The reason is simple: the outer edge of the tire ain't touching the road!
The quick and dirty check: Quit reading this, get out yor charge-em-up card that's maxed out on Jeep parts (maybe tires), and go see if you can cram it under the outer edge of yor poor over-inflated tire's tread from the side, straight under the hub. If it slips in an inch or two, we've got a gross tire pressure error.

Calibrating tire pressure: Get a refill for your chalk line. Be sure and get a purdy color. Squirt some across the full width of the tread on the front drivers side and on a rear tire. Smear it all around with yor hand, so it's thickness is nice and even. It doesn't matter how much is there fore/aft, but it has to go the full width.

Slowly idle down the road, while you watch the purdy colored mark spinning round and round on the front tire. Don't run over the neighbors' kids. When the chalk starts to wear, stop, adjust pressure, try again. If it wears off on the outer and inner edge, you're under-pressured. If it wears on the center, you're over pressure. Continue the process until even wear is obtained. If it won't get even, you or your Jeep may have an alignment problem.

If you have big tires on a little Jeep, you will likely find other limitations keep you from reaching optimum pressure. I'm scared to go 55 MPH with less than 10 PSI, and steering gets awfully hard when going slow. I'm already a tuff guy and don't need more muscles.

Lower tire pressure makes a big difference in ride quality. The trade-off if running manual steering, is greater steering effort, especially when not rolling, such as when parking. When she's underway, the difference in effort in negligible. The difference is also negligible when under low traction situations.

Another complication is when you go into 4WD. You need the rolling radius to be the same for the front tires and rear. Rolling radius is the radius of the tires as they compress under the weight of the Jeep. I find it easier and just as effective to measure from the bottom of the rim to the street. If you want to be able to toss it in 4WD anytime, calibrate the front tires to optimum pressure and adjust the rear for the same rolling radius. If it's really slippery, it won't matter, except it will handle a lot better if all the tires are the same size.

Now, for off road use, I feel the lower the pressure the better, as long as there's a good inch or two between the rim and the ground. Unless you're into high speed stuff, 3 to 5 PSI, but equalize the rolling radius. Get a tractor tire gauge to measure low pressures (yup, the boys on the farms have been running those heavy tractors with low pressure in the massive meats for years: air volume). Your car tire gauge doesn't have the resolution to measure 3 PSI accurately.

Thanks to Jon Paulsen for this tip, and to Roberto Flores for the cartoon. -- Derek Redmond