There is some advice from the Bulletin Board on fine tuning a running F-head in Timing and Tune-Up Tech Tips. But what about if the engine won't start, or you're just finishing re-assembly? 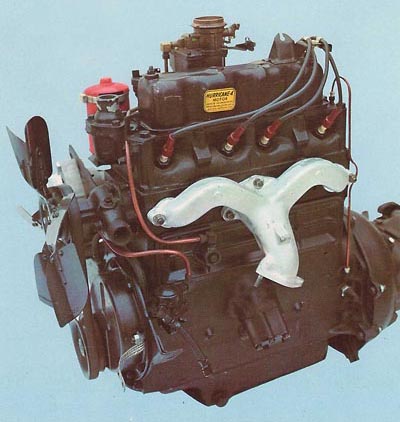 Bruce: "My engine was frozen solid. After pulling it apart, it is time to reassemble. Since I have rotated the engine many times with the oil pump and distributor removed, how should I static time the engine? My oil pump has the shaft and gear on it that engages the cam, how do I ensure that it is in the proper postion to accept the distributor at the correct timing angle. I understand that I could be 180 degrees off. I don't have a problem with that -- problem I'm having is how to install the oil pump in the proper postion."

Wes: "If you had the service manual it would only take 2 minutes to find it. It is 3/4th's of a page so I won't burn up a lot of typing time here. The easiest way is to temp install the distributor with the rotor pointing at the #1 spark plug wire in the cap. Get # 1 piston TDC on compression. Look in the oil pump shaft opening and insert the oil pump so that the slot aligns with the distributor. You really should buy the service manual."

Steve in Pittsburgh: "(From the Jeep Universal Service Manual)

"Rotate the engine to TDC for #1 cylinder, with the marks on the timing gears aligned.

"After priming the oil pump with engine oil and rotating the pump several times back and forth, fill the pump with engine oil again to overfilling. With the gasket in place on the pump, slide the pump partially into the block. Have a helper hold the pump in this position, just short of the pump's gear meshing into the camshaft gear. Use a long slot-blade screwdriver to rotate the pump to the 9:30 position with the wider of the two halves of the shaft on top. Then push the pump the rest of the way up into the block and bolt it up hand-tight.

"Use a flashlight and look down into the block and the slot in the pump should now be in the 11:00 position. The wider portion of the shaft should still be on top. The distributor will only drop in one way. Once it is in and bolted down, the rotor will be pointing to the #1 plug wire."

Keith: "I've done a carb overhaul and am now checking the timing. What I seem to have is when #1 cylinder is at TDC my timing mark on the pulley is off 180 degrees or so. My first question: is the '54 F-Head using gear to gear or a timing chain?

"Second question then is what would be the possible cause or causes for the timing mark to be that far off. Slipped timing chain if it is a chain, but what if it is gear to gear?"

"Now, if you absolutely have to fix it, remove the distributor and the oil pump. Turn the engine over by hand until you have it at TDC according to the timing marks. Now, looking at the top of the oil pump shaft, turn it so the slot is at the 3 and 9 o'clock position, with the larger side of the shaft facing up. Slide the pump back up into the block, while a friend watches down in the ditributor hole with a flashlight. When the pump is seated on the block, the slot should now be pointed at the 11 and 5 o'clock positions. Drop the distributor into the block and bolt it down with the rotor in the 1 o'clock position and it should fire. Now you can time it with a timing light.

Bruce W.: "You will want to be sure that when you turn the crankshaft to bring the timing mark to TDC that you are bringing #1 up on the compression stroke and not #4. Remember that the crankshaft turns 2 revolutions for all 4 cylinders to fire. #1 and #4 take turns, same with 3 and 2. One way to be sure is to remove the #1 spark plug and put your thumb over the plug hole while you turn the crank. When you feel air being pushed out as the mark comes up, you know you've got #1.

"On second thought... I don't see how this can be, if the engine runs. When the timing mark is 180 degrees away, #1 and #4 should both be at the bottom of their stroke, and #2 and #3 should be at the top. Only way for it to run, seems to me, is for the front pulley (balancer, if you wish) to be 180 off. Maybe the key is gone or stripped. Then the pulley/timing mark is lying to you. I've seen this on small-block Chevys and others. In fact I had a Flathead Ford do almost the same thing as Steve describes."

Keith: "I don't think the key is sheared off the front pulley, but I will check that tomorrow.

"The thing is not running... yet. I think what has happened is that as Steve suggested, someone has messed with the oil pump and/or the distributor. I have it firing now, with popping and flames from the carb, telling me it is still a timing issue. I think I need to retard the timing, but the cast knob on the distributor doesn't permit me to retard it any further. I think I will move the plug wires around one position and see if that will allow me to retard it and get it closer.

"I really don't care if the timing marks line up, since I will probably time it by ear, but can you simply pull the distributor out and rotate it rather then messing with the oil pump as Steve suggested?

"Can sticking valves also cause flames from the carb?"

Ernie: "Yes, sticky valves can cause backfiring throught the carb. The distributor can only be installed one way because of the offset drive, but you can move the plug wires anywhere you need to and I suspect that your problem is timing, and/or the firing order is incorrect. If you need to, remove the valve cover and watch the valves on #1 (both closed) to make darn sure that you have TDC. Then move the plug wires and or rotate dist. to line up #1 with the rotor and make sure that the firing order (1342) goes around the cap in a counter clockwise direction -- that is the most common error. Provided that you have no other serious problems it will run."

Steve: "Popping up through the carb is a symptom of retarded timing, not over- advanced timing. The only way to truly know where you stand is to follow Bruce's suggestion to be sure you have the engine at TDC on the #1 cylinder's compression stroke. Then, readjust the distributor to where you have the distributor rotor pointing toward a particular tower on the distributor cap, and that will be the #1 wire. Install all the other wires in reference to #1, using 1-3-4-2 in a counter-clockwise direction and it should fire over."

Jyotin: "If you set the points correctly you'll achieve the 42 degrees of dwell. Timing is 5 degrees before TDC. Finding the timing marks can be fun; usually it is a small notch in the rear pulley and two small marks on the front engine cover. Sometimes there is a special indicator that is mounted on the front engine cover, but more often than not it is only on the engine cover and covered with years of grease.

"Aftermarket pulleys that I have seen do not have a notch which complicates the matter.

Note: see Timing and Tune-Up Tech Tips for illustrations from the Jeep Universal Service Manual and more advice on adjusting the timing.

Todd: "Just rebuilt the entire '53 CJ-3B, all stock, engine has only 19,000 miles, but I'm unable to get distributor timing to get engine to start. What position is the rotor on #1 piston?"

Bob: "One way of seeing where your timing is, is to take the #1 spark plug out. Disconnect the coil wire. Take off the distributor cap. Put your thumb over the spark plug hole, Now have someone turn the engine over and when you feel pressure against your thumb, look at the position of the rotor. This will give a rough idea of where TDC is. Also it will tell you plug wire placing on the cap in relation to rotor rotation. Hope this helps. 1342 firing order."

Jyotin: "You need to be sure that you set all the timing. The valve timing was set when you mated the crankshaft and the cam gears. The little 'O' marks needed to be aligned. If you didn't do that then I wouldn't even try to start the engine until you did.

"A common problem here, and I've done it myself, is to adjust the point opening assuming that the distributor rotated clockwise. If you do this you'll be way off and it won't start.

"Now, put the rotor button on and the button will point towards cylinder #1. It should be in the 5:00 position, but not always. Firing order is 1-3-4-2 -- counter-clockwise again.

"Set point gap. It should start, but will need to have the timing adjusted with a timing light. When you set the timing with the timing light it should be at 5 degrees before TDC as indicated by the left notch on the rear pulley and the two lines on the front engine cover.

"Set idle - it is supposed to be around 700 rpm, but I generally set mine a little higher.

"Check dwell -- if not 42 degrees (or thereabouts) then readjust points, and reset idle.

Thanks to all the contributors. The photo at the top of the page is from an EBRO Jeep brochure from Spain. The engine cutaway view is from the CJ-3B Parts Manual. -- Derek Redmond

Note: for detailed service instructions, see the Jeep Universal Service Manual. A reproduction is available for sale at many Jeep parts dealers.