On the Jeep, the resistance of the fuel sender drops as the fuel level increases. I'm specific to Jeep here as the military (maybe old standard by now) is backwards--the maximum sender resistance is when the tank is full.

The usual sender failure causes an empty reading. Sometimes intermittent correct and empty readings will happen. (On my CJ-5, the gauge would read normally until about 1/2 full, then it would read empty until only about 2 gallons of gas was in the tank. The reading would jump to Full and stay there until the tank was empty. This got me into trouble the first week that I drove this Jeep.)

To test the wiring: With the center screw terminal on the tank's sender grounded, and the ignition switch on, the gauge should read full. Leaving the center screw terminal grounded and turning off the ignition switch, should cause the gauge reading to drop to empty. If it does this, everything is wired correctly and the fuel tank sender is most likely bad.

If your stock 6-volt fuel gauge reads full until the tank is nearly empty and only then moves slightly"downward", your fuel gauge may be poorly grounded.

First, try loosening the clamp that holds the gauge in the dash and wiggle the gauge around. This may not work, but is easy to try.

If that didn't help, remove the gauge from the dash and proceed as follows:

Figure 1. Bend the crimp that holds the gauge's face onto the rest of the gauge.

Remove the two 3/8 inch nuts and the lockwashers from the back of the gauge.

Carefully push the gauge out of the case. Be care not to damage the gauge pointer or the small wires on the gauge.

Don't lose the four insulating washers. Two are slightly larger than the lockwashers and two are slightly smaller than the lockwashers. The two smaller ones fit into the holes in the case.
Figures 2 and 3. Using emery cloth or 400 grit sandpaper (DO NOT USE STEEL WOOL!), gently clean the brass contact on the gauge, the back of the inside of the case and the outside of the case. Perform a final cleaning on these surfaces with an alcohol soaked cloth.

Make sure the small insulating washers are on the terminal studs and put the gauge back into the case. The small washers will fit into the holes in the case and prevent the terminals studs from contacting the case. If the small insulating washers are not properly positioned, the gauge's terminals will short against the case. This could either make the gauge read full all of the time, or damage your Jeep's ignition switch.

Onto the terminal studs, install the two large insulating washers,then the lockwashers and finally the nuts. Tighten the nuts firmly, butdon't overdo it.

Crimp the front of the gauge back in place and reinstall the gauge inthe dash. It should now work correctly.

Ed Wilson asked on the CJ-3B Bulletin Board for suggestions on where to find new gauges: "I need to replace both the oil pressure gauge and the temp gauge/sending unit. I broke the tube for the temp gauge and am assuming that it cannot be repaired. I do prefer as original as I can find, new or used." 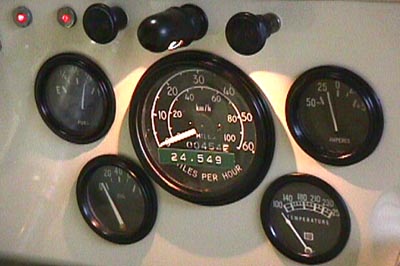 Scott Blystone: "If you just want something that works and looks fairly authentic, you can get them from JC Whitney. They have white needles and lettering, gauge ranges on dial are same as OEM, glass bezels are the dark olive/black color of originals. They don't hold up to side-by-side comparison with OEM gauges (left) but nobody just peeking into the window would think them out of place in an old Jeep.

These are not in the Jeep section of the JCW catalog, but are in the index under gauges. Said to fit Jeep and Ford. I decided to go this route and am pleased with how they look. There are plenty of old CJ's in junkyards with gauges I'm sure, but $45 to redo them with repros is not bad until originals can be located."


Buck Toenges: "I bought a 12-volt S-W fuel gauge and hooked it up to the fuel tank sending unit. It doesn't work. Carl Walck says the two are not compatible. What is the correct fix? Does anybody have a source for the correct 12-volt fuel gauge? Or can my old 6-volt fuel gauge be made to work?"

Stan: "Perhaps a voltage reducer would work. It's just a resistor put in series with the fuel gauge input voltage to reduce it to 6 volts. I used one on a 6 to 12 volt conversion I did once."

Buck Toenges: "I didn't tell you that the CJ-3B is a 12 volt system. Would this disqualify the resistor solution? The 12-volt fuel gauge is always reading full. Hooked up or not. Is the sending unit not compatible or is this the reason to use a resistor to drop the voltage to make the fuel gauge compatible with the sending unit?"

Stan: "I assume that at one time your Jeep was 6 volts and was changed to 12 volts. When you do this all electrical items must be changed to 12 volts. Some things are easier to keep 6 volt and just reduce the voltage to them. The sending unit is one of them. When I changed mine over I simply kept the gauge and sending unit 6 volt and put the resistor in series with the voltage to the gauge. I don't know why your S-W gauge isn't compatible with your 12-volt sending unit, but I would say that you need an S-W sending unit, and you would probably have to build an adaptor for it to fit the tank."

"If your gauge always reads full, then you've got something wrong -- I burnt out a fuel gauge just the other day, but it went to empty and stayed there, not to full. What's the temp gauge doing? If it works OK, then likely the fuel gauge is bad, but the regulator portion is OK." 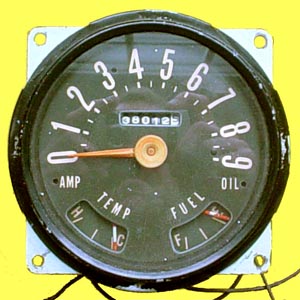 Starting with serial number 57348-34452 a new larger speedometer/instrument cluster replaced the set of five smaller gauges. It was either a King-Seeley p/n 911618 or later a Stewart-Warner p/n 913373 (right). The King-Seeley version can be recognized by numbers which are upright all around the speedometer. (See the same instrument cluster installed in an FJ-3A Fleetvan, 60K JPEG.) The oil pressure and amp gauges were replaced with warning lights; the water temp and fuel gauges were inside the speedometer housing.

Brett Chitwood found neither of those gauges was working: "Just got my restored '64 3B running -- gas gauge shows empty all the time. New sending unit, new tank; previous sending unit was not grounded, although I dont know if it worked either. Should this be grounded? The heat gauge shows hot as soon as the key is turned on. Any advice much appreciated." 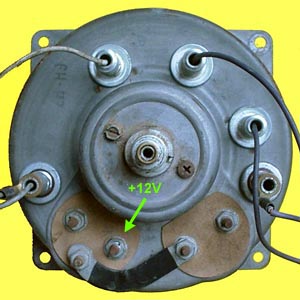 Jyotin: "I'd guess that the fuel gauge is burnt out. In some models the fuel gauge also contains the gauge voltage regulator. Or you have wired up 12 volts on one side of the temp gauge.

"If in your rebuild of the Jeep, you went from 6 volts to 12 volts, then you probably don't have the regulator at all. Not a problem, because the new fuel gauge you will have to buy anyway has the built in regulator. If you keep the temp gauge pegged for any length of time (3 - 5 seconds) you will burn it out too."

Chuck: "Then I am under the assumption that if someone were to go from 6 to 12 volts that this might affect the temp guage? Mine read very hot while 6 volts although not pegged (probably due to needed repairs). When I changed over to 12 volts, she pegs out super hot faster and faster the more I start her up. The 'shop' where she was to be fixed blew her head gasket along with some other unsavory hacking so I thought the temp reading was related to that. Any light you could shed onto this mystery would be greatly appreciated."

Jyotin: "The engine should not run hot. The gauge should not be pegged. If the system was 6 volts before, then I doubt that you had the voltage regulator in it at all. So, to get the instrumentation running OK, buy a new fuel gauge. When you get a new one, you need to specify that it is for a 12-volt system and you should get a 3 prong gauge from the vendor.

"I'd recommend Turner 4WD because they are ex-Jeep mechanics and understand this stuff. Unfortunately there are a lot of vendors who don't know much about Jeeps even though they sell extreme traction light bars, competition cup holders, and limited slip radios..." 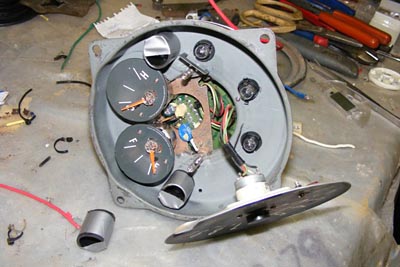 Greg Wilkens in Australia installed VDO instruments inside the original cluster (left) on his 1958 CJ-3B. He also added a protective rear cover (80K JPEG) that helps organize the connections.

"Now, turn on the ignition with the engine cold and the tank full. The fuel should register and the temp not deflect at all. If it does then check the circuit from sender to gauge. The sending unit could be bad or there could be a ground somewhere in the wiring.

"After all that works correctly then you can determine if the engine is truly running hot or not. If it is, and if the head gasket was changed, then I'd be concerned that the shop may have put the gasket in wrong or used the wrong gasket. There's not much else to go wrong... you have pump, engine, radiator, head gasket. if the mechanical parts work, then you have a blockage somewhere. Turner 4WD has gaskets too. Heck, their catalog alone is worth getting because of the cross referencing that they do between Jeep models."

Sam Nielsen: "I am installing a homemade wiring harness into my '53 CJ-3B. I am ready to connect the fuel tank sending unit to the fuel gauge. I don't know where it is supposed to be routed. Here are a couple ideas I have had, but I would like it to be done correctly:

1) Should the wire leave the sending unit on top of the tank, go to the driver side of the tub, along the vertical tub wall up to the dash and onto the gauge?

2)Or should it leave the tank on top, go around the tank and out where the fuel line enters the tank, and then along the frame with the fuel line, up to and through the firewall, and on to the gauge?"

Chad: "Mine was run along the driver's side wall and up to the gauge."

Eric Lawson: "The fuel gauge wire travels from the fuel tank sender to the driver's side of the Jeep's body (just forward of the fuel filler neck). At that point you will find a channel formed by the body contours. The wire fits up inside of this channel and follows it up to the dash."

Thanks to Eric, and the other contributors on the CJ-3B Bulletin Board. -- Derek Redmond