by Jon Hardgrove
The Carter YF carburetor first appeared in 1950, and enjoyed one of the longest runs (if not the longest) of any carburetor designed for original equipment use. The YF design was versatile enough to be calibrated for smog emission, and was used by some original equipment vehicle manufacturers through the 1986 model year. The YF was, and is, an excellent carburetor, if calibrated to the manufacturer's specifications. There are however, several issues of interest to CJ-3B owners concerning these carburetors.

The most common carburetor appearing on the CJ-3B is the number 938 (4 variations - 938S, 938SA, 938SC, and 938SD). In Carter's terminology, any consumer product consisting of 2 or more individual pieces was considered an 'assembly'. Each assembly would have the letter 'S' appended to the part number. As a carburetor is obviously more than 2 individual pieces (see the CJ-3B Parts List illustration, 60K GIF) the carburetor would have the letter 'S' appended, hence 938S. If a carburetor was updated with a 'major engineering change', it was Carter's normal practice to append another letter after the 'S'. Hence the first major engineering change would be SA, the second SB (the system was not infallible, as I have no record of a 938SB), the third SC, etc. Some of the items which were changed in the 938 series are: idle jets, main jets, metering rod, and pump delayer weights; all items which will alter the calibration of the carburetor. Also, not all of the changes were compatible (example - the SD metering rod would not work with an SA jet). 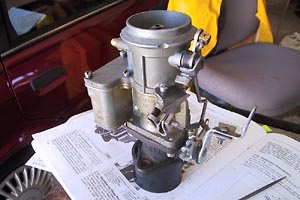 Note: the photo by Chase Myles shows a color differentiation between the different sections of two carburetors he combined.

Generic repair kits can be a problem. As the CJ-3B has one of the smallest engines to use the YF (the YF was used on the Ford 300 CID 6-cylinder,) some kits which may be offered may not have correct gaskets, and especially the correct fuel valve. The fuel valve used for the 938 series carburetors was part number 25-190S with an orifice of 0.076 inch. The more common YF (used on Chevrolet and Ford) used orifices from 0.093 to 0.101 inch. Do the math with the equation for area on these and you can understand why many experience flooding problems. The YF as used on the Jeep will take 5-1/2 pounds pressure if the proper fuel valve is used. Many repair kits of today have too large an orifice. The larger orifice requires more buoyancy from the float (at idle), resulting in flooding and the need for a fuel pressure regulator.

Also, the correct fuel valve for the 938 series was spring-loaded. This fuel valve was developed by Carter for use on 'rough service' carburetors (off-road and marine). Its function was to smooth the jolting of the float, maintaining a more constant fuel level in the bowl, and minimizing damage to the float. If the Jeep is used only on the streets and highways, the replacement solid valve will suffice; however off-road Jeeps should use the spring-loaded fuel valve.

At The Carburetor Shop we make a superior repair kit which does contain the spring-loaded fuel valve (for carburetors where it was specified by Carter), as well as many other parts not in the parts store kits. We also make kits for the W-O, and YS Jeep carburetors. Check out our website. Should other carburetor questions arise (1974 and earlier only), please telephone and we will try to answer them."

While the YF is pretty much indestructible, it will wear over time. Throttle shaft to throttle body would have originally been 0.004 to 0.006 inch. Normal wear up to about 0.009 is acceptable. Wear of 0.010 or more is going to start showing up as poor idle quality. As the clearance of throttle body to throttle shaft increases, unmetered air will enter the intake manifold, causing a lean idle. Tuners will compensate for this lean condition by increasing the idle mixture. This in turn, can cause a hesitation or bog in transition from the idle to the main metering circuit. We are often asked about bushing kits, but we are hesitant to sell them. If it is determined (use a dial indicator) that throttle bushings are to be installed they MUST be correctly installed. One may NOT use a reamer (or drill) and ream completely through the throttle body and then install bushings, as this will create an internal vacuum leak resulting in a higher than normal idle (not adjustable). Visualize looking down the air intake of the carburetor. You see a round throttle bore. If bushings are installed with the use of a reamer, the square edge of the end of the bushing will leave two small triangles on each side of the throttle plate that allows a small amount of air to slide by the throttle plate. This is unacceptable. 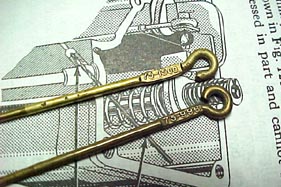 The weakest area of the YF would be adapting to engine modifications. It is not impossible, but as Carter did not offer the YF as an aftermarket performance unit, no instructions were printed to aid those changing camshafts, headers, etc. If one adds headers, it will probably be necessary to change the metering rod. If one changes the camshaft to one that has significantly less vacuum, some of the springs will probably need changing (these may require hand winding).

All in all, the YF is an excellent carburetor that can be rebuilt successfully time and again. Maintenance of the YF is very simple. For those who drive their vehicle regularly, simply change the air and fuel filters at the recommended intervals, and about every 150,000 miles, rebuild the carburetor. For those who drive less frequently, consider either driving more frequently, or hire a responsible 15-year-old to start the vehicle at least once a week, warm the engine, and move the vehicle at least the distance of the diameter of one tire. Absolutely the least expensive preventative maintenance available. This is true for any vehicle with any carburetor. -- Jon Hardgrove

Bruce Osborn has a less enthusiastic view of the YF, and supplied this troubleshooting guide a few years ago, for anyone trying to improve the performance of the carb on their CJ-3B:

"Ahhh, the wretched YF. A decidely unspectacular carb. Luckily, it was attached to my F-head, and left my Jeep forever when I dropped in a V6. I had the nickname of 'carburetor boy' because I was always trying to get that damn thing to run right. It's been a while, but this is what I remember about the YF.

"Usually, none of these things help, but they are cheap. I always start with the cheap fixes first.

"What you'll really end up doing: "I usually count on spending two weeks cursing carbs after I mess with them. The YF was the worst carb I ever had to mess with...

Recently on the CJ-3B Bulletin Board there were some questions and suggestions relating to the procedure for rebuilding the carb.

Tony Morreale: "I just got a carb overhaul kit from Turner 4WD for my 3A and was wondering if anyone out there (2A, 3A or 3B) had gone this route in trying to pep things up a bit (my Jeep takes a while to warm up and is apparently leaking at the bottom gasket of the carb). Also, do I need to drain all the fuel from the tank before removing the carb? Is there pressure in the fuel line when not in use? If I just remove the in-line filter and take out the carb, is my garage going to be flooded with gas? Should I just get a whole new unit from Whitney or someone and forget trying the overhaul? The kit was less than $20."

Eric Lawson: "Remove the gas cap and then pull the carb. There isn't any pressure in the fuel line to the carb when the engine is off and this point in the fuel system is well above the fuel in the tank, so you won't have any gas pouring out onto the floor."Even so, there is likely to be some gas spilled from the carb. Because of this, I always do fuel system work with the Jeep pulled out of the garage. It doesn't take much gas to build up quite a bit of fumes in a closed up garage and it doesn't take much to ignite gas fumes."

jyotin: "You'll always spill some gasoline when working on this stuff. Moving it out of the garage is a good idea. If it makes you feel any better you can disconnect the battery."

Vern: "I recently overhauled a Carter model W-O carb. I have a repro factory manual which was very helpful, especially for setting the metering rod and accelerator pump linkage. I am thrilled with the results. The only problem I ran into was with some of the flat washer-type gaskets. The inside diameter was just a hair too tight to fit over the various plugs. I had to carefully enlarge them and everything was then fine.

"I have also heard these Carter carbs are prone to flooding from too high fuel pressure at the inlet. I haven't had this problem, but many people have added an in-line fuel pressure regulator. I think they are only about $20 at NAPA.

"Somebody also had some great advice for me. He said to make sure you set aside enough time to be able to work straight through if possible. If you tear it all down and then can't get back to it for a few days it is very easy to forget how to reassemble it. I'd definitely agree with that."

Mike: "On my original '62 CJ-3B, under the bowl I see some vertical lever or linkage. Gas is leaking out of it while it's running. What do you think? Bowl sticking? I guess I'll have to take it apart."

Steve: "The upright lever you describe is the accelerator pump rod. It forces fuel out of the bowl into the orifice in the venturi when you press the accelerator. My guess is that the float in the bowl is either sticking, or is set too high; this is causing fuel to constantly pump into the bowl. The Jeep is also probably running really rich.

"Failing this, I'd put a carb kit into it, and set the float per the instructions. This is a LOT cheaper than going the Solex route, although the Solexes start and run better than most 40-year-old Carters do...."

Thanks to Bruce Osborn and Jon Hardgrove for their tips, and to Ed Wilson for editing the comments from the Bulletin Board. -- Derek Redmond

Elsewhere on the web, see The Carburetor Shop and Old Jeep Carbs LLC.