Luis Mariano Paz found this maintenance-free reproduction of an Autolite S24F 12-volt battery, which may be the best current repro of the original equipment 12-volt battery in a 1960s Jeep. It's available from sources including Virginia Classic Mustang and Restoration Battery and Battery Central Mall. 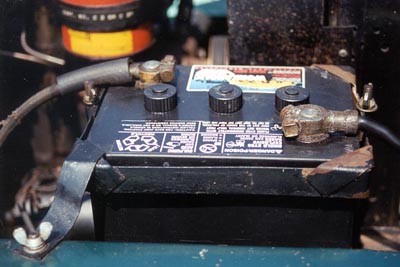 Ed Wilson: "One of the best things I have done for starting and charging was to move the battery ground from the body to the engine proper. This showed a marked improvement in both as the aging sheet metal will cause a lot of resistance in the system. I suggest this if you have not already. Also, be sure you have battery cables for the 6-volt (the heavy ones) as the smaller cables do not handle the full potential of the battery and have same effect as a weak battery.

"I usually pull a full visual inspection of the electrical system and clean both ends of both battery cables and their connections about this time every year. In running a 6-volt system for the last 30 years, good maintenance means good starting."

Lawrence Wade mentioned the corrosion prevention strategy used on his battery, seen here in a photo by Rus Curtis: "Notice the industrial felt washers that are placed over each battery post. Dad started this fad so far back I do not remember when. The felt washers are saturated with light weight oil. Do you notice any corrosion? The battery connectors are very clean, being 52 years old. The only maintenance on the battery end connections I have completed in the past years is just to add a little oil to the felt washer periodically. I do wipe the top of the battery to keep it clean and dry. I also use this application on my outboard motor battery."

Peirce Eichelberger asked: "Is there any downside to larger wire? I discovered that the bigger battery cables made a heck of a difference on the starting power of a 6-volt 1958 CJ-3B. The starter cranks faster and the F-head cranks up faster. My horn always sounded kind of anemic, so I tried a larger gauge wire for the plus side to the horn, wow sounds like a real Jeep horn! The ground side works through the horn button and steering tube just like Toledo intended. Prior to inspection this year I will rewire the power lead from the solenoid to the ignition switch with a larger gauge wire and hence on to the horn. The Jeep technical manuals don't seem to say much about wire gauges, or am I missing something?"

Jyotin responded: "No downside to larger gauge wire. It can get a little bulky, however."

Larry agreed: "You're right on the money here. In fact, I make up cables for all my vintage Jeeps, trucks and tractors using 0 and 1/0 gauge welding cable with heavy copper lugs soldered on the ends, (if one wants the cable ends looking nice, simply slip a short length of heat shrink tubing over the cable before attaching the terminal lugs, slip the tubing up after completing the soldering, apply heat and, 'voila', one has a great almost factory looking set of cables). Ask any electrician or fire investigator and their response will be the heavier the wire the less heat build-up and the more load carried." 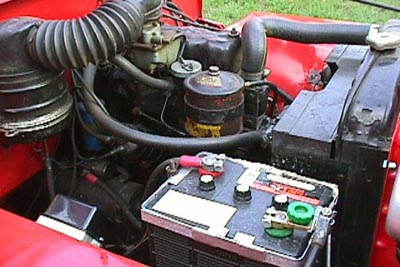 Jon Paulsen suggested: "You really should run a wire from the battery to the frame or body, in addition to the heavy ground you run to the block. The frame/body ground does not need to be nearly as big as the one that goes to the engine. The purpose is to prevent current flow thru the engine, transmission, and T-case, which can reduce the life of bearings and such by elecrolysis and arcing. Probably about 1/10th the size of the real ground is adequate."

Wiring the Starter and Solenoid

John asked on the bulletin board: "I have a 1953 CJ-3B and must have the starter wiring messed up. I have a key switch and bypassed the floor starter button. The solenoid on the firewall has no wires attached to it. The plug and coil wires are there and in place, but the rest of the wiring isn't done yet. Also, the coil and generator are 12-volt. Now, what wires go where? There are 3 wires from the generator to the voltage regulator. How can I start the Jeep just to hear it run?"

This diagram isolates the starting circuit from a pre-1957 CJ-3B, as seen in the Early Wiring Diagram (40K GIF) from the 1956 Parts List.

To help follow the discussion below, see the complete post-1957 Late Wiring Diagram (420K JPEG) from the 1965 Service Manual, including the ignition key, solenoid, coil and voltage regulator.

Ken inquired: "Is there any way to tell if the coil has a resistor or if you need to add one?"

Jyotin added: "The F-134 did not call out a separate ballast resistor for the coil circuit, therefore it is not an issue. Didn't have one, shouldn't need one. What will burn out the points is a missing or bad condenser."

Jimmy answered: "The coil will often say on it if it's internal resistor and no ballast resistor required."

Jyotin continued: "It may be different for other engines, but there is no part number for a ballast resistor or resistive wire in the F-134. A six-volt coil (p/n 649712) is not the same as a twelve-volt coil (p/n 933160). Condenser and points (p/n 917128 and 923146, respectively) are common between six and twelve-volt systems. Put the correct coil in, wire it up and don't worry about a ballast resistor or wire."

Oldtime interjected: "The ignition coils used with the 12-volt systems are specially designed 6-volt coils which operate with a resistor connected in series with the primary ignition circuit. The purpose of the resistor is to prolong the life of the distributor breaker points. The resistor is either internal or may be external. The original F-134 coils would be calibrated for a set ohms range. This must also be within the condensor's range of capacitance."

John H later added: "This is all true, however, this is not the end of the story. On later 12-volt systems, the 6-volt coil is used with the external resistor as Oldtime points out. However, the coil is also wired on the primary starter circuit between the key switch and the solenoid. This temporarily bypasses the resistor while the starter is engaged, sending 12 volts directly to the coil, which in turn, produces a hotter spark while starting the engine. Once started, key is returned to the ON position, and the resistor is once again utilized protecting the points. If a coil is wired without an external resistor, the advantage of a hotter spark when starting is lost."

John concluded: "First off I bought a new coil, one that doesn't need a resistor, and put it on. Second, followed your overall instructions concerning starting with the jumper cable to the starter and she kicked right over."

Thanks to Rus Curtis and Steve Perialas for the photos. -- Derek Redmond