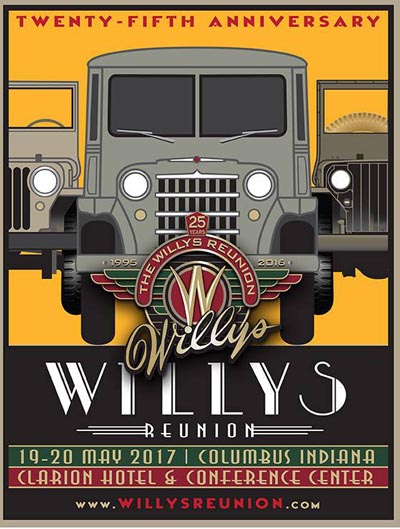 The 25th Anniversary Spring Willys Reunion was held on 19-20 May in Columbus, Indiana. It was a rainy weekend off and on, but there was a good turnout including quite a few people at their first Willys Reunion.

And the big news is that there were six CJ-3Bs on hand -- the most high hoods ever assembled at a Willys Reunion. Unfortunately, nobody got a picture of them all together, but I've got them all here for you, one by one. Thanks to Bob Christy for the photos. 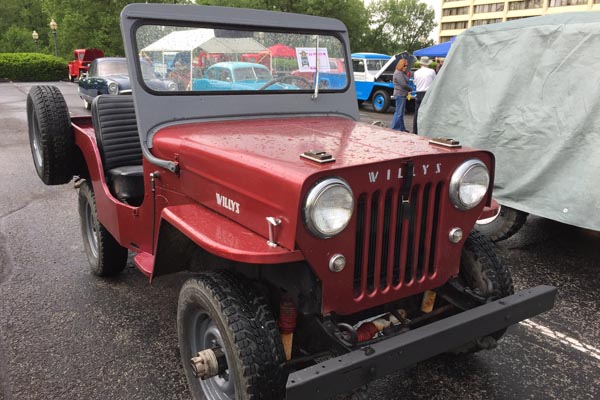 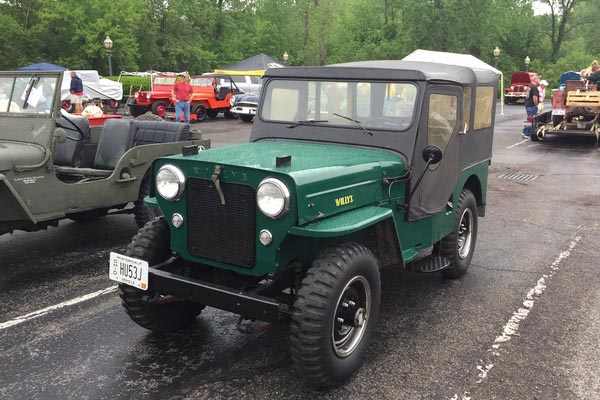 Dave Streithorst from Ohio has flown the high hood flag at quite a few Reunions. 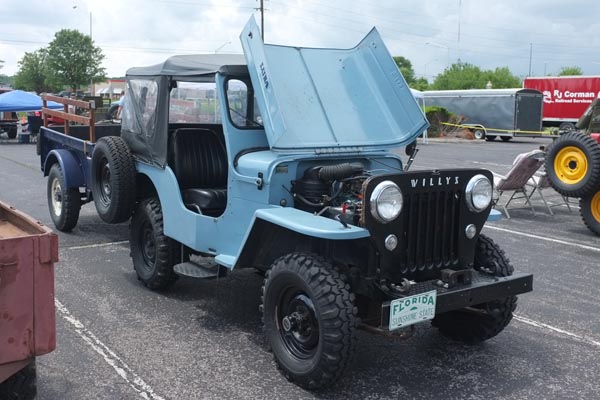 William Barrow drove his blue '54 and Bantam trailer all the way up from Florida. 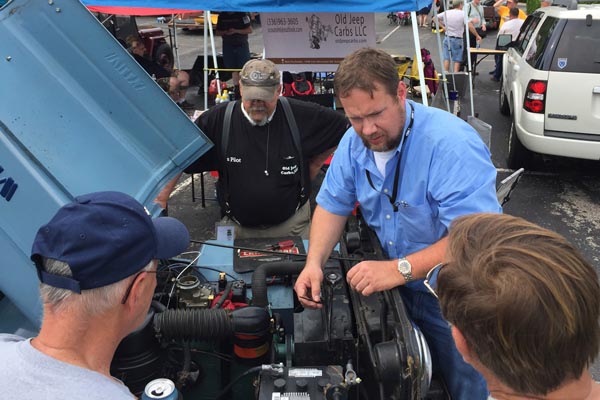 A bit of carb surgery for William's F-head. 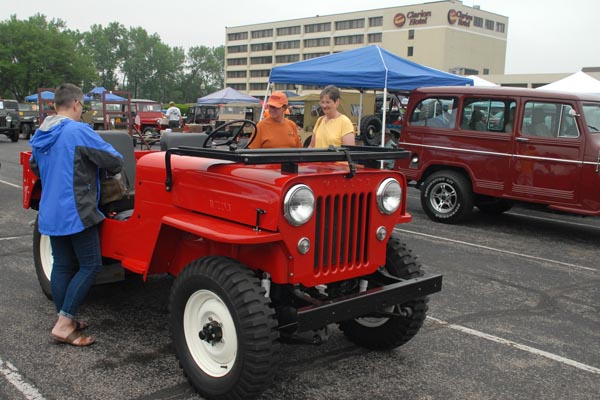 This '53 recently repainted in President Red belongs to Jay Henderson. That looks like Eric Dunlop's station wagon in the background, and behind that is the Clarion Hotel, which people felt was a great venue for the event. 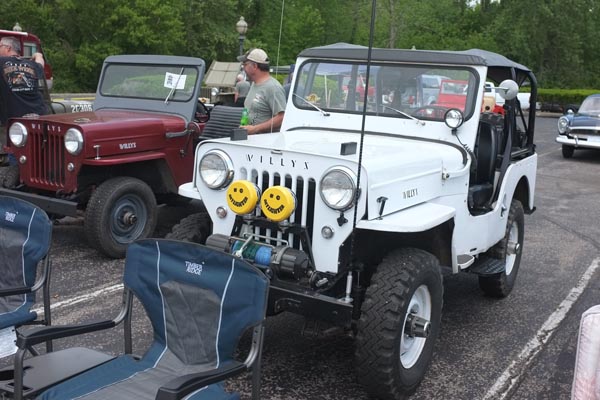 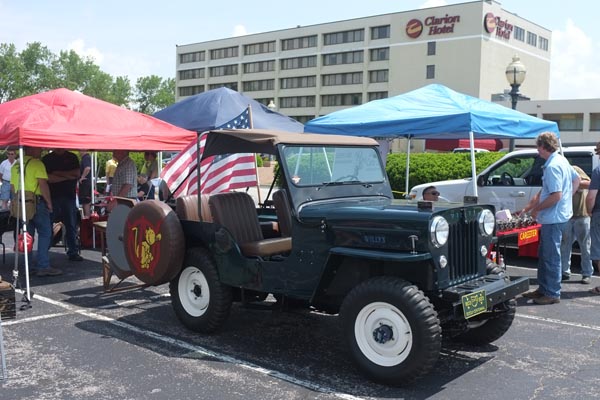 The only time the sun came out all weekend was apparently when Bob Christy was ready to take a picture of his own Jeep. 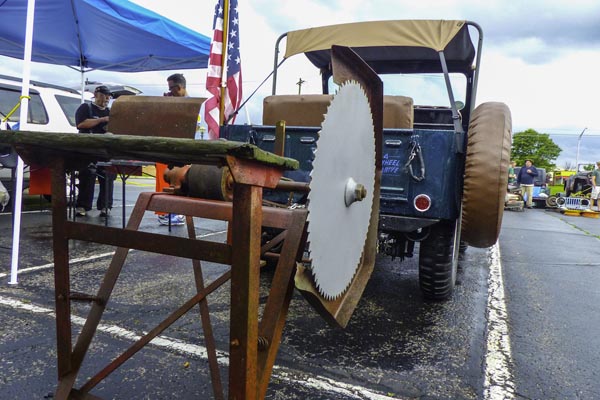 Bob has a very scary new accessory on the back of his '53. 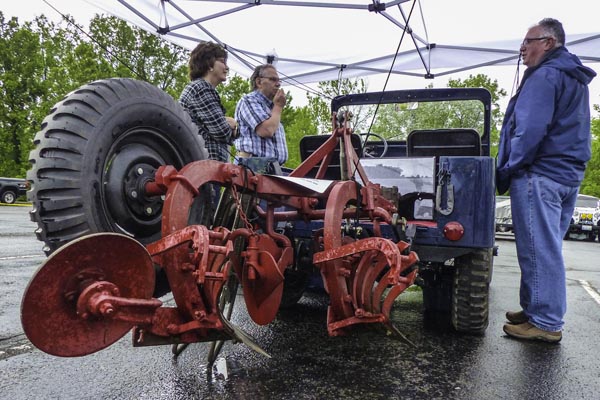 Another Jeep with an implement lift was Barry Thomas' 1949 CJ-3A, "Ole Blue." 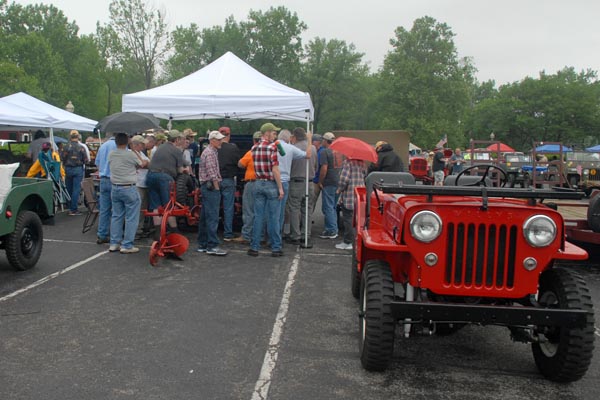 On Saturday morning a crowd gathered for Barry's presentation on the history of three point lifts. 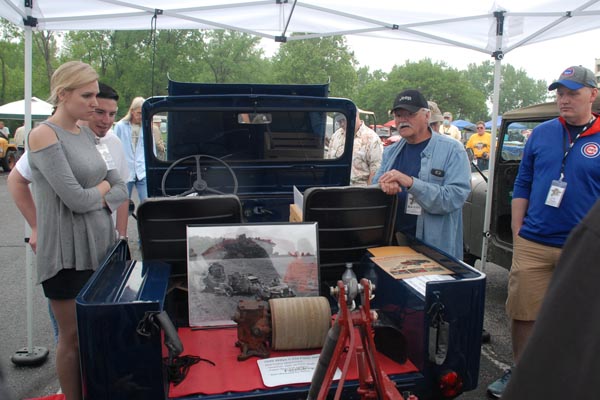 Barry is a local Indiana boy, and well known as part of the FarmJeep.com team. 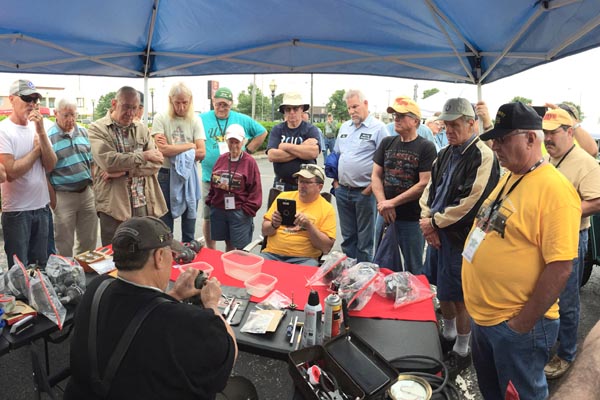 Later on Saturday, the congregation of the Church of the Carburetor assembled for a carb rebuilding clinic by Rick "Scoutpilot" Pacholski of Old Jeep Carbs. 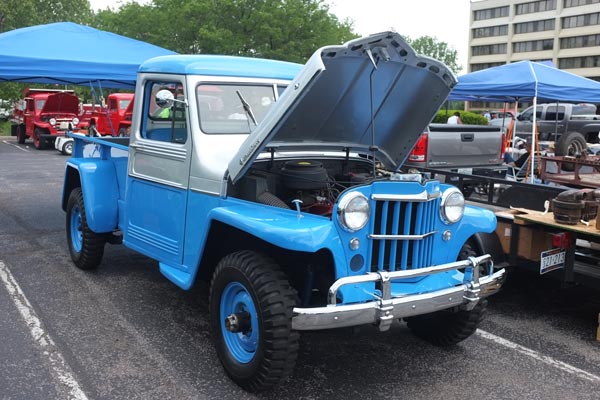 There were a bunch of sharp pickups on hand this year. 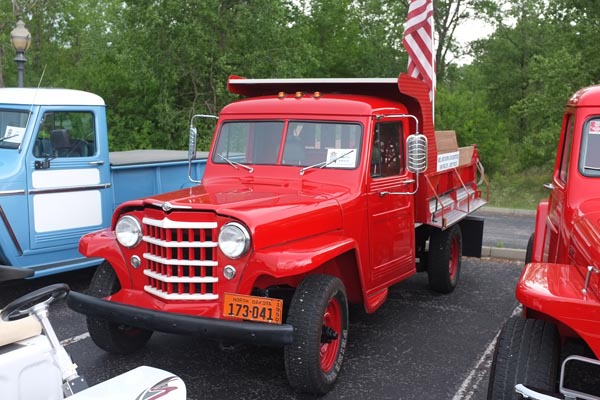 This lovely truck is owned by Mel and Donna Hochstetler from Indiana, and used to belong to Mel's father in North Dakota. It's a 1950 -- the first year with the new grille. 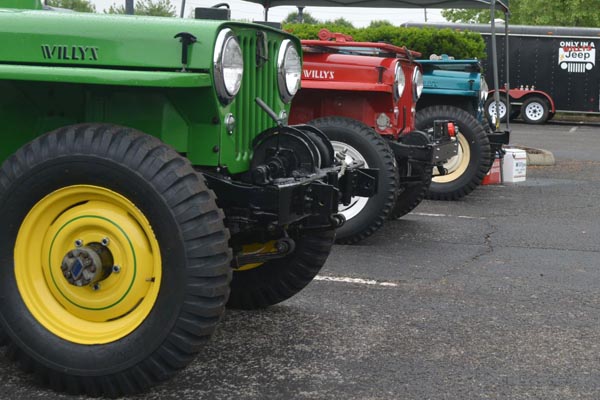 Of course there were quite a few nice CJ-2As in attendance. 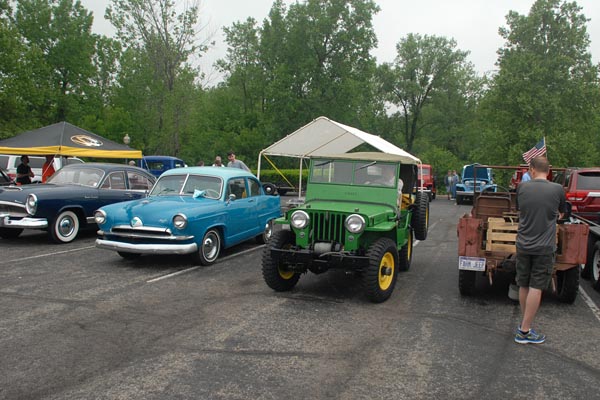 Also a few Kaiser automobiles, including this blue Henry J. And parked beside it was something you don't see every day... 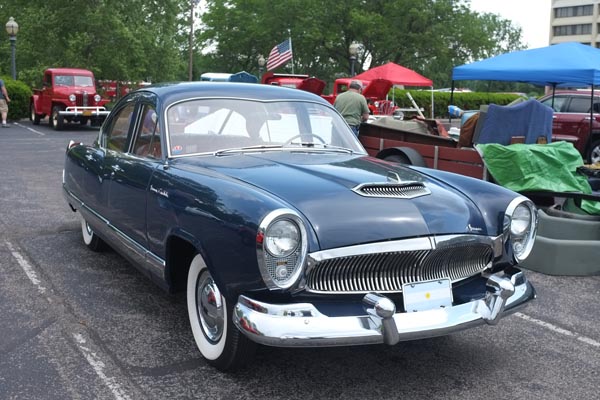 ...a Kaiser Carabela from Industrias Kaiser Argentina. The Argentinian version of the Kaiser Manhattan was produced from 1958 to 1962, long after Kaiser had given up building cars in the US. This 1960 Carabela belongs to Jerry Johnson from Illinois. 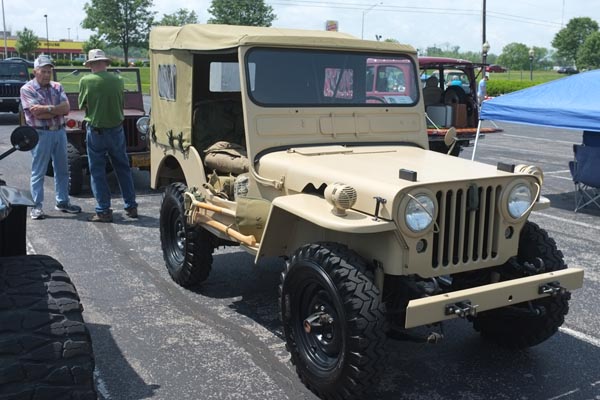 Chris Gladstone brought his M38 from Kentucky. It's actually partly CJ-2A, and looks very cool painted in Desert Tan. John Ittel seems to like it! 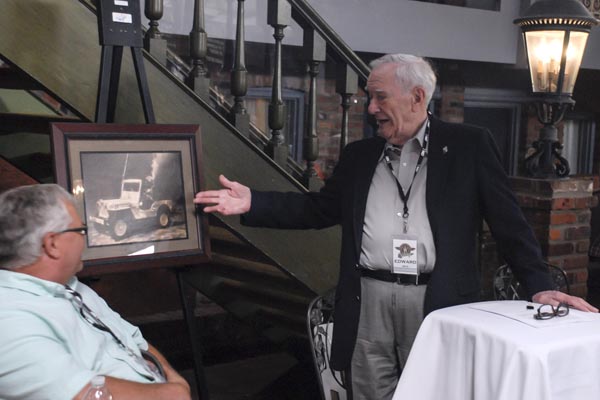 Speaking of M38s, special guest speaker Edward Bick, who worked for Willys-Overland from 1946-1956, was involved in the famous demonstration of an M38 underwater (90K JPEG) in 1951. 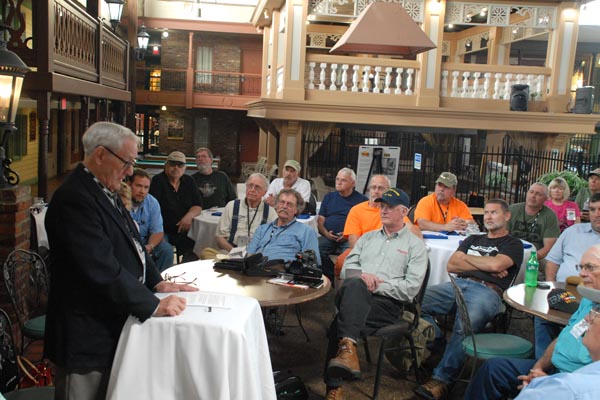 Jim Allen and Keith Buckley were front and center to listen to Edward's talk. 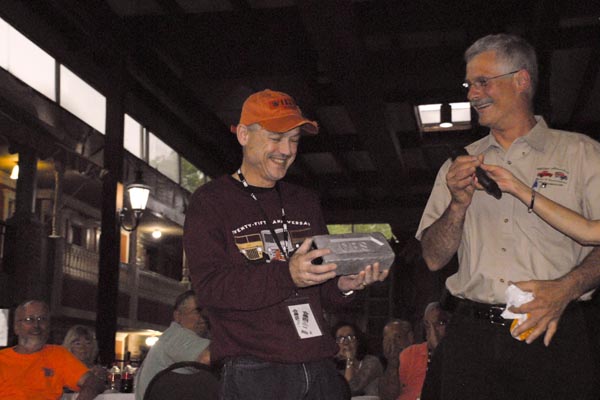 At the Saturday banquet, there was a bit of a twist on the traditional "Toledo Brick" award, as Paul Barry presented Spring Reunion founder Dennis Caraway with a silver 25th Anniversary brick. Paul also spoke about the history of the Reunion. 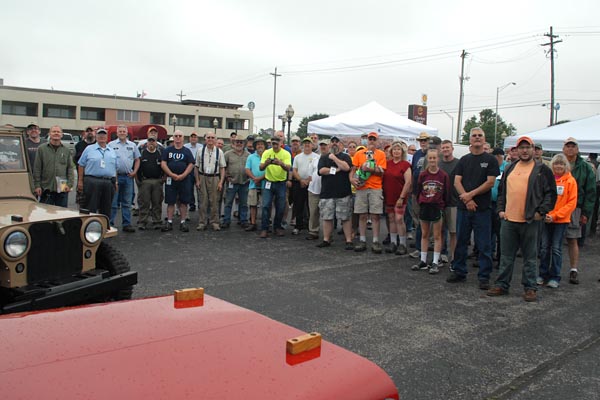 Everybody lined up for a group photo, and it looks like they were all checking to see when the rain was going to start. But they were actually looking at Jeff Petrowich's camera drone. 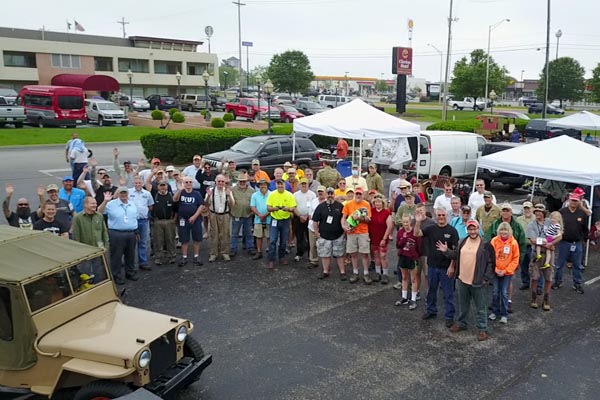 Here's Jeff's shot. I see Ian Fraser there -- one of these years he'll have his CJ-3B finished and he'll bring it in his checked baggage! 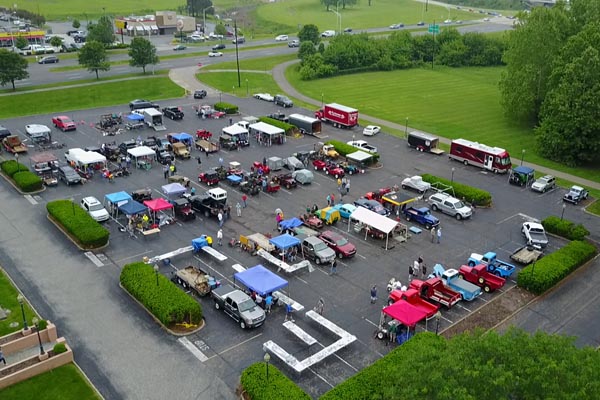 Jeff also got a great shot of the whole parking lot. CJ3B.info has been covering the Reunion since 2002, and this is the first time we've had an aerial view.


Thanks to Bob Christy and Jeff Petrowich for the photos. -- Derek Redmond