Once again this year, the beautiful people and the beautiful Jeeps gathered in the spring, at the 17th annual Spring Midwest Willys Reunion. There were actually two Spring Reunions this year; the first gathering in Mason, Ohio at the famous King's Island Resort on 15-17 May had the 1961-67 luxury version of the CJ-5 and CJ-6 known as the Tuxedo Park as the featured vehicle. 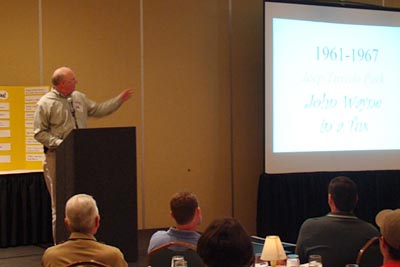 Speaker at the Saturday evening banquet was noted Jeep author Jim Allen, who had just finished revising his Four-Wheeler's Bible for a Second Edition (see The CJ-3B Bookshelf.) Jim titled his presentation on the CJ-5A "John Wayne in a Tux." 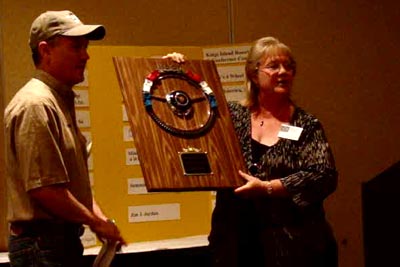 The banquet also featured presentations thanking people for their contributions to the Willys cause, including a lifetime achievement award to Spring Reunion founder Dennis Caraway. 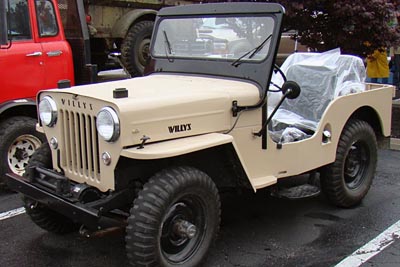 There were some CJ-3Bs in attendance which haven't appeared before on CJ3B.info. Dan Walton's US Army Jeep below is a '64, from West Virginia.

And two more Jeeps that CJ3B.info readers will enjoy were a CJ-3A with front-end loader and rear-lift plow, and an M715 fire truck conversion.

A second chance Reunion was held two weeks later in Farmington, Minnesota on 29-31 May, with the featured vehicle being the column-shift CJ-2A. The gathering was held in conjunction with another national event known as "Mopars in the Park."

For more details on this and past Reunions, see the Spring Willys Reunion website.

Thanks to Art Contoni and Kevin Banonis for this year's photos. See also more photos from the annual Spring Willys Reunions on CJ3B.info. -- Derek Redmond