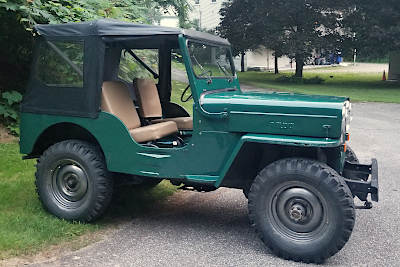 Larry wrote from Winsted, Connecticut in early 2022 to say, "Bill McCarthy and I bought this off a guy in Litchfield CT who used it on his farm property to plow and tow trailers. We have done a bunch of repairs to make it safe to drive on the street, including the clutch linkage, brake master cylinder and a complete wiring of the blinkers and brakes. We also put a bunch of wiring back to stock to get the generator to charge since it was disconnected for the plow. The horn didn't work and the foot starter switch was faulty. We ordered a complete OEM suspension kit but currently the greasable shackles are on back order." 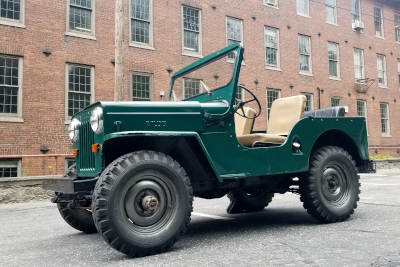 "It has a Hurricane engine but I was told it is not the original engine. The engine number is T50819 -- any idea how to decode it? We replaced the exhaust manifold since the part where it meets the pipe was rusted very badly. We also have the original-style front blinkers which still need to be put on, but for the time being we used trailer blinkers. We drive it in the nicer weather and are waiting to try any offroad adventures until the suspension is complete. We enjoy it very much and everybody is in love with it everywhere we go -- at 55 mph downhill."

See the family in the Jeep at a Naugatuck Railroad crossing in Torrington CT, in CJ3B.info's May 2022 cover photo (120K JPEG). 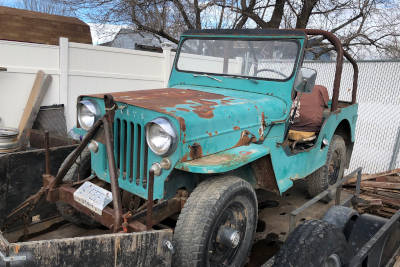 Larson is in West Point, Utah, and has a Jeep that his father bought in the 1980s. He says, "My dad had it until he passed away in March 2021 and I took it to keep it in the family. I have had many memories growing up in that thing. I remember driving it to high school, hunting, running it in mud bogs, and all kinds of things. I remember hanging out the side of it more than a small handful of times to keep it upright going places nothing else could fit." 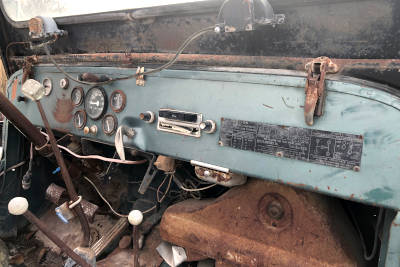 "When we got it, it had some kind of hard top and doors on it. I don't know where that ended up. My dad put a seat from an old school bus on the back of it for kids to ride. I would sit in that seat on the back and lean across the hard top with my rifle watching for deer. I remember another time when the seat wasn't on there, sitting in the back with a couple of my cousins (teenagers), chasing deer across a valley at a faster speed than should have been acceptable, with a chain saw bouncing around all over. It was a crazy ride down that hill!" 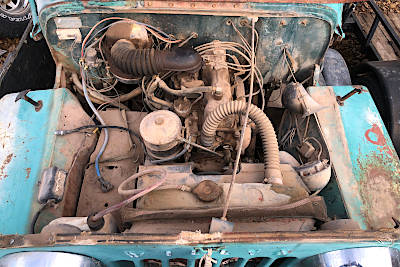 "I don't know how far I am going to take it. I have a 2022 Rubicon Diesel. Part of me wants to clean it up and paint it to match, but at the same time, I might just get it running good again and drive it for fun. Make it into my side by side and have some fun in the mountains with it." 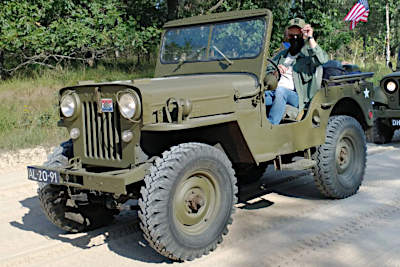 Herman in the Netherlands sent this photo in 2021. "This is a picture of our Jeep CJ-3B, serial number 454GB2 16498, during a ride with other historical military vehicles. We became the owner of the Jeep in 2019 and have already enjoyed it a lot. What we have learned so far is that this Jeep served in the Swiss army. The previous owner painted it olive green; below that is a much darker color." 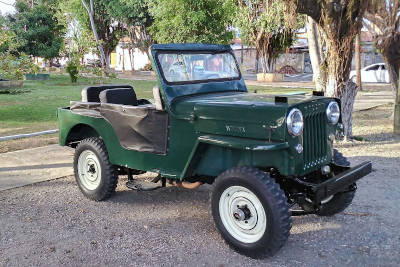 Moacir Pedrosa in Alagoas, Brazil, says, "I am the third owner and over time a lot has been done to it. The previous owner replaced the original engine with a newer OHC engine produced by Ford and used by them in the CJ-5 after they bought Willys Overland do Brasil and built Jeeps until 1983. It is powered by ethanol, and there is a four-speed transmission."

See more photos and details of this Ethanol Powered 1954 CJ-3B. 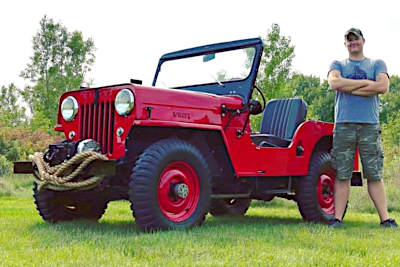 Robert in Michigan says, "This CJ spent its working life in Texas on a farm. I purchased it in April 2020 and went full steam ahead. Tore her down and rebuilt all her components. I have never been more proud of something I restored, and a CJ-3B has been my dream Jeep since I was a little kid. Thirty-two years later I made it happen and she's a dream come true!" 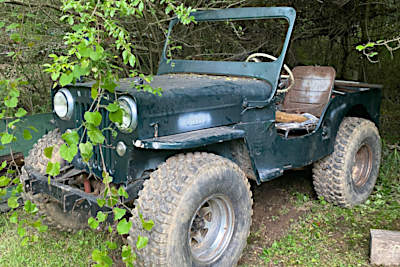 Ronnie in Tuscaloosa, Alabama wrote in 2020, "I have recently acquired a 1954 Willys CJ-3B. I don't have any history on it, but there is a plate attached to the tailgate that says 'Hidden Hill Ranch.'

"Those big Dunlops are gone now. They were just there to get it off the ground. It was saved from a scrap yard. The wheels had been removed. I'm trying to put it back as close to original as I can. I'm unsure why it was scrapped; the tub has a very small amount of rust, the engine has been rebuilt and has a new wiring harness front to rear. After locating a starter and putting a new 6-volt battery in it, it runs great! I have rebuilt the trans and transfer case now because the synchronizer broke and locked the trans up. Can't wait to get it back in." 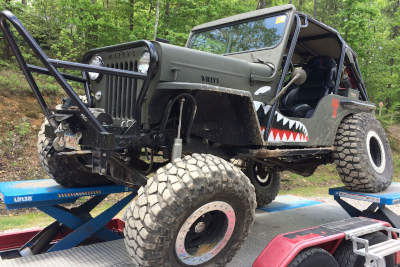 Michael in Fort Smith, Arkansas, told me in early 2019, "I purchased this Jeep as an unfinished project and set out to make it a good performing Willys. It works and performs great, and gets used -- it's seen a fair bit of action."

See more details and photos, and the original 1954 sales invoice, of this Long-Wheelbase Build. 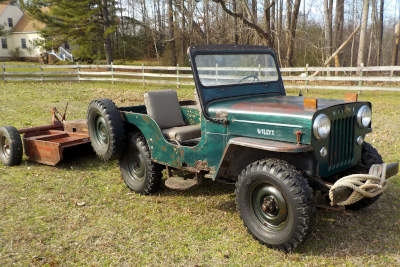 Walker Gaulding in Warsaw, Virginia, comes from a Jeep family and couldn't resist the chance to rescue and restore this abandoned CJ-3B and "Mow Hawk" bush hog. He decided to finish it with a clear coat over the existing patina, and he tells the whole story in Dad's Footsteps. 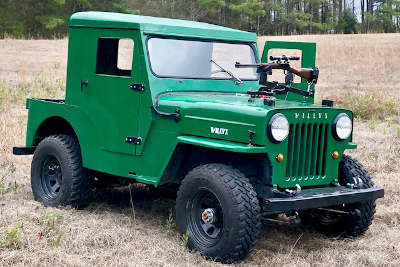 Gary wrote in early 2020, "I was riding and saw it on the side of the road with a sign that said make an offer. I did and bought it. It belonged to a county sheriff's grandfather here in Mississippi. I rebuilt engine, brakes, new paint (emerald green) and pretty much all else. Has Warn lockout hubs. I have wanted one since I was a kid. I use it for trail rides and hunting. I have also taken it to a few car shows. It's just a pleasure to drive."

Last updated 1 May 2022 by Derek Redmond redmond@cj3b.info
https://cj3b.info/Photos54Part5.html
All content not credited and previously copyright, is copyright Derek Redmond