Hurricane on the Trails

Doug and Jodie Wilson go trail riding as often as they can, in their solidly built-up 1954 Jeep, still powered by the original F-head Hurricane (with 36,000 miles on it). From 1991-2001 they've taken it to 20 Jeep Jamborees, 3 Willys Runs, and countless other club events. 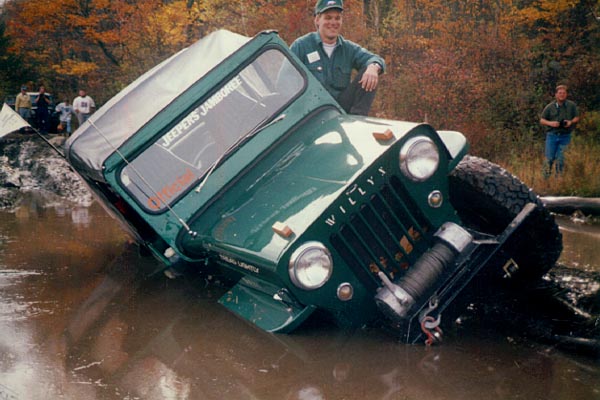 Oops! It's not fair to put this picture at the top of the page, but it's such a classic, how could we resist? This 1994 photo was taken on the Old Florida Trail in Massachusetts. It would have been a natural for one of our "Unusual Photos" pages, but there are so many good pictures of Doug and Jodie on the trails of New England, we wanted to put together this whole page just on their Jeep. 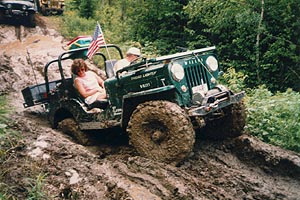 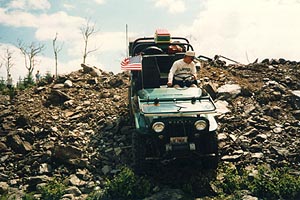 In another photo from the July 4, 1998 outing, Doug eases the Jeep down a rocky slope. His Maine licence plate says it all. (If you can't read it, see the larger copy of the photo, 75K JPEG.)

As Joel Haslett says, "It is interesting to see Doug work his 3B on the trail. If you stand near an obstacle, you'll see CJ-7s and such go through at full throttle with mud flying, and sometimes not make it through without a tow. Then Doug will chug through smiling, idling in low gear with out any fuss." 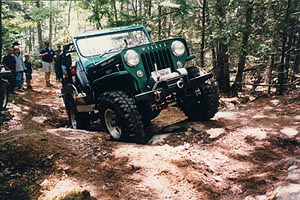 The Super Swampers work fine in the rocks as well as the mud. Clearance is provided by a 3-inch lift, and security is provided by an 8000 lb. Ramsey winch with dual controls. The Jeep also has front and rear PTO.

This picture was taken in 1999 on the Mid Coast Ride in Warren, Maine.

See also another photo of what Jeeping is all about -- the Wilsons pause to take in the scenery during a late fall drive in the woods (100K JPEG).

Thanks to Doug and Jodie for the photos. -- Derek Redmond

See also their photo of the Jeep lined up with four other 3B's at the 1999 Willys Run.

Last updated 28 May 2004 by Derek Redmond redmond@cj3b.info
https://cj3b.info/Owners/WilsonDoug.html
All content not credited and previously copyright, is copyright Derek Redmond