Three Willys Jeeps
and 2,500 Miles In Between

Sebastian is the only person I know who owns a CJ-3B on two continents. Here's the full story of how he discovered the fun of owning a Willys. Twice. -- Derek Redmond 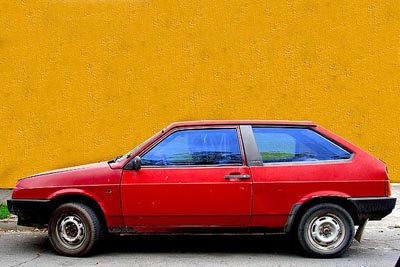 It all started because of an old Lada Samara in Colombia in 1994. As far back as I remember, I always loved cars, and a few months before turning 16 my dad told me he was going to give me a Lada Samara that was available. I did not think much of the car, but a car is a car, especially your first one. But the plan changed and my dad started talking about restoring a Willys CJ-3B together instead. When he was younger he had one and loved it, but as his life changed he replaced it with a newer car. He never forgot about that Willys and maybe now was the time to get another 3B. When he told me the new plan I was not even sure what a 3B was, but I had no complaints. Anything has to be better than the Lada, I thought. 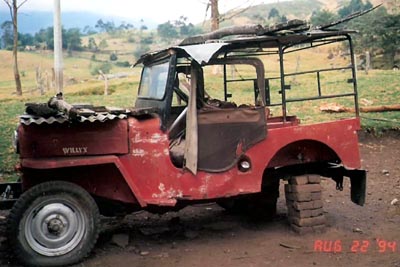 And the adventure began: we got a 1954 CJ-3B basket case near Bogota, and ended up only keeping the steering wheel and the registration. We really had no idea what we were getting into. My dreams of having my own car and all that it represents were vanishing. Despite having professional help, the 3B was taking too long to put together, and I even started to think the old Lada Samara was maybe not that bad after all. 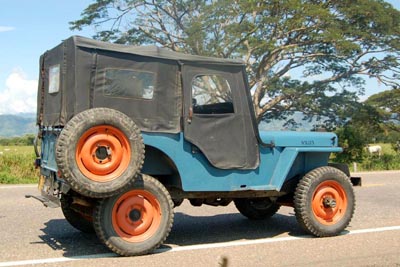 At the same time, my dad was rediscovering his love for the old Willys, and one day while visiting a Willys mechanic who was helping us with the engine, he could not resist buying a blue 1950 CJ-3A that was in good shape but not restored. My first thought was that my 3B project was lost, but little did I know the 3A was going to change my life. I will never forget that Sunday when my dad took me in his 3A and let me drive it. It was my first time driving a Willys, and I will always remember the 3 forward gears, the soft top, the removable doors, the seats, the gasoline smell, the big steering wheel. Thinking I would own one like that soon was all I needed! 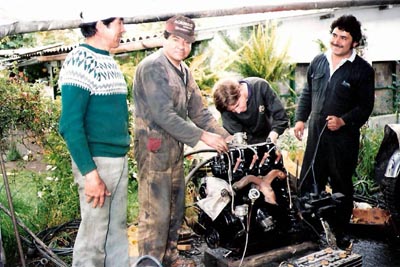 It took us almost a year and the professional help of a really good friend called Jaime Tobar, to finish my red 1954 3B. I am very happy I found this picture with Lucho, Silvano, me and Jaime -- these 3 guys were the best help in the world in 1994.Finding all these pictures has been an emotional ride. I have not seen a picture of Silvano for a long time -- he passed away years ago. 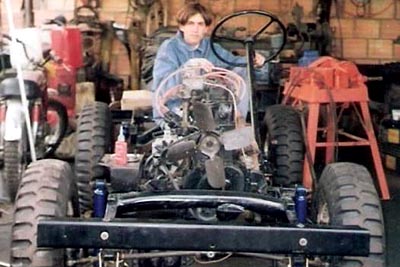 There were many upsets in the process, such as waiting forever for the body parts to arrive, as they were hand-produced in a small town close to Pereira in the coffee growing region of Colombia. I even kept different parts in my room, dreaming of getting the car ready. Friends such as Mauricio Yanguas helped us with many aspects of the process, and finding the right parts. 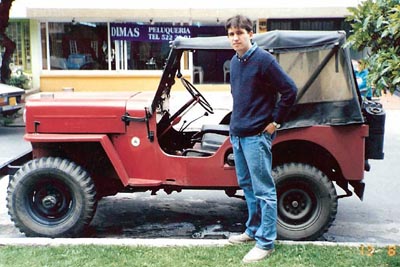 Finally after all the effort, the car was ready in July of 1995. That was my junior year of high school, and the car meant the world to me -- it was all I had been dreaming of for a year, and much more. I used to take it everywhere, daily drives in Bogota, weekends on unpaved roads, etc. It gave me independence and everything I wanted as a teenager, despite the fact it used to break down often, thanks to a faulty/dirty gas tank. 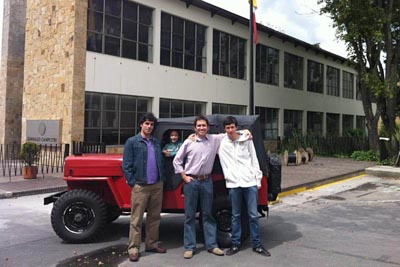 Everyone in my school used to love the Willys. At some point we got a photo with almost 20 guys climbing on it. No idea where that picture ended up, but this is a picture back at the same high school 16 years later, with Nicolas Hernandez my co-pilot during those years, my cousin Alejandro who now was a student at the school, and my nephews Tomas and Mateo. 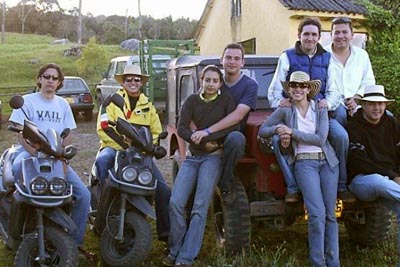 College followed, still with the same red 3B -- it served for all the adventures college years brought. Many trips in Colombia, all kind of terrain, day and night, endless memories. My dad and I also continued to take his 3A for trips around the country. We went to the coffee growing region and even climbed as high as you can on the Nevado del Ruiz volcano, where a photo with my friend Nicolas (30K JPEG) was taken.

This picture of many of my friends is the first one of me and my girlfriend Ana with the red Jeep, in 2005, before we were married. 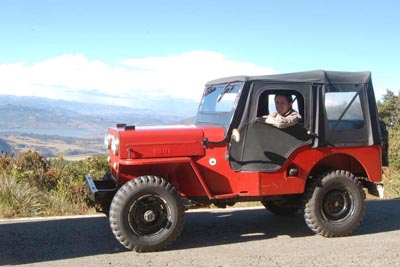 After finishing college, I had the opportunity of coming to the U.S. for graduate study. Many of my friends offered to buy the Willys but there were too many memories surrounding the red 3B -- I could not just sell it. The price of a Willys Jeep was not that high anyway; it was not seen as a classic or an antique car. So I decided to keep the music playing and try to maintain it even living outside Colombia. For the last 13 years my family and friends have helped me to keep it going, and every time I visit it is a new opportunity to continue making memories (120K JPEG). The feeling of driving the red 3B is very special to me. 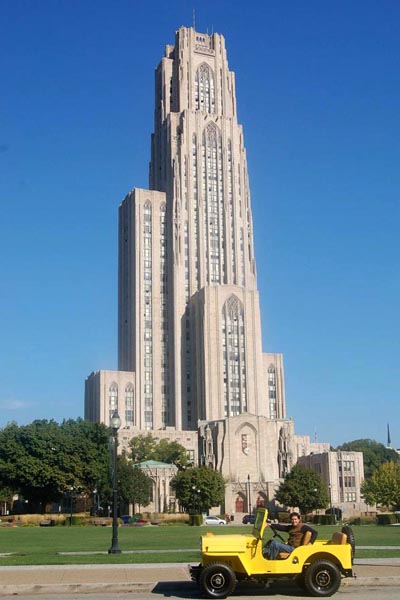 I came to the University of Pittsburgh in 2001 to pursue a PhD in Geotechnical Engineering. During my first years in Pittsburgh I never saw a Willys Jeep -- I thought that in the U.S. they were extinct. But this was about the time I learned about CJ3B.info. Until that point I just knew the basic history of these Jeeps but not really the impact they had everywhere else in the world, and the fact that Colombia was not the only place where they survived. CJ3B.info educated me regarding the history of the 3B and Willys in general, and showed me a Willys community that existed out there.

By 2007, after I completed my studies and now had a job, I started searching for Willys groups. I found Dave Zibrat and the Flat Fender Club of Butler, and discovered a great group of friends. From that point it was all Willys Jeeps again, going to Willys rides, shows, parades, even without my own Willys in this country! Other great finds such as eWillys.com, the Heritage Region Jeep Alliance (HRJA) Jeepfest, and the Midwest Willys Reunions, convinced me I had to get a 3B in Pittsburgh. 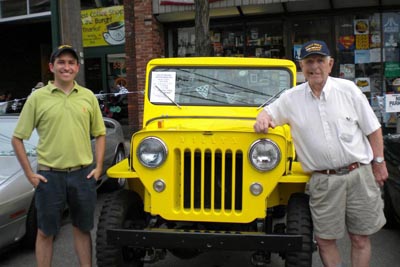 Things fell into place in 2010. Chuck Courty, a D-Day World War II veteran, sold me a 1953 yellow 3B he had restored over 4 years. It had only 11,000 miles, and had already picked up awards at the Antique Automobile Club of America's Fall Meet in Hershey PA. 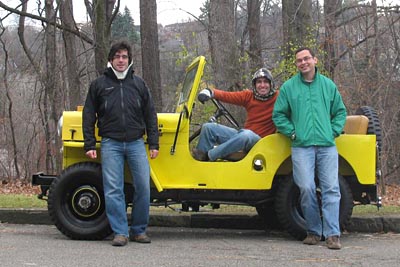 My buddies Nicolas and Camilo came to Pittsburgh to meet the yellow Willys. Nicolas was the co-pilot of the red one during the high school years in Colombia. Camilo Phillips also went to school with us for 13 years, and then went to college with me for Civil Engineering. He was the co-pilot during the college years. I owed a lot to these guys -- every time I ran out of gas (faulty gauge showing 1/2 tank when it was empty) they were the ones walking to buy more... 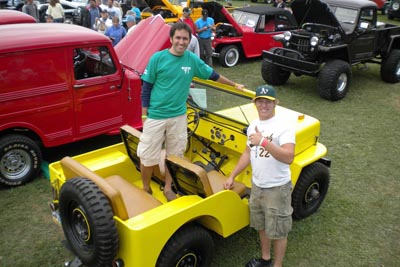 Since 2010 I have had some amazing years enjoying this yellow 3B everywhere from my favorite Sunday morning drives to all kind of antique car shows and Jeep events. My friend Bobby Siegworth is the one who often goes with me on a long trip. This is the Bantam Jeep Heritage Festival in Butler PA in 2012. 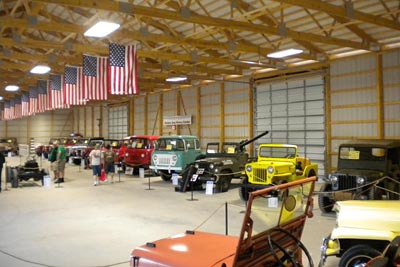 In 2013 we were back at the Bantam Fest, and the yellow Jeep represented the CJ-3B in the "Jeeps Through the Decades" history exhibit. My father-in-law Augusto Benavides took charge of getting the Willys into show condition for this display. 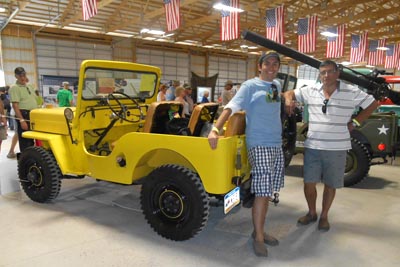 I think when I started dating my wife Ana, Augusto liked me because of the red Willys, but he really loves the yellow one. He is always up to date on where in Bogota they are having different Willys shows and selling new memorabilia. It was really special when he came to Pittsburgh around the time of the Bantam Fest in 2013. 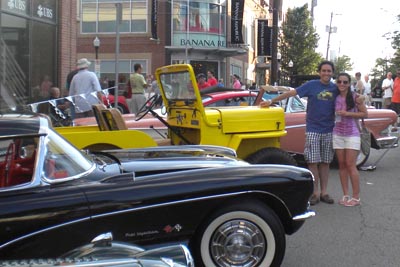 We have also been to shows right in Pittsburgh. This is Ana and me at the 2013 Walnut Street Car Show in Shadyside. It is an invitational show, so there are beautiful cars on display. Here the fifties classics are well represented by the 1953 CJ-3B, with a 1957 fuel injected Corvette and 1958 Edsel Pacer convertible. 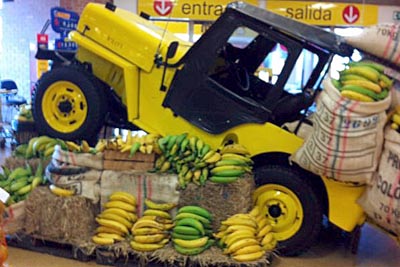 The 3B experience is different everywhere in the world. I started driving a 3B in Colombia where it was not a classic car, it was just a work vehicle that people liked. Everyone had a story of somebody in their family using one at some point. With the years it has become a symbol of the country, especially its role in coffee production and the traditional Yipao. It is easy to find t-shirts, key chains and all kinds of Willys souvenirs at airports and stores. Augusto sent me this photo of another yellow 3B, in a supermarket display in Bogota. 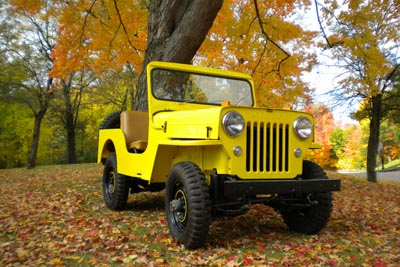 In the States there is a another view of the Willys Jeep -- it is a classic car and a development from the vehicle that won the war. It is a symbol, but of a kind quite different from a Colombian yipao full of people, coffee and bananas, and driving on only the back wheels! 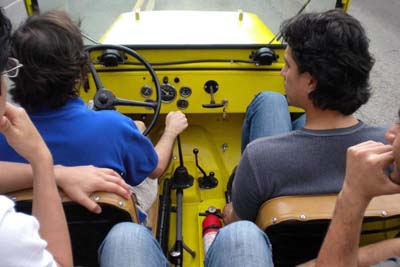 I hope I can keep my 3B's going for many years to come, making memories and great friends along the way. Besides the vehicle itself, one of the best parts of owning a Willys is the group of people that you meet in the process. That is the same everywhere in the world -- people enjoying the amazing, elegant, simple car that can take you everywhere. Believe me, life is better in a Willys. 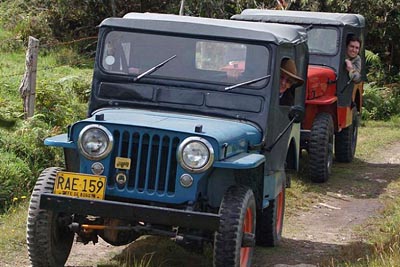 As for the blue CJ-3A, my dad has it now in Medellin, Antioquia, where he uses it regularly, and belongs to the "Willys Country Club" of Colombia. We still do trips and excursions when I'm back in Colombia.

This article is dedicated to my dad, Gustavo Lobo-Guerrero, who introduced me to this amazing Willys world.

Thanks to Sebastian for the story and photos. Thanks to Gordini Tuercasino for the Lada photo. -- Derek Redmond

See also some of Sebastian and Gustavo's photos of Jeeps in Colombia on CJ3B.info.