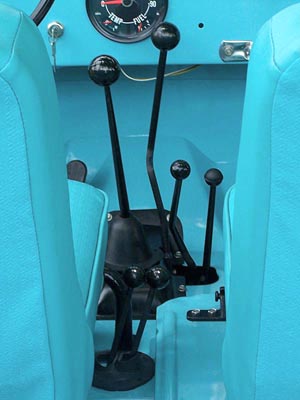 In 2007, Jim and Linda Pigg finished an eighteen-month restoration of their 1962 Jeep which was originally owned by a government agency, perhaps the Tennessee Valley Authority. It has a Warn overdrive plus front and back power takeoff, requiring a grand total of six gear shifters.

Jim photographed the Jeep at their home in Lawrenceburg, Tennessee, which is Davy Crockett country, and home to the Crossroads of Dixie Antique Tractor & Engine Club. The restoration was still not quite finished, as they were waiting for the wiring harness to arrive, but they had already made good use of the overdrive, in a highway trip the previous weekend. Jim said, "We were able to log 101 highway miles on it last weekend -- yes our fingers were crossed for good luck, but we had a wonderful experience first shot out of the shop!" 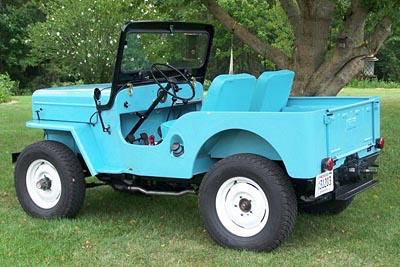 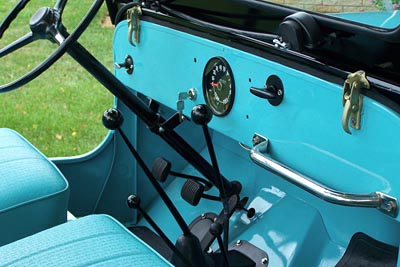 The light switch and choke haven't been reinstalled in the dashboard yet, and there is also a brass government data plate to be remounted on the dash. The Jeep was apparently repainted for government use. Jim says, "We discovered the 1962 Cerulean Blue paint under 6-7 layers of green and grey colors."

The seats have been reupholstered in the style of the original "bucket" seats which were new to the CJ-3B in 1962 (see Take a Seat, Please on The CJ-3B Page). The fabric is a perfect match to the paint. 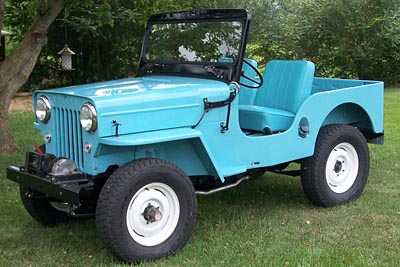 "We used CJ3B.info throughout our nearly 2-year project," says Jim, "as we pretty much started from scratch. But because it had all the extra equipment, we decided to rebuild this unit with no looking back, and go ahead and spend the sweat, time, and money." 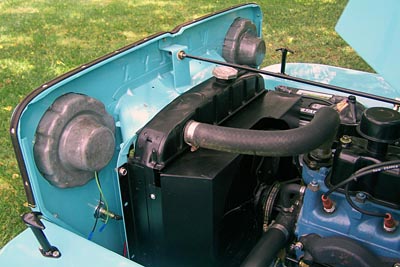 Since these photos were taken, the wiring harness has been installed, and the Novi variable speed governor is operational.

Thanks to Jim and Linda for sending the photos. They sold the Jeep in 2001. -- Derek Redmond