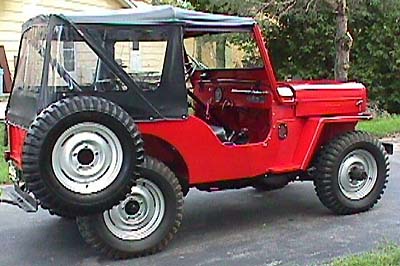 Many of us wondered who bought this 1958 high-hood after it was advertised for sale in 1998. New owner Steve Perialas sent along some photos, and the story of how he came to own the Jeep.

As of 2010, it has been passed on to the next two generations. Steve's son Bob and his two sons Nick and Jake are now the proud owners of Cherry Red, still in Michigan. -- Derek Redmond 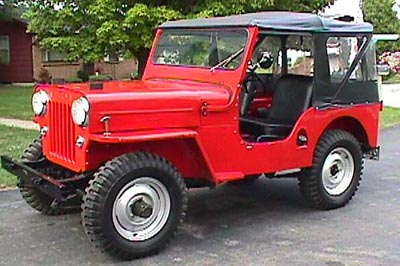 My name is Steve Perialas, and I live in Big Rapids, Michigan. About five years ago I decided to pursue my plan of collecting one of each flat-fender Willys I had as a teenager and beyond. It took me four years to find the right ones, and ironically they all have come from the Big Rapids and Grand Rapids area within the last year. My 3B "Cherry Red" is the crown jewel of my Jeep collection.

I graduated from high school in 1958, and the first car I ever owned was a red 1958 CJ-3B that had belonged to a Kaiser Jeep dealer's daughter. We were dating at the time, but I must have fallen in love with her 3B more than her, since our love affair didn't last beyond 8 months. However, my love affair with 3B's has lasted beyond 40 years and is still going strong.

That puts things in perspective, and as Paul Harvey would say, "...now for the rest of the story." The May 1998 Hemmings Motor News had an ad for a 1958 CJ3B, with a picture, and I just knew that this 100% total stock 3B with only 35,000 miles, was supposed to be parked in my garage. My wonderful wife of thirty-plus years said, "I know how much the red Jeep would mean to you, so if you agree to do some things around the house, I won't put up a fuss." Well, I'm here to tell you that I thought it would be clear sailing from there on out. Little did I know that I would have to buy three Jeeps to get the red 3B I yearned and longed for.

The guy that was selling the CJ-3B also had two CJ-2As, and he wanted out of his Jeep collection. He offered me a deal I couldn't refuse, but first I needed to convince the true love in my life, that I had to buy all three to get the one I wanted.

Now, those of you that have bought Jeeps without checking with your partner, know full well the pain and agony that has caused. All in all, spouses and significant others of Willys buffs are a pretty understanding lot, but I was concerned that buying three was pushing the envelope a bit too far. After much coaxing, house fixing, and general all-around begging, I got the go ahead to buy all three Willys, with the understanding that I would make an attempt to sell the two CJ-2As, since I already had two of those in my collection. 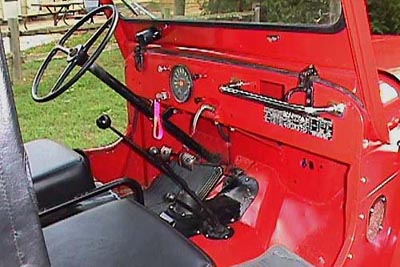 The Jeep, which I had already named "Cherry Red", was perfect in every way, with the exception of the left front brake cylinder which was leaking, a grab bar installed in the cockpit, and bolt holes on the top of the fender wells where a roll bar had been installed. See also the engine compartment (40K JPEG). 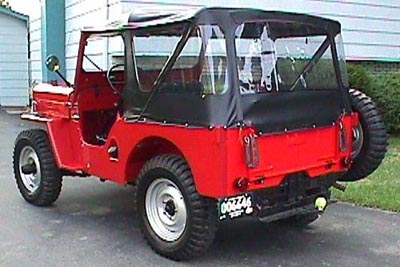 I consider myself very lucky to have found this jewel and to have such an understanding wife. For those of you who might in the future quickly agree to "doing some stuff around the house", be warned that the stuff I did around the house cost more than the three Jeeps did. But it was worth it to get "Cherry Red". -- Steve Perialas

Thanks to Steve for sending the story of Cherry Red, and good luck to the next two generations of the family, current custodians of the Jeep. -- Derek Redmond