Here's another of Lil Willy's Trip Reports from Dave and Ruth, on CJ3B.info. 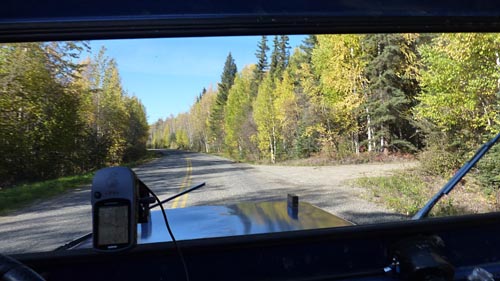 In mid-September 2010, Ruth and I took Lil Willy for a day trip to see the fall colors. This was our first autumn in Fairbanks, Alaska and we knew winter was perhaps less than four weeks away. We left our house in the hills and drove down into town for fuel, then continued on pavement until the road turned to gravel as we made our way to the top of Murphy Dome.

Murphy Dome is a 2900 ft. hill to the northwest of Fairbanks, which itself has an elevation of about 500 feet. So this trip would take us up 2400 feet, then back down the same, then back up and then back down. 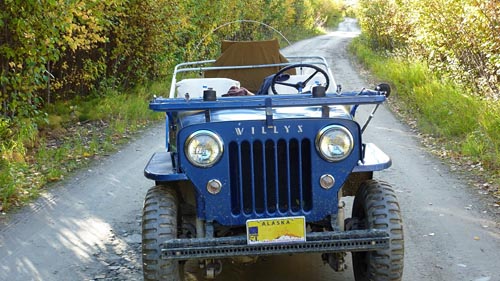 At the top of Murphy Dome is a US Air Force long-range radar antenna site. Back in the fifties the hilltop also contained a base housing upwards of 100 men and a runway long enough to accommodate a C130. Now the runway is long over-grown, and the base buildings have been removed. In their place is a large parking area popular in summer for staging ATVs, and in winter for snow machines and dogsleds. 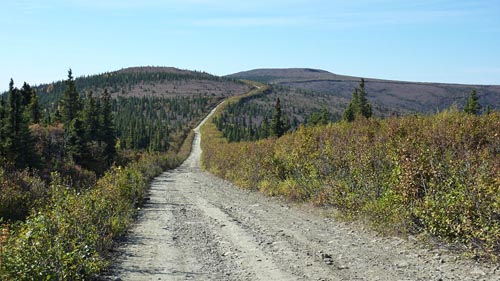 Just below the summit, we turned off the Murphy Dome road onto a well maintained dirt stretch winding along the backbone of a ridge to the west. The view is excellent up here and even though it was a bit hazy the sun-angle provided glimpses of Mount McKinley (130K JPEG) more than 100 miles to the south. 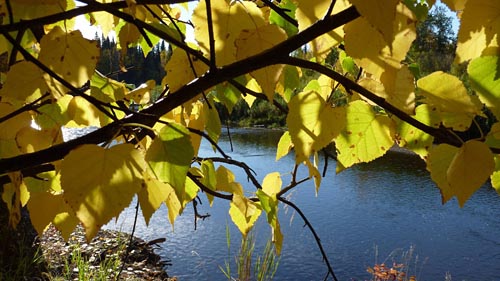 The leaves of the Birch trees and the Tamarack brush had begun to turn a rich golden-yellow. 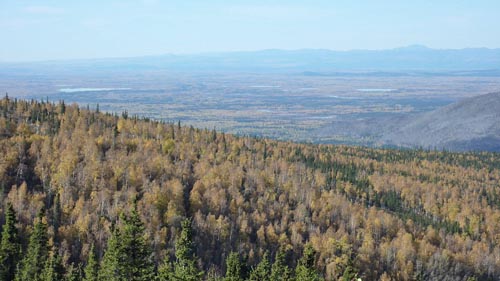 Our outbound destination was the Chatinika River at the northwest base of Murphy Dome. The Chatinika (the first "i" is silent) is a small river draining parts of the White Mountains north of Fairbanks. Just past where we would intercept it, the river flows into the Minto Flats, a large marshy lowland region. From the flats it flows into the Tolovana, then the Tanana, and finally into the mighty Yukon River where it makes its final journey into the Bering Sea on Alaska's west coast. 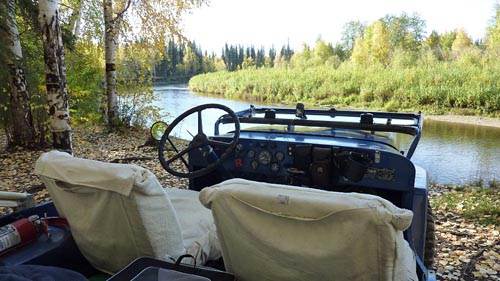 After driving on top of the world for awhile we began to descend into increasingly taller trees (300K JPEG) as we neared the river. At the river we stopped and enjoyed the peaceful surroundings for about an hour and ate our lunch. 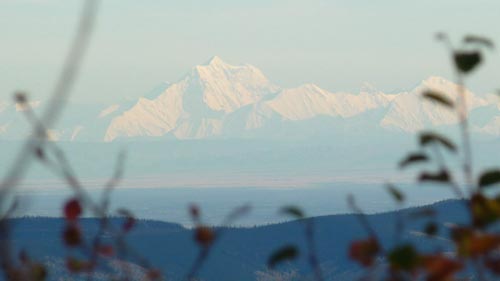 On the way back out we stopped at a high point and took some zoomed in long shots of Mount Hayes, and Mounts Hess and Deborah of the Alaska Range. 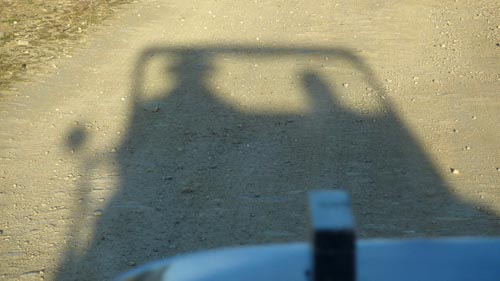 Once off the Murphy Dome road we had only encountered three other people in two trucks. The whole trip was about 70 miles, with maybe 30 of that on dirt. It was a beautiful, clear fall day with lots of sunshine. We hope you enjoy the pictures.

Thanks to Dave and Ruth for more nice photos from Alaska. All of their stories are at Lil Willy's Trip Reports on CJ3B.info. -- Derek Redmond