At 46, I should have outgrown my teenage desire for a Willys CJ-3B, but my search for a 3B started when I was a teenager. My first and only Jeep had been purchased at 13 years of age. I was extremely proud of my 1948 CJ-2A until my brother drove his '53 "high hood" down the driveway. I knew then and there I was going to own one someday. 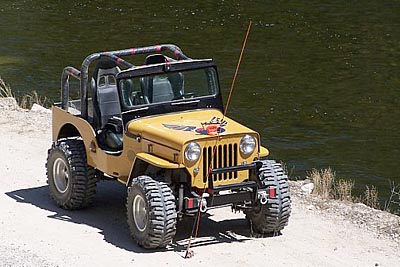 Fast forward some 30 years later. With a teenage son ready, I finally had to start a project Jeep. In the end I wanted my Jeep to be as perfect as possible. So I was disappointed at what there was out there to start with. Most Jeeps around the wet climate areas of the Pacific Northwest were not worth restoring because of the amount of rust that had accumulated over the years. I just about gave up.

Then, two years ago, a Jeep appeared on eBay, located in the dry desert climate zone of central Oregon. It turned out to be perfect, very little rust, frame true and straight. The Jeep had never been rolled, hacked on, butchered up, or in any kind of auto accident. 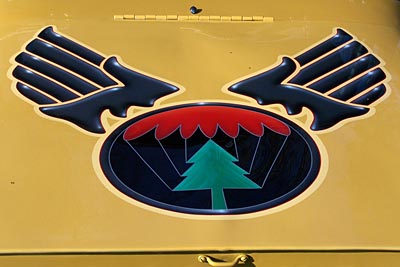 And it had history, or at least a pedigree. The seller of the Jeep knew the original owner. He was a smokejumper, stationed at the North Cascades Smokejumper Base in Winthrop WA, who used it when employed there during the summertime (1965-67).

The Jeep was a favorite among the jumpers, who liked to drive it into Winthrop for "barley pop" (beer) runs after work. 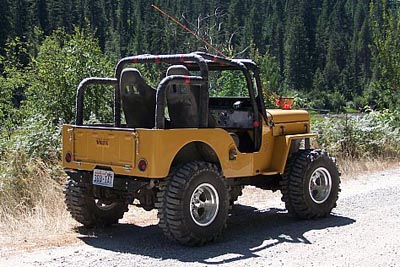 The seller also told a story about how, one summer, the original owner "boosted" another smokejumper base in Missoula, Montana. That summer in western Montana was a particularly bad year for forest fires, so the call went out for jumpers from North Cascades to "boost" the airborne firefighters of the Missoula Smokejumpers Base.

The owner of the Jeep elected to drive the Jeep the distance between Winthrop and Missoula. He probably knew there was a good chance he would be stationed at Missoula the rest of the fire season.

At the completion of the season there was time for a slight detour south into some of the most beautiful wilderness in Idaho. 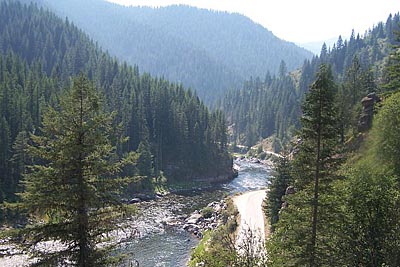 I am familiar with that area, and after consulting a map I decided that when the Jeep was restored I would trailer the Jeep to the start point and retrace the route the smokejumpers used over the Bitterroot and Clearwater mountains of Idaho. The area encompassed over 1.5 million acres of National Forest land. I've fought my share of wildland fires, and I know this part of the country to be a perfect place to rest and fish and camp for a couple days of relaxation. The photo shows the North Fork of the Clearwater River.

Planning the trip during the restoration of the Jeep was good motivation. Simply put, I knew the country that I would be driving through was very remote, so restoring the Jeep to a high level of dependability would be very important. 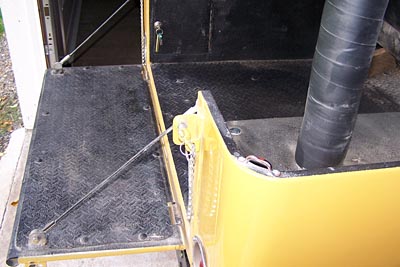 The flush-mount taillights were already installed. I'm glad because I might want to build a rear rack in the future. (One less thing to fabricate around.) 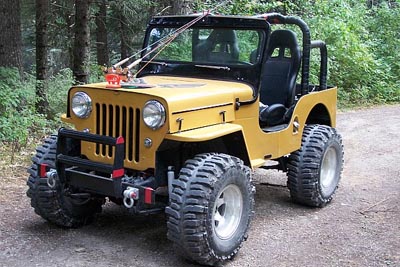 The fishing rod holder attaches to the hood by suction cups. And yes, it stays stuck to the hood even on the worst roads. (Note: since it is held on by vacuum, the hood must be flat and clean at the attachment spot.) 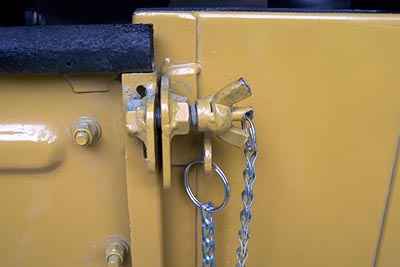 I modified the tailgate for a rattle-free ride, with 1/2-inch bolts with wing nuts welded on top and lightweight chain added. And the Jeep was attached to the frame on high-impact rubber disks, so it has no rattles or squeaks when driven, even off-road.

As near as I can tell from the Paint Samples on CJ3B.info, the original color (70K JPEG) was Foam Green. The new color I chose is "New Cat Yellow" from the Sherwin-Williams automotive paint line, the same color that Caterpillar Inc. paints its equipment. It shows very little dirt, is easy to clean, and has a high visibility factor.

The hood art is the smokejumper insignia, as a tribute to the hard work backcountry fire crews do each summer. 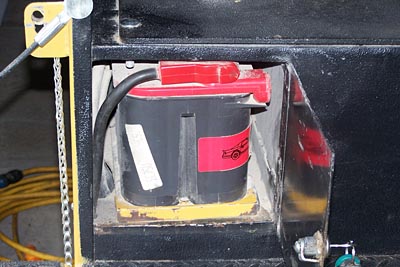 I changed the location of the battery, removing it from the right fender and modifying a new battery location behind the left rear wheel well. One of the few spots on the Jeep that needed attention was the right fender -- it was showing signs of stress from the battery weight. And I was going to install a larger engine, so I moved all extraneous items to a "better" location. The placement of the new battery is, from a engineering point of view, ten times better than the right fender, or even the firewall... and now that it's done, I think it is the perfect place for a battery!

I also added a glove box behind the right rear tire (140K JPEG) to help make up for the space lost when I added the passenger-side gas tank. 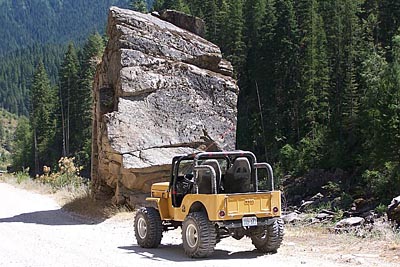 I completed the modifications to "The Smokejumper" in March of 2007, after a year of almost non-stop work during my free time. I could not have done it without CJ3B.info.

I trailered the Jeep to Idaho in July 2007, to retrace its journey through the wilderness 42 years later. The weather was beautiful, the scenery spectacular (150K JPEG) and the fly fishing was wonderful.

The Jeep performed flawlessly and we had so much fun, we plan on doing it again next year! The summer of 2008, the family will head back to Idaho, but this time we will be retracing, via the Lolo (low-low) Motorway, the route used by Lewis and Clark as they crossed the Rocky Mountains of Idaho. The word "motorway" is a term used for the single lane dirt road carved through the mountains during the 1930's. Most of the terrain is identical to when the explorers crossed the mountains in 1805 and 1806. It lies within the Clearwater National Forest. -- Eric Johnson

Thanks to Eric for the photos and story. -- Derek Redmond