Weekend in the Tobacco Root Mountains 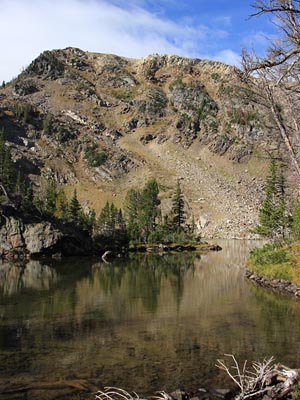 John Goering has been taking his Chevy-powered high hood into the mountains of Montana since the 1970's (see Wolf in Jeep's Clothing on CJ3B.info.) The Tobacco Root Mountains in southwest Montana, between Butte and Bozeman, is his backyard.

If you want to follow John's trip on an aerial photo, go to Google Maps (opens in a new window) and click on "Satellite". Interestingly, you can see the Tobacco Root range even in the continent-wide view, if you know where to look; it is a distinct 20-mile wide patch surrounded by valleys. Type "Mt. Bradley, Montana" into the Search field, and you will see this little lake where John spent a September 2013 weekend, about a mile southeast of Mt. Bradley. You can zoom out slightly to see the whole range, or zoom in to see the lake in detail.

John gives some background: "The Tobacco Roots are situated between the Madison River drainage on the east, and the Jefferson River along with its tributaries, the Ruby and Beaverhead Rivers, on the other three sides. The historic gold mining boom town of Virginia City sits on the south edge of the range and remains the county seat of Madison County. As would be expected in an area with a rich and varied mining history, there are Jeep trails in most every drainage." 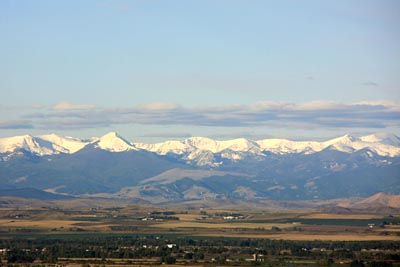 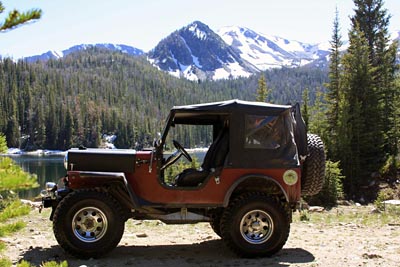 A couple of years ago, John told me, "North Meadow Creek is probably my favorite close-by area, about 40 miles from home. It has by far the most challenging trail in the Tobacco Roots, but it is both fun and rewarding. The drainage splits about 2 miles in, with the north branch ending at Upper Twin Lake. The south branch leads to Lilly, Mine and Cliff Lakes. The Jeep road is only about 5 miles but it takes 2-3 hours. You can walk it faster than you can drive it. I'm not sure you could get a stock 3B in there anymore -- there's more rock every year.

"On this summer 2010 trip I parked the Jeep in front of the mountains at Upper Twin Lake. " 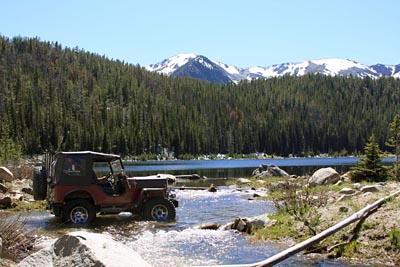 "The shot where I'm in the water is at Lower Twin Lake. The same two mountain peaks are in the background. Neither peak has been named (sort of hard to believe), but the snow-covered one in back is 9970 ft. in elevation." 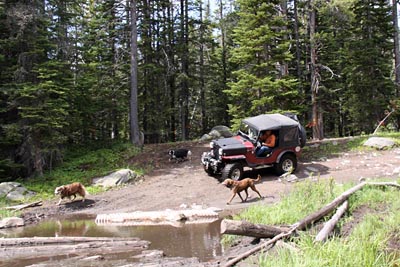 "You might get a stock JK/TJ up here, but highly likely they will not look too good after the run. Lots of boulders and tight spots and I'm going to say lockers and/or winch necessary, but the rewards are some great scenery.

"Thanks to Marge Levine for taking this 2010 photo with the dogs." 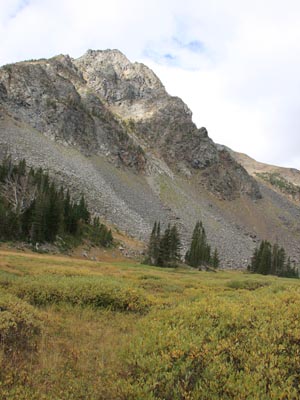 For much of 2013, John had the Willys in pieces in his garage for upgrades, but in September he had it back at North Meadow Creek:

"At the end of the Jeep trail, it still requires a 1.5 mile backpack trip. My wife Petrea and I try to make it there at least once a year -- probably our most favorite place. She had last Friday off, from working both days of the prior weekend, so we did a 3-day trip. Weather wasn't exactly nice and the rain gear did get a workout, along with every piece of clothing we brought along.

"This is Lower Bradley Meadow, and Lady of the Lake Peak -- just starting to get some fall color. There are 43 peaks in the Tobacco Roots that exceed 10,000 feet in elevation, one of them being Lady of the Lake (10,218 ft.)" 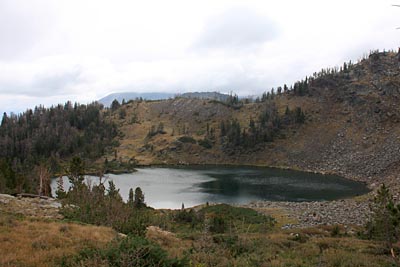 "It started raining just as we got to the lake, and I threw the rain fly over the tent before I put the poles in, but didn't get it too wet. The lake is un-named, nestled under Lady of the Lake Peak.

"There are 6 lakes in the North Meadow drainage and all have decent fishing. Lower Twin Lake has brook trout, an abundace of brookies, and none of them get very big, with 12" being a big fish. Upper Twin has cutthroats and maybe some cut/rainbow hybirds. The little lake we were at has westslope cuts only, and some of those are nice, 1 to 2 pounds." 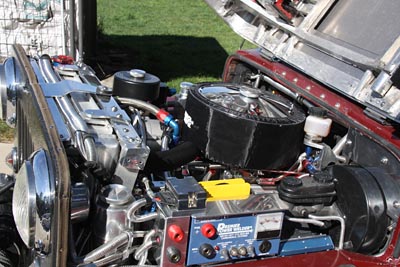 John was pleased to have the Jeep back on the trail:

"After being scattered over the garage for a big piece of the last year for a valve train change (including cam), the addition of a welder, and several less obvious additions, the Jeep is back in the Montana mountains doing what it was made for.

"Here are a couple of under-hood shots in the current configuration." 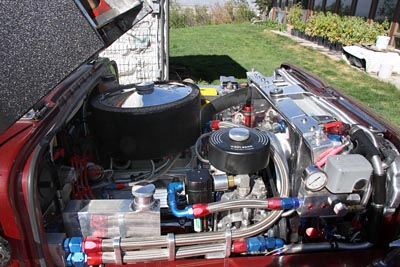 "The Solberg air filter sits on the York pump intake for the on-board air system. The output runs through the compression relief valve, then air/water separator which has a valved return to the pump to recycle any oil, and then to the manifold block with the pressure gauge and safety release valve. System is currently set at 140 psi maximum with the adjustable Square D pressure switch on top of the manifold. The two plugged ports on the manifold are for the ARB solenoid switches for both axles which hopefully will both be swapped out this winter. The new axles will be a high pinion Dana 44 up front and a full float Ford 9-inch in the rear." 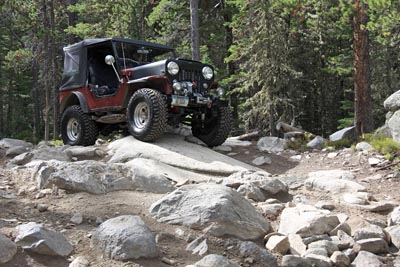 "This trip was the 3B's first real outing since the major backshopping, and it did provide at least one apprehensive moment when it didn't want to start after sitting 3 days. Had to do a little keystroke work and reset the cold starting on the FI, but success."

This picture taken by Petrea was the October 2013 cover photo for CJ3B.info. 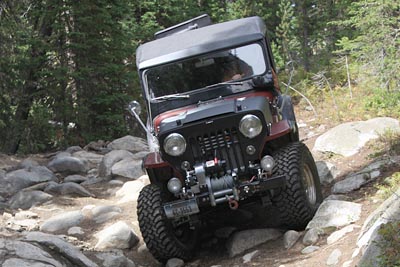 John admits, "I definitely had a few wheels in the air -- the trip gets more interesting every year.

"I slipped off one boulder and got high-centered on the skid plate (which required a little winch work). I didn't break anything so guess it was a good trip." 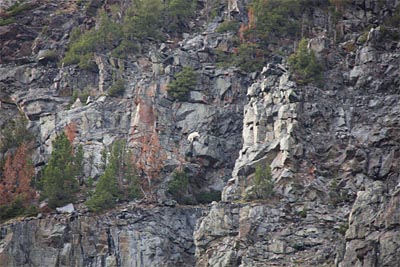 "We usually see a number of mountain goats, and this weekend was no exception. One tripped over a tent guy line in the middle of the night. I'm afraid this token goat shot is from too far away." 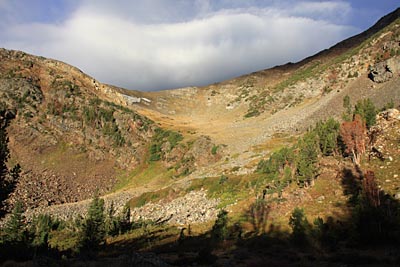 "Just scenery. There are literally hundreds of places to wheel in Western Montana. Willie and Jeanne Worthy have published 4x4 Routes of Western Montana, on trails around the Missoula area, and I believe they are working on a couple more."

"Except for the Beartooth Plateau (that's another story), the Tobacco Roots are my most favorite place."

Thanks to John Goering and Petrea Hofer for the photos and comments. See more background on John's Wolf in Jeep's Clothing on CJ3B.info. -- Derek Redmond