A good friend of mine had a CJ-7, and I had a Chevy Z71. We went riding one afternoon and the Jeep just went places my Chevy couldn't. Thus a desire for a Jeep starts. I tell my friend I want a Jeep "cheap" -- he wheels and deals a lot. A few weeks later he calls. "I bought you a Jeep." $500. He says it's an older model but it runs and drives. 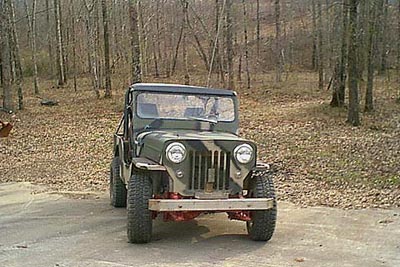 When I got to his house, there was the 3B. Someone had installed a plywood top. The paint was drab green, which they held leaves against and sprayed over with white, to outline the leaves for a camo effect.

The top was removed before I even drove it. It ran out OK, and the drivetrain worked. I paid him and towed it home. After a week and some minor repairs I had it running well.

Two days later while testing it in the woods behind the house, an engine knock developed. Rod bearing. The tear down began -- I rebuilt the F-head, removed all the interior, and ripped out the wiring harness (what was left of it). 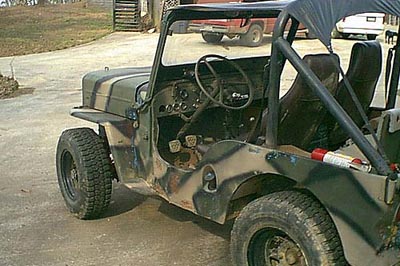 My son and I cleaned the interior with a grinder and a wire wheel, sprayed a new coat of primer, and repaired any minor body rust. While I was waiting on the parts to rebuild the F-head, I sandblasted the frame and repainted it. I installed all new brakes, wheel cylinders, and shoes in the front. I changed the steering box out with one from a M38A1. It appears to be a little heavier, but an exact fit.

I installed the bucket seats from a Chevy Cavalier, an electric wiper motor, roll bar, and some new gauges. I covered all the floor and fender wells inside with brown indoor outdoor carpet and glued it in with outdoor latex adhesive. It works great and prevents the paint from being worn off from your boots. The back seat is home made (had to have something for the kids). A plywood rack on the back holds two coolers for those long trips. That was a 30 minute add-on, right before we left for the woods. 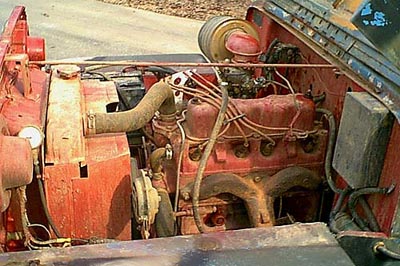 Once the F-head was back in, I rewired everything. The blue box on the firewall is my new sealed fuse block with 8 blade-type fuses. The box is a plastic project kit box from Radio Shack, about $5 -- it's easy to drill, and the cover installs with four screws. I also added a spin-on oil filter from NAPA, $30.

In the near future the F-head will be removed, and a Chevy V6 put in its place. The T-90 will stay until I find a 4-speed. 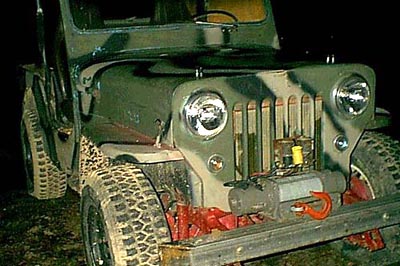 In front of the 31 x 10.50s is a stainless steel bumper, with a removeable Warn 6000 winch. Future accessories will include an onboard air compressor powered by the engine. I have built one of these before on a pickup, and they work great -- all you need is an old Ford air cond. compressor, pressure switch, gauge, toggle switch, tank, and some hose.

Other future plans: an entire strip and repaint this summer -- I will probably stay with the camo. Dual batteries for the winch. A high output alternator and a new gauge package. A full top with doors. A spring over lift, new springs, and bigger tires -- 33" or so. A full roll cage with the C.B. and radio mounted up high. A front brush guard to match the stainless steel bumper. And a waterproofing kit, home made. -- James Fulk


Thanks to James for the photos and story. -- Derek Redmond