Here's the story of a Jeep that stirred up quite a bit of interest when it was offered on eBay, and how it ended up in the possession of Mike Bowen in Texas. -- Derek Redmond

Ponce de Leon searched for the Fountain of Youth, and intrepid explorers throughout the centuries have sought the lost city of Atlantis. Those of us with "Jeep Fever" have a quest that is nearly as all-consuming -- the search for the mythical "barn find." We seek, mostly in vain, for the good farmer who has tucked away, in a hallowed corner of his barn, the object of our desire: the pristine, unmolested vintage flatfender Jeep. Like new fallen snow, a fine layer of dust covers the original paint and tires. Rust? Ha! There is no rust. Mileage? What mileage? Old Farmer Brown only drove it out to check his fences and to church once in a while; heck man, this Jeep is hardly even broken in! 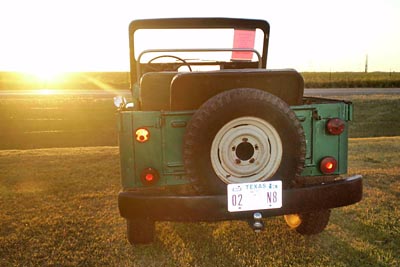 Many of us who suffer from Jeep Fever have befriended this mysterious farmer from time to time and have beheld his "virgin" Jeep. Some of you will remember the farmer, the barn, the Jeep. And, you'll painfully recall what happened right after you handed Farmer Brown five crisp one-hundred dollar bills and he handed you the keys and title. Come on, yes you do. You woke up from your dream and got ready for work!

As we are all aware, most old flatfenders have spent the last 40-60 years out in the elements, where rust has taken its toll. They have been driven to death by infidels, deprived of lubrication by the irresponsible, molested by rabid welders, painted by idiots, modified by fools, or all of the above. Finding the pristine Jeep is difficult -- but, even today, not impossible.

I got the Jeep bug about three years ago. I'm fifty and can still remember the Rat Patrol and Combat TV shows from my childhood. I've always loved the old flatfenders, but until I raised my family, I never had the time or the money to own one. 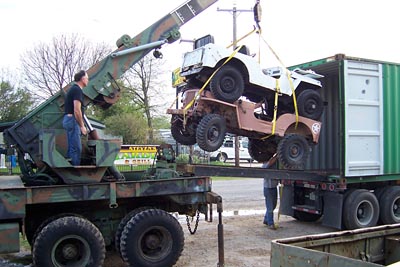 When I first got into Jeeps, I didn't know anything. My first Jeep was a DJ-3A body on a CJ-2A frame. From there, like a crack addict, I bought and sold Jeeps to support my "habit." In the span of three years, I must have bought and/or bartered at least a dozen Jeeps. EBay fueled my addiction, and like you, when in my car I kept an ever-watchful eye out for roadside "treasures." Few were driveable. I continually traded up or bought a Jeep for the tires, PTO or other coveted parts, and sold the rest to a fellow Jeep addict. I sent three containers to England -- I have a friend in Manchester. Yes, the M543 wrecker was ours, and it was safer than using a forklift (80K JPEG). 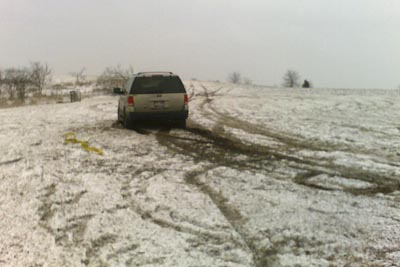 During this time, I learned that every man doesn't look at rust in the same way. I once drove all the way to Kansas to pick up a Jeep from a farmer's field. At this point I need to warn you that just as there are good farmers with good Jeeps, there are evil farmers with bad Jeeps! If you've seen The Wizard of Oz, you'll get the picture.

It was snowing and I got stuck in the muck from the rain the day before and nearly froze to death before being pulled out by another farmer with the tractor from hell; a real monster. My evil farmer didn't have a tractor. His eBay auction had read: "This Jeep came from California; no rust." Well, I guess, technically that was true; since the floors had rusted out and were completely missing, technically I guess there was no rust. Live and learn. After that, I got very specific with my questions and asked for lots more photos, when buying off eBay. 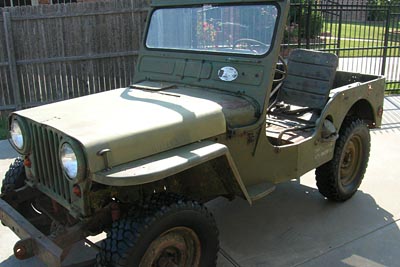 My last Jeep (before the one I'm about to tell you about) was a 1951 M38 military Jeep. It had no rust and a freshly rebuilt motor. I had just finished collecting all the parts for it, including a complete 24V electrical system, when an amazing thing happened. I had bought another M38 simply because it was too cheap to pass up. Shortly after putting it on eBay to get money to buy tires and other odds and ends, I struck up a conversation with a guy from Houston who was interested in buying it. Before long, I told him about my other M38 and my M416 Jeep trailer. I also told him about my lack of the time necessary to put the Jeep together. Then, I realized that what I really needed was a Jeep that I could tinker with, not rebuild. 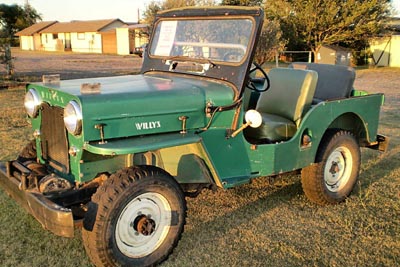 Miraculously, I went on eBay that night and, Voila! There it was -- the ultimate "barn find" (cue the bright light from the heavens, choir singing "Ahhhhhhhh" and a hundred violins.) Since I found it on eBay, I call it my "E-Barn" find (cue the light, choir and violins, again.)

What's funny is that until I saw that Jeep, I thought CJ-3Bs were ugly! With this beauty, however, it was love at first sight! My "3B" was a swan, not an ugly duckling; I immediately wanted this Jeep. Coincidentally, the guy from Houston really wanted my M38 collection. So, I made him an offer. I told him that if he would drive the 600 miles from Houston to Amarillo, buy the 3B and tow it 360 miles to Mansfield, Texas, I'd give him all of my M38 Jeep stuff for it. Like a true Jeep addict he actually did it!

Warning! The description of this "barn find" will give you a case of Jeep Envy. Read it at your own risk: 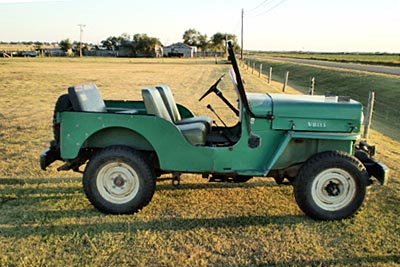 This amazing un-restored CJ-3B Jeep, serial number 87755, was built in December of 1961 and purchased new in 1962 by a man who lived in Kerrville, Texas. It was used sparingly as a hunting Jeep and kept (you guessed it) in his barn. About eleven years ago, the man got too old to use it, so he sold it to his cousin and her husband, who lived in Amarillo but had a ranch in New Mexico. They wanted something to drive in and around the ranch. From 1962, to when they bought the Jeep, it had been only been driven around 6,000 miles. Whenever it was taken hunting or to the ranch it was put on a trailer; it was never dragged behind a vehicle. When not in use, it was in the shrine. I mean the barn. When they sold it to me, it only had 7,092 miles on it -- no kidding! 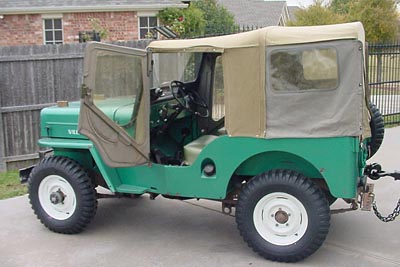 The thing has no rust, no body damage, runs like new, and has fully functioning electrical components; gauges, lights, horn, etc. It's never been repainted and the paint on the underside is about as nice as the paint on the body. As you can see in the "before" eBay photos, it didn't have a top -- or so I thought when I bought it! When it arrived though, it had a full canvas top and all the brackets in the bed. Burl said he had never used the top and that it had been in a box in his barn since he bought it from his wife's cousin. I almost forgot to mention that the original jack, tire tool, and tailgate chains with the matching green vinyl covers were still in and on the Jeep. Oh, and he insisted on filling the tank with gas! 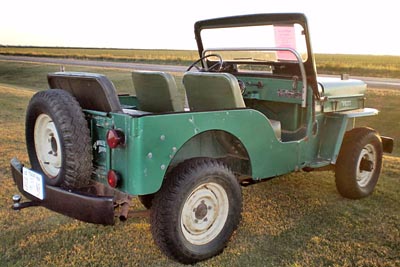 The Jeep only had a few non-original items on it. The first owner had put big bumpers on it, and a hand rail across the dash (90K JPEG). The bumpers may account for the taillights and body being undamaged. I completely removed the rear bumper and trimmed the curved ends off of the front one in order to make it look like a Jeep bumper. It was well made and included a fully functional Ramsey model 200R 8,000 pound PTO winch (insert grunting and chest beating here) so I didn't want to replace it with a correct Jeep bumper. 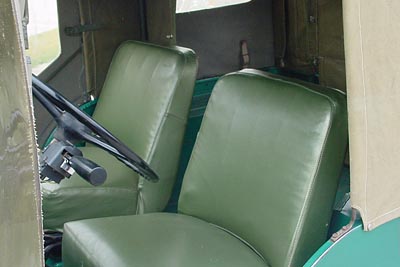 The paint, glass (including rubber seals) and rear seats are original and in great shape. The Jeep even had the original Goodyear Suburbanite tires! The front seats had been recovered (professionally, it appears) by the first owner. I can see indentations in the "new" vinyl from what must be the original gray vinyl underneath the tops of the front seats. The front seat tops have the original springs inside. The bottoms were replaced by foam when they were recovered. I bought some gray vinyl paint and will color all the seats close to the original gray color. I won't paint the body due to its very nice original condition. There are wear marks and scratches on the body, but they add to the character of the Jeep. 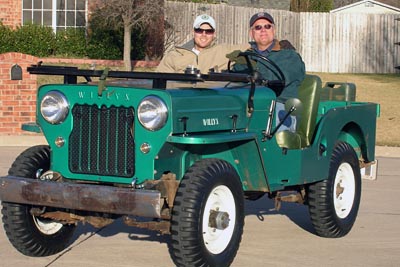 Besides removing the bumpers and the hand-rail, the only thing I've done to it is strip and paint the original rims, replace the original Goodyear Suburbanites with NDCC tires including the spare now on the right side (100K JPEG), wash it, wax it, and add a pintle hook so I could pull my new Jeep trailer. I got the trailer (150K JPEG) locally, from a guy who copied an old Jeep trailer with a 3 x 5 foot bed version.

January 2009: I removed the Ramsey 200R winch and I'm in the process of sanding and painting the front and rear bumpers. The young man seated next to me is my son Steven, who died in 2011. I sold the Jeep soon after.

Well, my fellow Jeep Fever sufferers, I didn't find the Fountain of Youth (though I did feel like a kid when I played with this thing!) and I haven't discovered the lost city of Atlantis, but I have made the mythical "barn find" that we all seek. My story just goes to show you that the barn find is still out there waiting for you. Just keep looking!

Thanks to Mike for his story. -- Derek Redmond