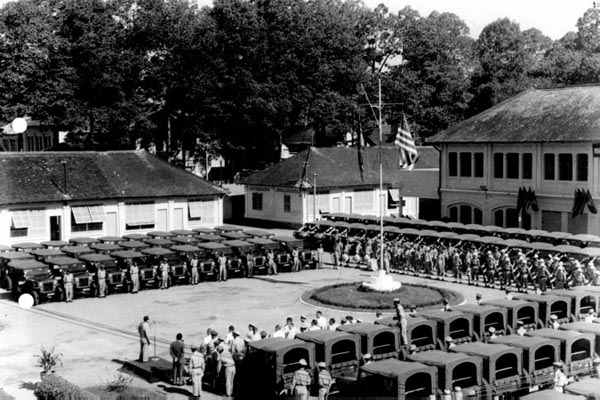 One hundred Jeeps were lined up at Vietnam's Civil Guard headquarters in Saigon on 28 May 1957. In a footnote to one of the strange stories of American involvement in Vietnam, the new Willys CJ-3Bs were being presented to the Civil Guard by Michigan State University.

The Michigan State University Vietnam Advisory Group was an administrative training and technical assistance program in the Republic of Vietnam from 1955 to 1962, on behalf of the U.S. State Department. A major component was training and material assistance for police forces, from the MSU School of Police Administration and Public Safety.

According to Technical Assistance In Vietnam: The Michigan State University Experience, by Robert Scigliano and Guy H. Fox, the Civil Guard was a 60,000-man organization which MSU wanted to turn into something similar to a U.S. state police force. The South Vietnamese government and the U.S. military preferred that the Civil Guard be a centralized, heavily armed paramilitary force which could support the national army. As a result of this disagreement, progress was slow, and the Civil Guard was not ready to effectively assist in fighting the Communist insurgency which began in 1959. But among the police equipment which had been provided, were these 100 Jeeps. The photo comes from the Michigan State University Archives & Historical Collections. 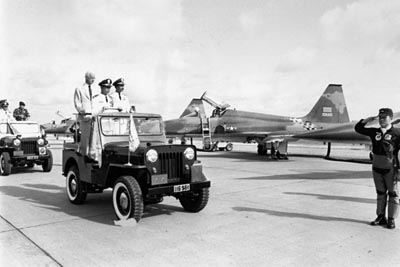 Ten years later, when the Vietnam War was well underway, another ceremony saw the United States present twenty jet fighters to the Vietnamese Air Force. The VIP's rode in customized, late-model Kaiser Willys CJ-3B parade Jeeps, seen in this photo from the Douglas Pike Photograph Collection of The Vietnam Center and Archive at Texas Tech University.

In the background are the twenty F-5 Freedom Fighters. The Northrop F-5 was one of the most successful jet fighters of the 20th century, and was exported to many American allies. As of 2014 it's still in use by air forces around the world. See a photo of an airborne Vietnamese Air Force F-5 (100K JPEG); the VNAF insignia was similar to that of the USAF, but with red and yellow bars. 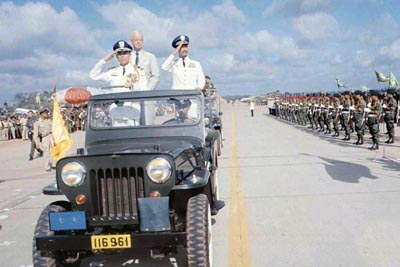 Also on hand for the event on 1 June 1967, was LIFE magazine photographer Co Rentmeester, whose color photos are in the LIFE photo archive. Riding in this Jeep is Ellsworth Bunker, U.S. Ambassador to South Vietnam from 1967-1973. Beside him is Prime Minister Nguyen Cao Ky, and in the front is Brig. Gen. Tran Van Minh, Deputy Commander of the VNAF. A closer view (150K JPEG) of the dignitaries also shows some details of the Jeep, including the Willys hubcaps. 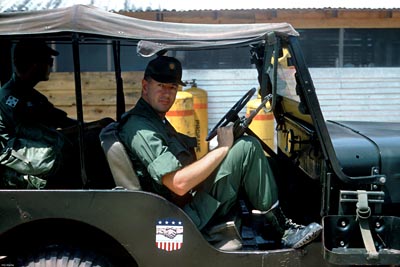 The U.S. provided Jeeps and other equipment to the Republic of Vietnam under the Mutual Defense Assistance Program, identified by the shield on the side of this Kaiser Jeep M606, with U.S. Army Major H.G. Waite riding shotgun in Bien Hoa, October 1967.

See also the artwork for the MDAP sticker (130K PNG) designed by Eleanor Gault, an employee in the Marking and Labeling Office of the Mutual Security Agency, in 1953 (Wikimedia). 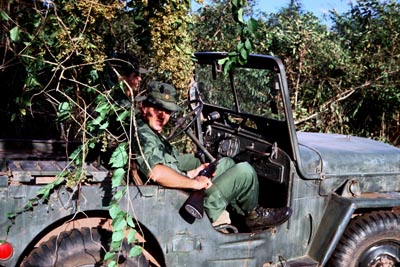 An interesting comparison with the M606 is provided by this picture of Major Waite riding in a Mitsubishi CJ3B-J4 at Duc Tu in November 1967. The Japanese-built J4 is identifiable by the split-pane windshield with air vent, the military-style dashboard, and the electrical connection cutout in the hood. 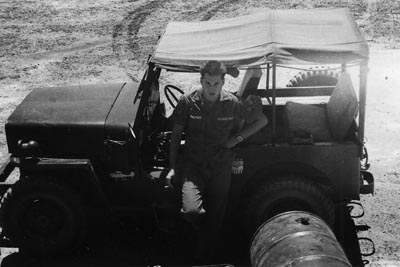 This photo clearly shows Kaiser's militarized M606 version of the CJ-3B, with blackout light on the front, and bumperettes and pintle hook on the rear. The photo was taken by David Andrew Sciacchitano, and shows A2C Walter Wohlfert of the 20th Tactical Air Support Squadron at La Vang airfield in August 1967. The 20th TASS flew Cessna O-1 Bird Dog reconnaissance planes out of La Vang, south of Quang Tri City. 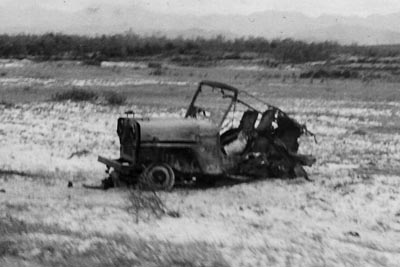 David Andrew Sciacchitano also snapped this picture of a Mitsubishi Jeep destroyed by a road mine on Highway 1 between Quang Tri City and Dong Ha, in August 1967. 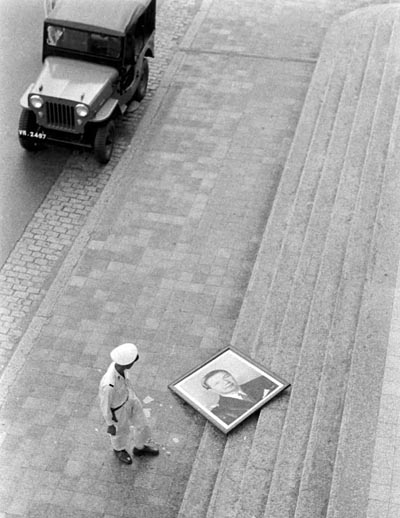 Civilian Willys CJ-3Bs had been in use in Vietnam since the early fifties; this shiny new Jeep appeared in a series of photos taken by Howard Sochurek for LIFE in 1955, documenting a political crisis in which exiled leader Bao Dai (whose portrait is seen here) tried to seize control of the army. Some of the pictures appeared in a LIFE article of 16 May 1955, headlined "Night of Lurid Drama in Saigon Palace" (150K JPEG). 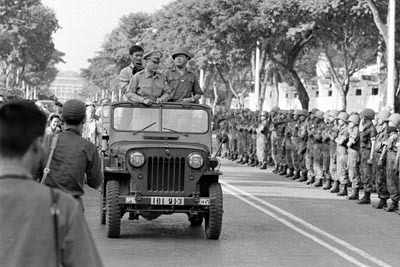 When the Army of the Republic of Vietnam (ARVN) needed thousands of Jeeps, it was logisticaly easier to import Mitsubishi J4's and 24-volt J4C's (seen here) from Japan. These LIFE photos by Robert W. Kelley were taken during the February 1965 coup in Saigon, which resulted in a junta including Air Marshall Nguyen Cao Ky taking control of the government. 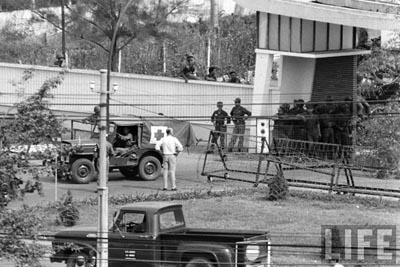 Visible in this shot is an ARVN ambulance based on the Mitsubishi CJ3B-J4C. 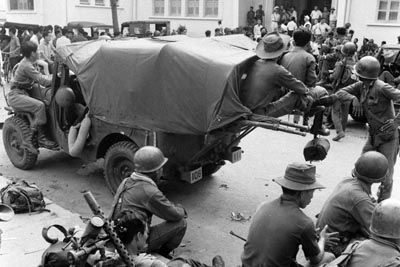 The stretcher extension on the back of the J4C ambulance conversion serves as a seat here, as soldiers and citizens wait to see the results of the political and military maneuvering during the coup and counter-coup on 19 February 1965.

By 1965 the Civil Guard seen at the top of this page had been merged into the ARVN, and those 100 police Jeeps were lost in a sea of military high hoods.

Thanks to Federico Cavedo and the photographers, and the LIFE photo archive. -- Derek Redmond