Here's a great story about a guy who remembered the high-hood Jeeps he saw in Vietnam 50 years ago, and decided to recreate one when he restored a 1954 CJ-3B. Johnnie Peoples was one of the "sky soldiers" of the 173rd Airborne Brigade. They arrived in Vietnam in May 1965, the first major ground combat unit of the U.S. Army to serve in the country (Wikipedia). I'll let Johnnie tell the rest of the story. -- Derek Redmond 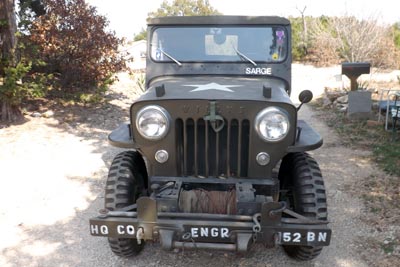 The title shows my Jeep to be a '53 but the VIN number 454GB2 17518 indicates it is a '54. I purchased the Jeep here in Granbury, Texas in 2012 from a guy who said he'd had his fun with it, now it's someone else's turn. It was gray in color, possibly primer. Overall the body was in great shape.

My son and I got out any dents, sanded, then painted with Korea/Vietnam OD green. We hand painted the stars on the side and hood. The "US Army" and VIN number on the hood are decals. 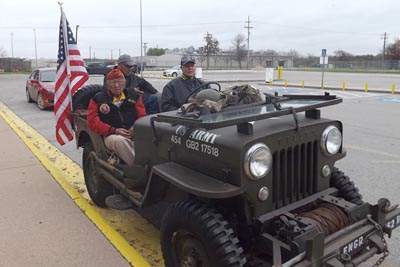 This photo was taken at Naval Air Station Ft. Worth in 2015. I was escorting a Navajo code talker at an event honoring the WWII code talkers.

(A US Marine signal officer has stated, "Were it not for the Navajos, the Marines would never have taken Iwo Jima." Navajo code talking was also used in Korea, and briefly in Vietnam, and according to Wikipedia is the only spoken military code never to have been deciphered.) 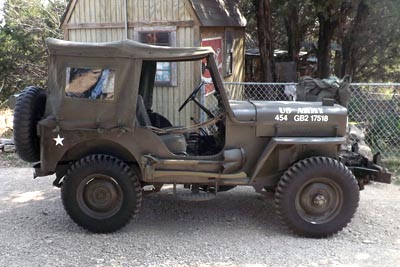 I've tried to make the Jeep look like an M38 as much as possible, plus CJ-3Bs of the Vietnam era. I went by photos and memory of ones I saw in Vietnam in 1965-66. 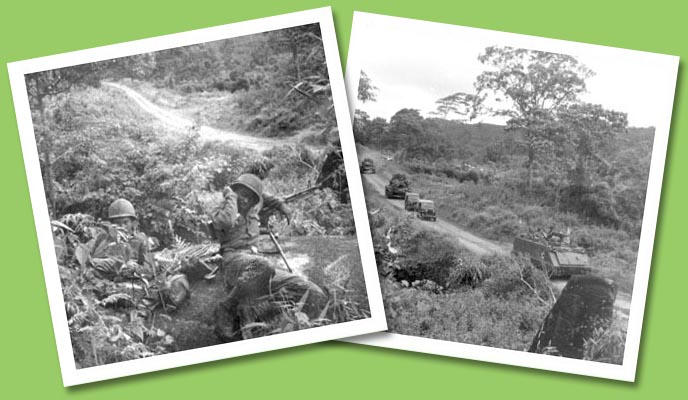 I was an M-60 machine gunner in the 173rd Airborne. These pictures are from August '65 -- we were guarding a highway so the Vietnamese Army could come through after being ambushed on the road earlier. We're relaxing, waiting for the convoy to come through. Then the convoy, including some CJ-3Bs. 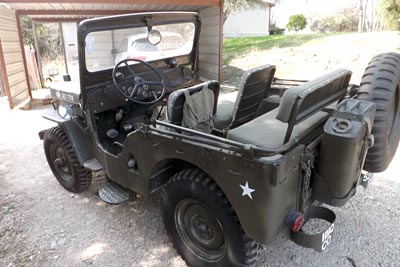 For my restoration I purchased the canvas seats and the top canvas and side curtains (270K JPEG) from Surplus City in California.

All parts purchased are for an M38, perfect match for the CJ-3B. I replaced most brake parts and external engine parts. The engine itself is in great condition. I also put on the side steps. 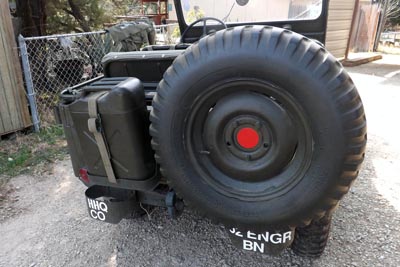 The spare tire had been mounted on the side like most CJ-3Bs. The tires were original with a military stamp on them. I purchased new tires, but the spare is from the original set. I also purchased an NOS tire mount, and mounted the tire on the rear.

I installed the two bumperettes and the pintle hitch on the rear. The holes were already there -- no drilling. The original military gas can and holder were from a surplus store. 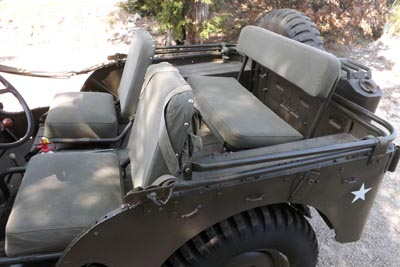 When I bought the Jeep, there were two front seats with grey seat covers. No back seat. The back seat I found was for a later model so I modified it to look like an M38. 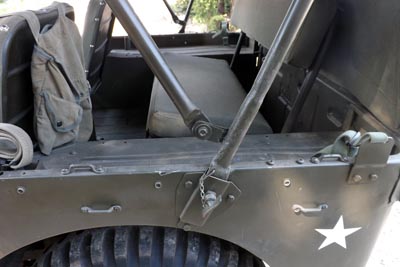 I purchased the bow brackets plus the shovel and axe brackets (160K JPEG) off eBay. The bows I made myself from a diagram off the internet. 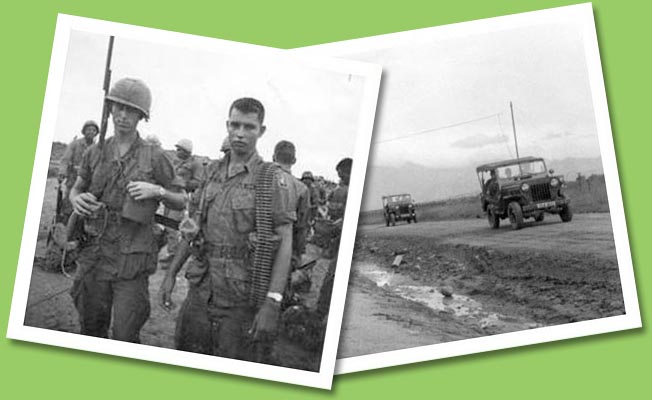 I'm the one without the helmet. In June 1965 we pulled perimeter guard while a Special Forces camp was rebuilt after a large-scale Viet Cong attack. I saw a high-hood Jeep, and the three soldiers in it were Specials Forces sergeants. I don't recall any markings on the Jeep but it was painted OD. At the time I thought a Jeep is a Jeep, but I remember how much different it looked compared to a MUTT. 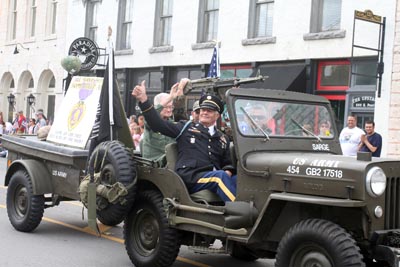 This photo is the Memorial Day parade in Granbury in 2013. That's me thumbs up. I was wounded 12 January 1966 while on Operation Crimp in the Ho Bo Woods. My right hand and fingers were almost torn off when an IED went off under me. Lots of shapnel. I did make a full recovery and finished my full tour.

The M-100 trailer I picked up in Colorado Springs while visiting my daughter. It was in terrible shape but my son and I did a full restoration. 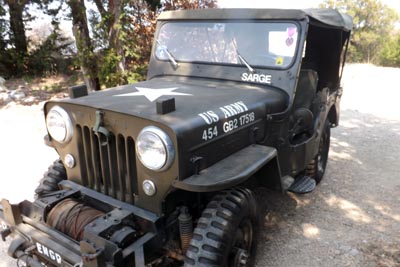 I restored the Jeep to my liking. After I finished, I also saw the CJ3B-J4A model from Gun Truck Studios. Wow, so much alike. -- Johnnie Peoples

Thanks to Johnnie for most of the photos on this page. All of his Vietnam photos are in the Johnnie Peoples Collection at the Virtual Vietnam Archive, at Texas Tech University. Thanks also to the Elwin C. Vanderland Collection in the VVA for the photo of Jeeps on a road in Vietnam, exact date and location unknown. -- Derek Redmond

If you like the idea of cloning a military Jeep, see more examples at the bottom of CJ-3B and M606 Military Jeeps.