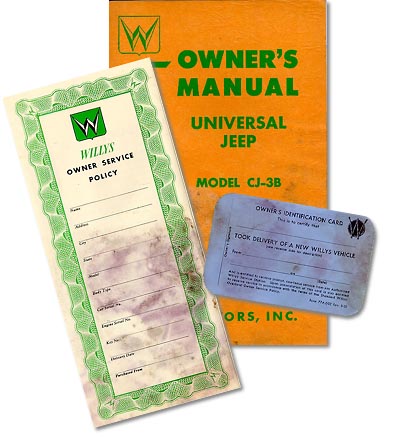 Here's the owner's literature which came with the purchase of a CJ-3B in 1953:

The Owner's Manual was a 77-page maintenance guide including a number of the same Parts Illustrations found in the CJ-3B Parts List and Jeep Universal Service Manual.

The Service Policy describes a 90-day / 4000-mile parts and labor warranty which covers "any original equipment, with the exception of tires." The Policy provides for free inspections every 30 days or 1000 miles "throughout the life of the vehicle," at "any Authorized Willys Service Station in the United States, providing such inspection or testing requires no dismantling of parts." 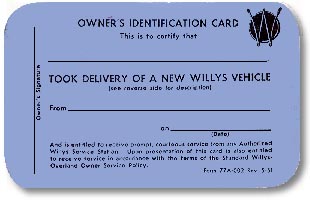 The Service Policy also suggests that "it will be of assistance to the Owner if he will carry the Owner Identification Card with him at all times, to facilitate his obtaining the services offered under this policy."

The 1951 revision of the card still included the "W-O" logo which was phased out as "Willys-Overland" was replaced with the "Willys Motors" name. 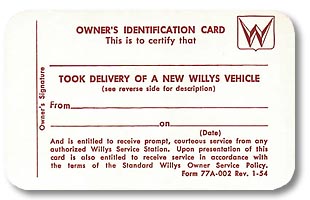 Kaiser's 1954 revision of the card included the new and short-lived Willys "W" logo.

See also the back of the card (40K JPEG) which asks owners to enter their serial and engine numbers, horsepower, ignition key, door key and gas tank key numbers.

The 1956 Service Policy seen here, no longer mentions the Owner Identification Card, and simply states that "This policy should be kept in the vehicle at all times."It also includes only one free service coupon, rather than the 1000-mile and 2000-mile coupons in the 1952 Service Policy (200K JPEG).

See the details of the 1000-mile Inspection and Maintenance Suggestions (200K JPEG) found on the reverse side of the 1956 Service Policy sheet. The inspection was free except "owner to pay for engine oil, anti-freeze and lubrication."

For Jeep owners who wanted to do their own repairs, an order form (100K JPEG) for various Mechanic's Manuals (40K JPEG) was included with the Owner's Manual. 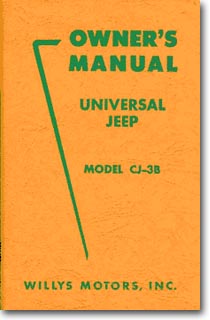 The 1957 Owner's Manual cover was similar in design to the earlier edition, but without the Willys "W" logo in the top corner. It was now identified on the title page as "Second Edition, Form SOM 1010, Copyright 1957".

1957 Instruments and Vehicle Controls (70K GIF) with the new instrument cluster and a ventilating windshield. Early-style seats are still shown. The normal information plate on the dash is missing, replaced by a small plate showing only the shift pattern.

1957 Chassis and Lubrication Chart (100K GIF) -- similar in all editions of the Manual, except the PTO and governor were not included in the later version. 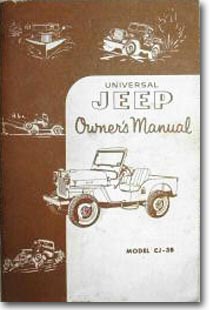 By 1959 the Owner's Manual cover had an all-new design, designated Form OM-1010-R1, or Revision 1. It was expanded slightly, to 80 pages. A larger copy of the cover (100K JPEG) shows the Jeep operating machinery including a plow and a posthole digger.

Can anyone identify dates and revision numbers from other editions of the Manual? 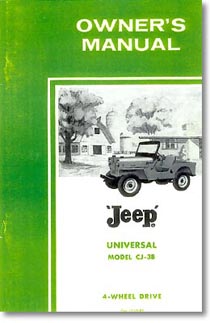 The 1963 edition was Form OM-1010-R5, or revision 5. It was 93 pages long, with the addition of a mini-catalogue of "'Jeep' Approved Special Equipment" including Meyer snowplows, Koenig and Ramsey winches, Auburn trenchers, Canfield wreckers, Ottawa backhoes, and hard and soft tops.

Reprints of Parts, Service and Owner's Manuals are available from Original Reproductions.