Facts about the Universal Jeep for Service Stations (Willys publication WO-1258) was one of several similar folding brochures issued in 1953 to promote the new CJ-3B.

The outside of the brochures included the following description of the F-head engine:

"The 72-horsepower Hurricane F-head Engine brings a 20% increase in power to the Universal 'Jeep'. The Hurricane F-head is one of the most efficient and economical automotive engines ever developed.

"The F-head Hurricane Engine is remarkably free from spark knock and valve mechanisms are quiet. It is a quick starting engine and fast to warm-up. Regular grades of gasoline are entirely satisfactory for top performance and service with the Hurricane F-head Engine."

The outside of the brochures also included a summary of specifications of the CJ-3B.

The inside of the brochure (right) was devoted to selling the CJ-3B as a service vehicle, with photos and text demonstrating the Universal Jeep's abilities in plowing snow, pushing automobiles, and powering auxiliary equipment such as an air compressor. The air pump photo appears to be a photo of a CJ-2A retouched to look like a high-hood 3B; in the brochure, the licence plate can be seen to be a 1947 Ohio tag. See a larger reproduction (200K JPEG.)

Other folders in the series, such as Facts about the Universal Jeep for Off the Road Operation (140K JPEG), used most of the same text and illustrations, with some different photographs and text on the inside, related to the specific title.

Thanks to Keith Buckley for scanning the brochure, and to Gary Keating for finding the version below with a different front picture. -- Derek Redmond 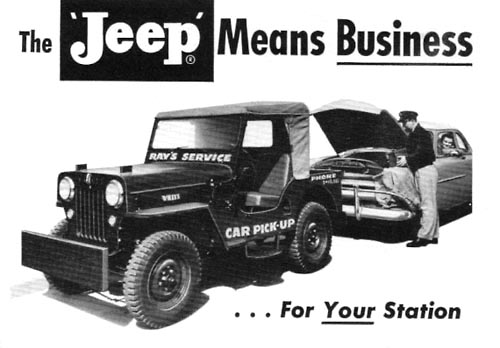