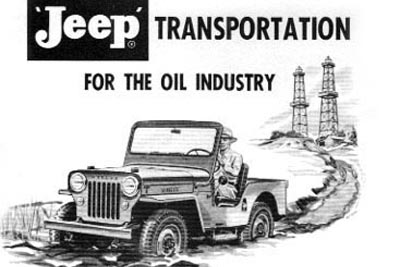 This single sheet folded in thirds, probably dating from 1953, is another in the series of similar black-on-white brochures which included Facts about the Universal Jeep for Service Stations. Aimed at a specific industry, KW-1703 was probably not distributed as widely or in the same numbers as some of the other examples, so it is not seen as often today.

Another feature which makes this an interesting item, is the juxtaposition of the two largest illustrations: one is a photo of an actual CJ-3B, and the other is one of the "fantasy" 3B's created by Willys artists. (For more examples, see Kaiser-Willys Brochures 1705 and 1763 and the Vehicle of Ten Thousand Abilities postcard.) I have speculated elsewhere about the origins of these drawings showing a hood line somewhere between that of a CJ-3A and CJ-3B, but it is particularly unusual to see one here side-by-side (actually front-to-back on the sheet) with an accurate photo.
The outside of the brochure (120K JPEG) has the standard information about the Hurricane engine, and specifications of the CJ-3B. The inside (see below) has the standard large photo and text about the Universal Jeep. It also has three small photos with captions tailored specifically to the oil industry, suggesting using the Jeep to "take your pipe line across country 'as the crow flies'...." and for "frequent checking of remotely located wells and pumping stations...." 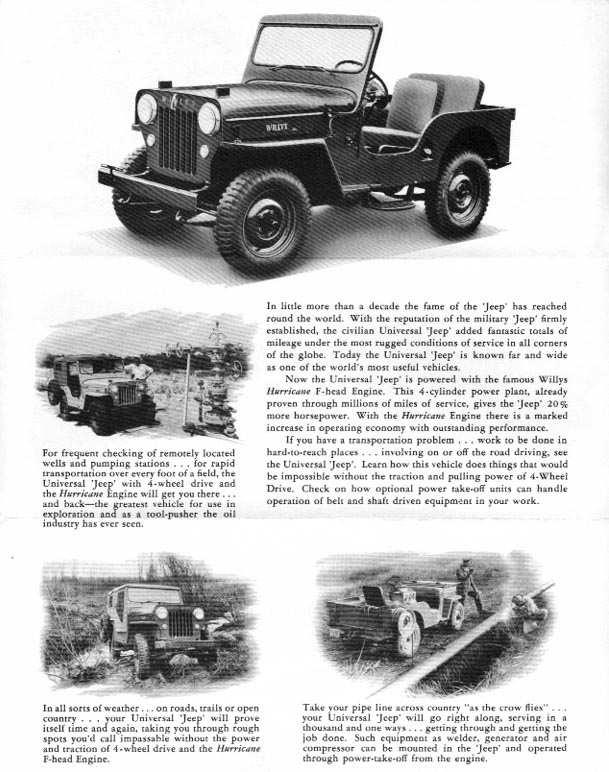 Thanks to Gary Keating for scanning the brochure. -- Derek Redmond