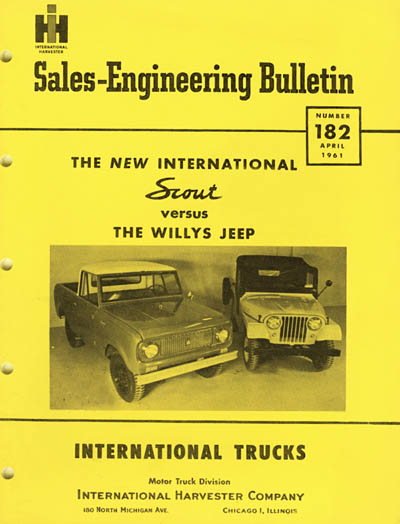 By 1961, the Willys quarter-ton Jeep had serious competition in many places around the world -- in particular, the Series II Land Rover in Europe and the Toyota Land Cruiser in Japan. But in North America, the first real challenge came that year from the truck division of International Harvester (IH). The 1961 International Scout was a capable 4x4 (also available in 2WD) that looked more like a little fleetside pickup than it did like a Jeep.

Willys recognized the challenge, and quickly published the pamphlet A Few Facts For the Record... on Jeep versus Scout. This was followed by a larger brochure from Willys' export division, called Jeep vs. Scout: "Confidential".

For its part, IH issued Sales-Engineering Bulletin Number 182: The New International Scout versus the Willys Jeep, a 40-page booklet designed to help its sales staff demonstrate the Scout's advantages. Here are some selected pages from that April 1961 bulletin. 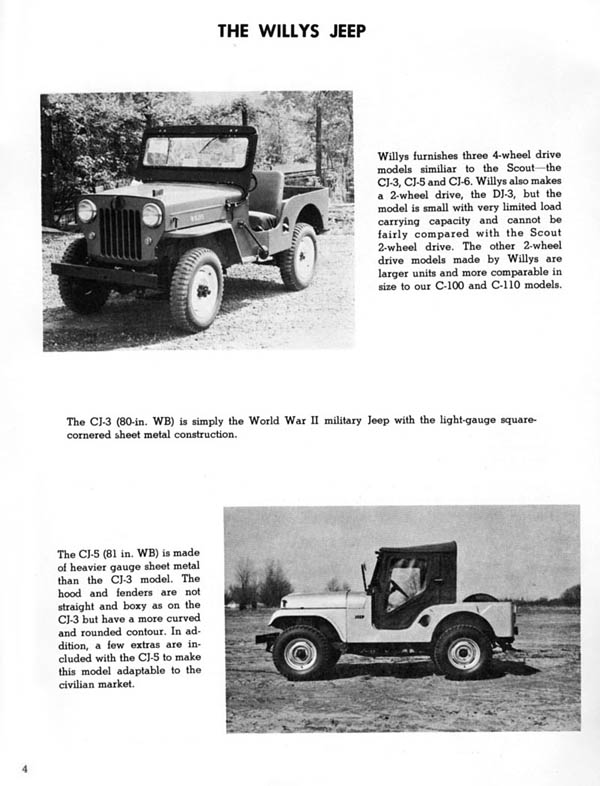 The booklet opens by introducing the competition. The CJ-3B, pinnacle of flatfender Jeep development, is immediately dismissed: "The CJ-3 (80-in. wheelbase) is simply the World War II military Jeep with the light-gauge square-cornered sheet metal construction." (And a droopy rear-view mirror.)

Most of the photos and direct comparisons in Bulletin 182 refer to the CJ-6, which in size is the most similar to the Scout, but many of the points apply to all three of the Universal Jeeps (CJ-3B, CJ-5 and CJ-6.) 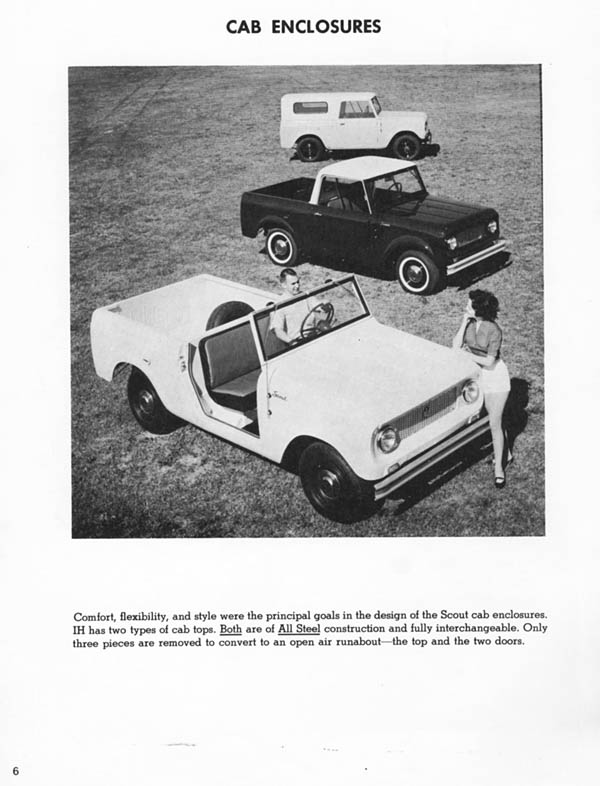 The poor Willys who can't get his mirror up, is followed by this photo of the Scout as sex symbol.

This page also introduces the words "comfort, flexibility, and style," which summarize a good deal of the information in this booklet. 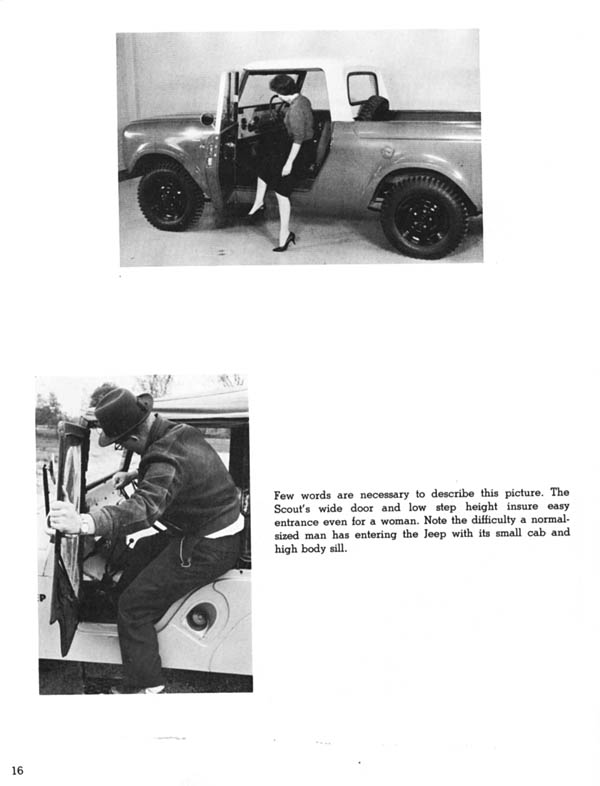 Nearly half of the 40 pages are concerned with the advantages of the Scout's cab, roof and doors. This means there are a lot of doorway photos, but it's pretty hard to argue with the point made by these two. 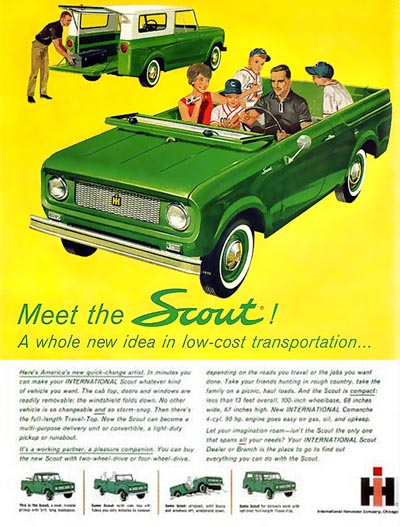 Although Bulletin 182 is a fairly simple, black & white publication for distribution to IH salespeople, the company also accompanied the launch of the Scout with a big, colorful advertising campaign. This helped the Scout sell very well for an upstart vehicle taking on the Jeeps, well established in their market niche.

As Jim Allen says in his Four Wheeler article 1962 International Harvester Scout 80, the relatively small automaker "managed to hit a bases-loaded home run that took the sport utility species many steps up the evolutionary ladder. Scout was the direct inspiration for several other SUVs, including the Ford Bronco and Jeep Jeepster Commando of 1966 and the Blazer of 1969." 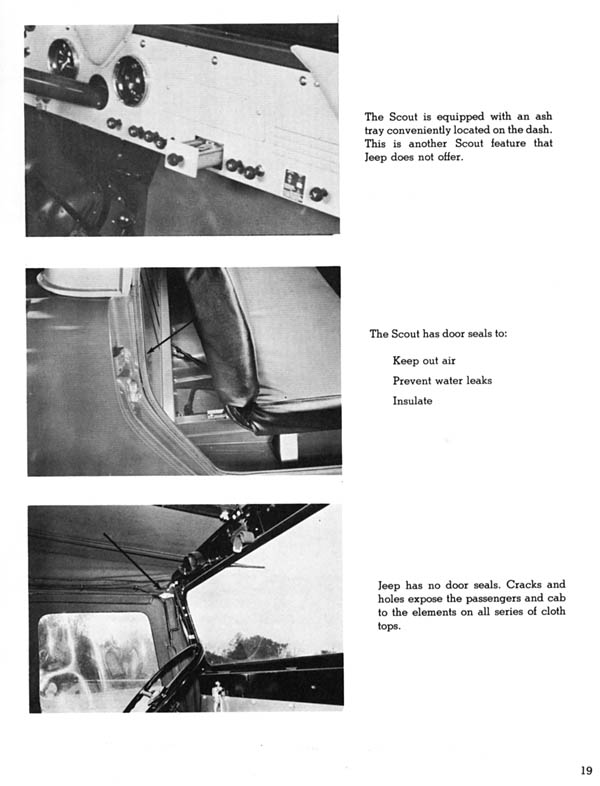 The photo showing that the Scout's dashboard features an ashtray, was pointed out by Willys to its sales staff, as an example of IH boasting about frills rather than vital points like payload, axle strength and maneuverability. 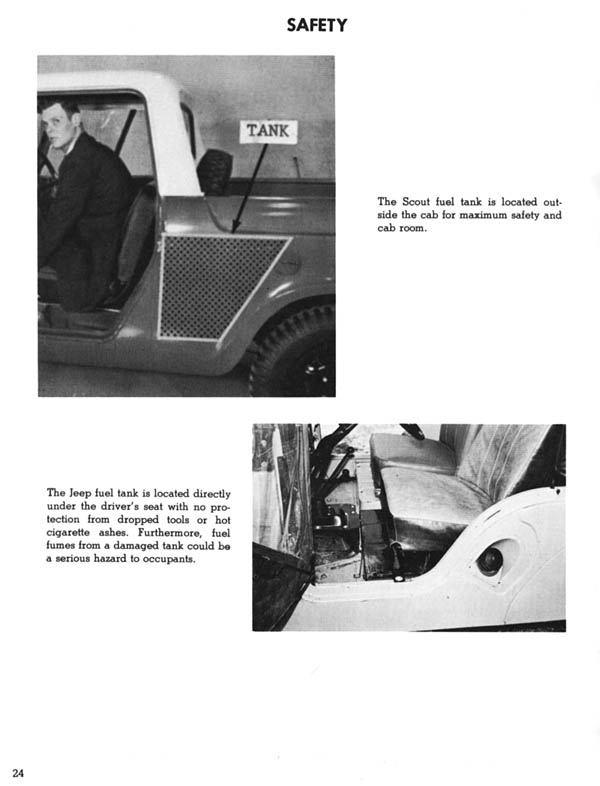 The Jeep's lack of an ashtray becomes a safety concern when IH mentions the possibility of hot cigarette ashes being dropped on the gas tank under the driver's seat. The Scout is safe from that danger, with the tank being located inside the rear wheelhouse. 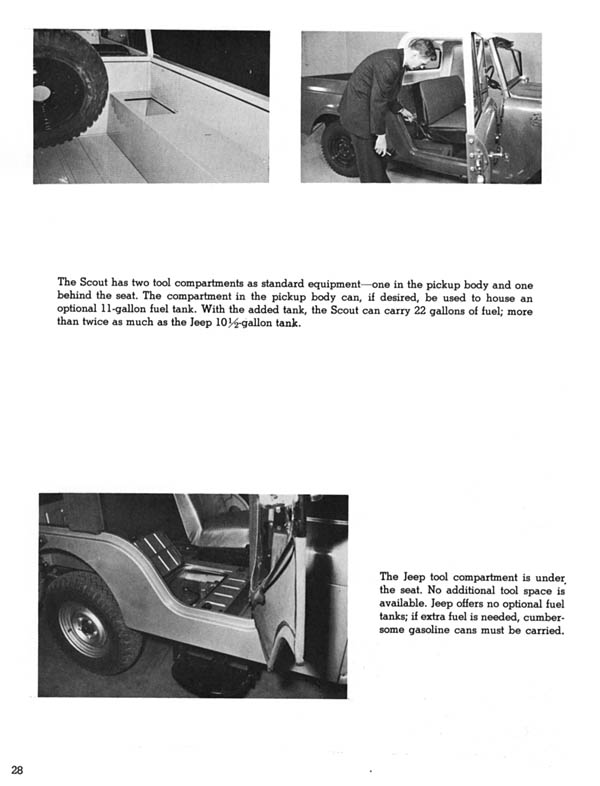 And an optional second gas tank can go in the toolbox at the rear of the wheelhouse compartment. There is also a small toolbox behind the adjustable passenger seat. 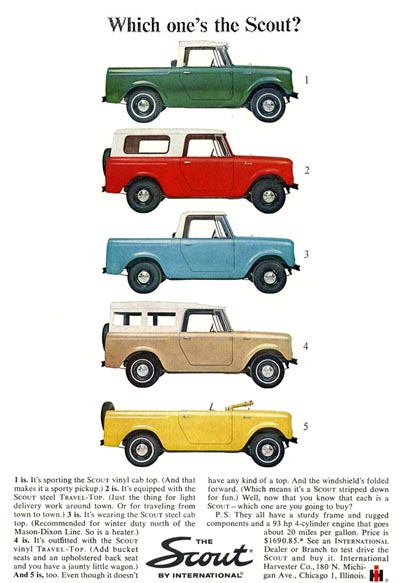 The Scout was available with short and long folding vinyl tops as well as steel cabs. Clearly lots of people were interested in the soft tops, and by 1962 they were featured prominently in this ad. 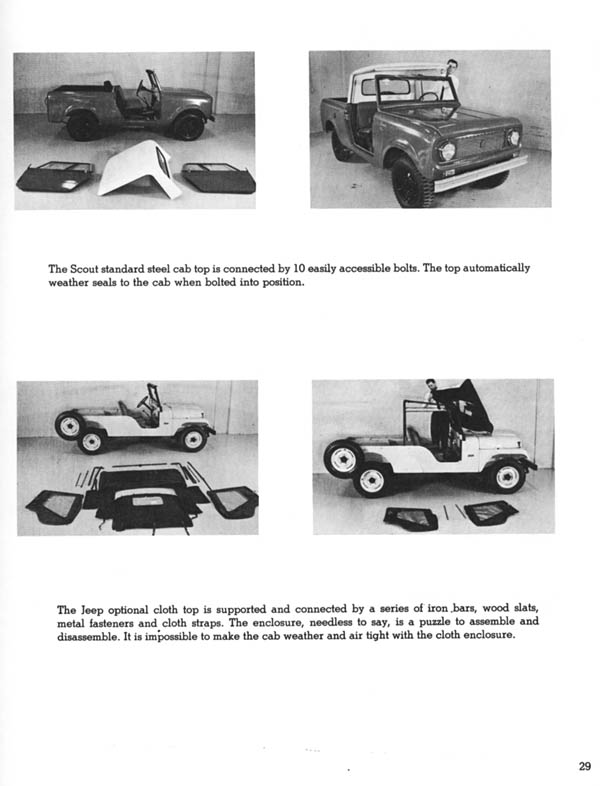 Bulletin 182, however, doesn't say much about the vinyl tops, while spending several pages comparing the simplicity and weathertightness of the standard steel cab, to the Jeep's "cloth" top.

Steel cabs for the Jeep are mentioned briefly as being a pricey aftermarket option, and probably IH didn't want to invest the time or money to install one for the purpose of photographing it. But it might have been worthwhile -- it certainly would have demonstrated that a hardtop Jeep was not particularly stylish. Willys actually demonstrated that pretty well in its own publication Jeep vs. Scout: "Confidential". 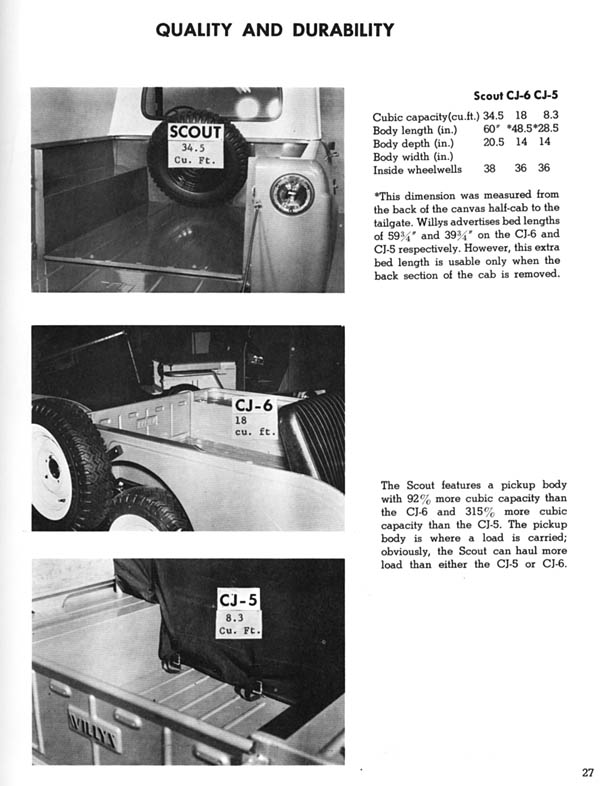 The larger size of the Scout, including a deeper bed, gives it a larger cargo capacity, but you have to refer to GVW in the Vehicle Specifications at the end of the booklet, to find that the Jeeps are in fact rated for a heavier payload. 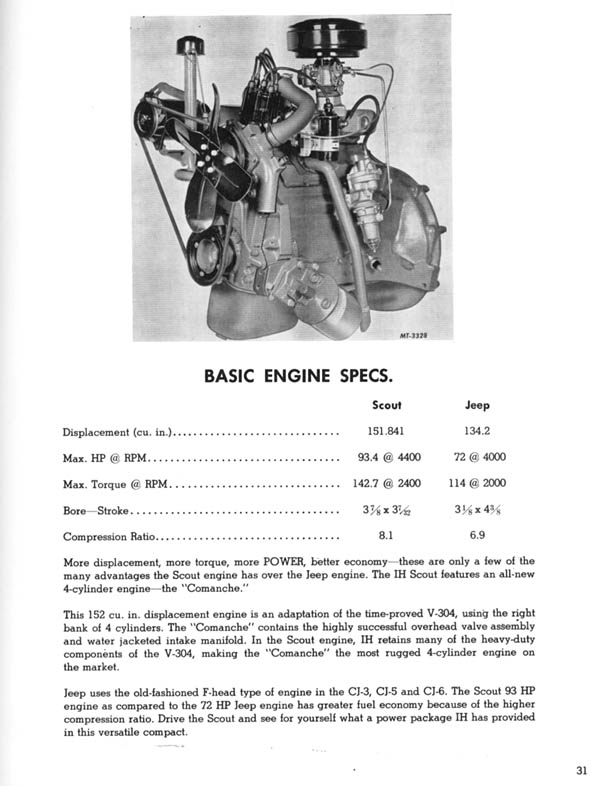 The "Comanche" engine in the Scout was larger and more powerful than the F-head used in all the Jeeps, although some of that horsepower advantage was offset by the Scout's 3,000-pound weight. And although the Willys F-head is referred to here as "old-fashioned", it was reportedly originally considered for use in the Scout, before it was nixed by the IH brass.

Jim Allen describes how the Comanche was born, in Four Wheeler: "When the Scout project started, IH went looking for a four-cylinder engine because the company had nothing suitable in-house. In the midst of the search, the powertrain department had the idea to do a 'bank-ectomy' and lop the left bank from the IH 304ci industrial V-8. Voila, instant four-banger." 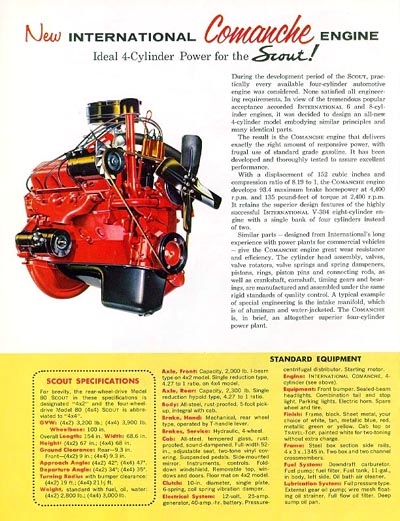 The drivetrain behind the Comanche was pretty much the same as in the Jeep, except that the Scout used two Dana 27 axles, while the Jeep had a heavier Dana 44 in the rear. The Scout, however, boasted a larger clutch, and soon added the Dana 44 rear end as an option. 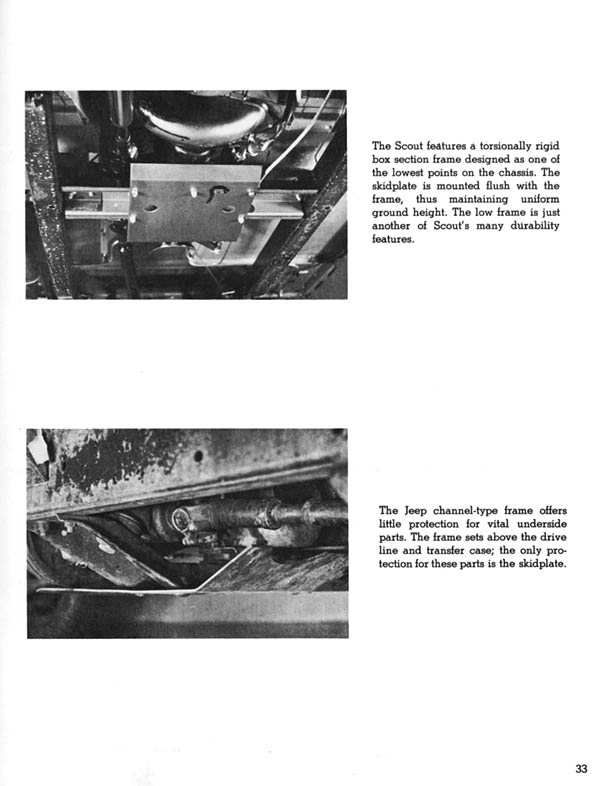 This quick look at the chassis of both vehicles summarizes a long-standing debate in the 4x4 world: the merits of a heavy, rigid frame versus the Jeep's higher, more flexible frame. 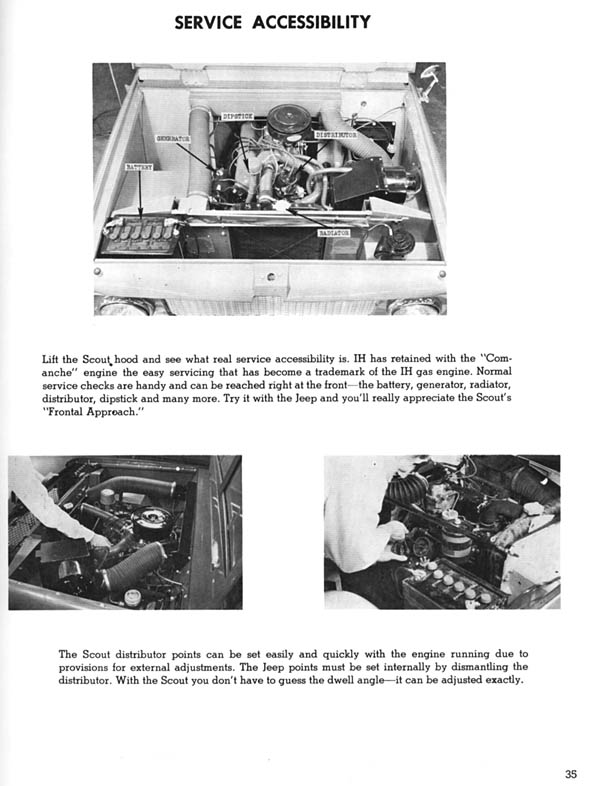 I can see many Jeep owners saying, "Well, yeah, that would be kind of nice," when looking at the handy location of the brake reservoir and a few other important things under the Scout's hood (which is latched at the front and has a support rod to hold it open!) 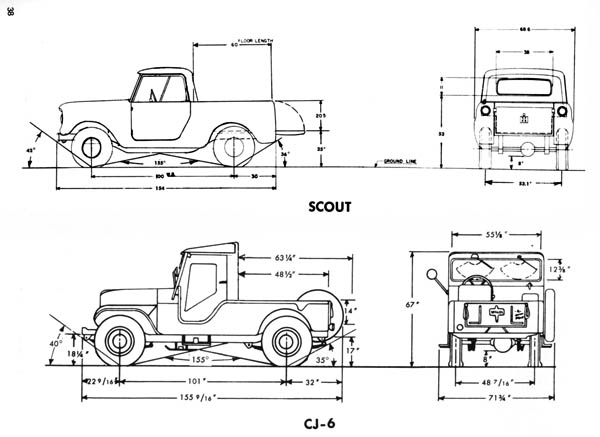 At the end of Bulletin 182, it's a nice idea to include drawings and dimensions of the vehicles, with a list of other specs (70K JPEG). But a quick comparison of the drawings is made impossible by the fact that the Scout and Jeep are at different scales -- the Scout actually appears significantly smaller than the CJ-6, rather than approximately the same length. 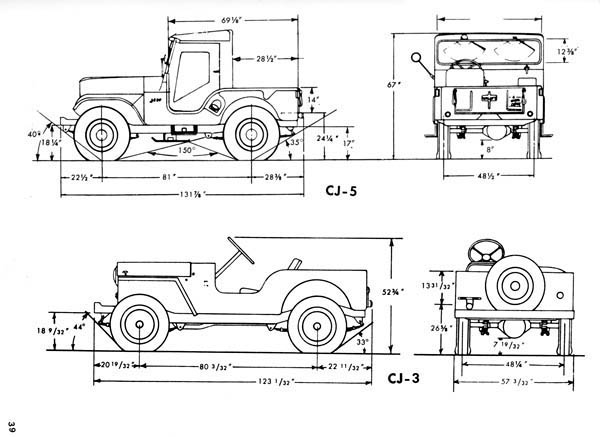 Here the CJ-5 appears to be about the same size as the Scout, and the "CJ-3" in its first appearance since page 4, is shown at an even larger scale, so that it looks like the biggest of the bunch. The "CJ-3" has also lost its droopy mirror altogether, along with its windshield.

Possibly IH removed the windshield because, in fact, the drawing shows a CJ-3A, a vehicle which had been out of production for nearly a decade by 1961. But if you're style-conscious, you probably think it's really just a World War II jeep anyway.


The Scout remained in production for 10 years, folllowed by the similar Scout II until 1980. Over half a million Scouts were sold, which was more than the combined total sales of the CJ-3B, CJ-5, CJ-6 and CJ-7 during those two decades.

Thanks to Jim Allen for scanning Bulletin 182. In addition to his Jeep books, Jim is the author of the International Scout Encyclopedia, which is packed with great photos and every detail on the Scout. -- Derek Redmond

The August 1961 issue of Jeep Merchandiser, aimed at Jeep salesmen, commented in some detail on Bulletin 182. See the Willys response in A Few Facts For the Record on CJ3B.info.