In the late summer and fall of 1954, Willys Motors went on the road in the western United States with a travelling demonstration of many of their special-purpose vehicles. The event reflected Kaiser-Willys' continued focus on selling four-wheel-drive vehicles for work, not play. As Patrick Foster puts it in his Standard Catalog of Jeeps: "Apparently the idea of vast numbers of people buying a Jeep as an alternative to the family car hadn't occurred to anyone."

The roadshow was referred to as the "Cavalcade of Jeeps", a name which Willys-Overland had been using since 1947 for a demonstration of the range of Jeeps. It must have been impressive to see all of these specially-equipped vehicles together in one place.

The little ad below, from the Fresno Bee in California, promises an ambulance, fire engine, wrecker, trench digger, post hole digger, plow, dozer, welder, generator and dump truck in action. A larger ad, typically placed in newspapers the day before the Cavalcade arrived in town, included the sketches of Jeeps at work seen here on the left.

The new model CJ-5 was just appearing in 1954, so it's possible that a lot of people got their first glimpse of the CJ of the future in the Cavalcade. But many of the vehicles demonstrated were likely built on the CJ-3B chassis which was still being produced in large numbers. The drawings included in the ad are all flatfenders in familiar poses. They are probably all based on Willys promotional photos, some of them certainly photos of earlier Universal Jeep models.

The drawing of a Jeep pushing an automobile is based on a photo found in the brochure Facts about the Universal Jeep for Service Stations (200K JPEG) which appears to be a retouched CJ-3A.

Below that is obviously a high-hood CJ-3B, although it's not clear what's in the rear of the Jeep. The bottom drawing of a belt-driven rotary saw probably originated as a CJ-2A photo, as this function was more commonly illustrated in early Universal Jeep ads.

The complete advertisement is seen on the right as it appeared in the Nevada State Journal when the Cavalcade arrived in Reno in October 1954. The ad promises, "You'll see the versatile 'Jeep' perform operations that must be seen to be believed! See dozens of ideas presented that you can use profitably in your business. Tips for saving time, trouble and money. Nearly two hours of show... interesting, entertaining and educational."

Despite solid sales of about $213 million that year, Willys was in the red as a result of the Kaiser purchase and corporate reorganization. So they were working hard to attract attention and enlarge their dealer network.

See also the same advertisement in the Fresno Bee (100K GIF) on 25 August, on the page with all the ads for what was playing at the movies, including John Wayne in the now almost-forgotten airplane disaster film The High and the Mighty. Opening Friday was On the Waterfront with Marlon Brando. 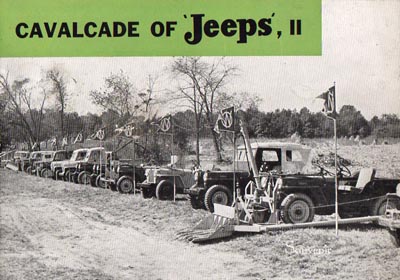 Gary Keating's collection includes a "Souvenir" booklet showing the second Cavalcade, a one-day event held on 20 October 1948 at the O'Donnell farm in Prince George's County, Maryland. The cover shows a pretty impressive lineup of Jeeps and equipment for 1948.

See also the second page, with more photos of the crowd (120K JPEG). Mostly men in fedoras and overcoats or occasional military uniforms, except for at least one gentleman who appears to be from India -- perhaps one of the Mahindra brothers?

Also on CJ3B.info, see some drawings of Fire Jeeps from this booklet.

There must be some more photos of the later Cavalcades in an archive somewhere. Unfortunately I haven't seen any, with the exception of the newspaper picture below, published in the Humboldt Standard a few days after the Cavalcade visited Frank Dearing's Willys dealership in Eureka (Humboldt County, California) in September 1954.

Frank Hile of Kaiser-Willys is seen at the controls of a quarter-yard backhoe attached to the rear of a Jeep. Luckily he's wearing his natty bow tie, since the picture appears next to that of the newly chosen Miss America for 1955.

Thanks to Bruce Agan and NewspaperArchive.com for help in finding these clippings. I would be interested to hear if anybody has any photos of the Cavalcade. -- Derek Redmond