See also Page 2 of our coverage of the Rally. 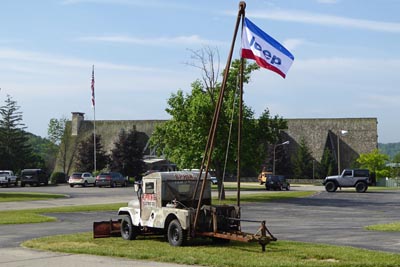 The Hueston Woods Lodge is an out-of-the-way location, tucked into the middle of a state park in southwesterrn Ohio, but we knew we had found it Thursday evening, when we saw the Jeep flag flying from the "Spring Electric" pole line Jeep. (Rick and Paulette Riley's early CJ-6, in its cool original patina, has a posthole digger and a derrick which allows the winch to lift and plant poles.) 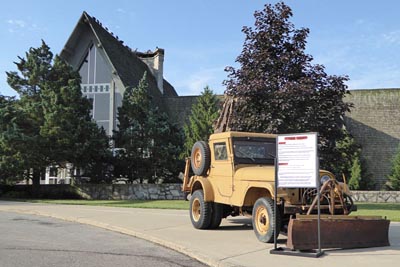 For years now, the lodge has been the site of the annual Willys Jeep Rally. Beckoning us to the main entrance was a Go-For-Digger trencher Jeep. 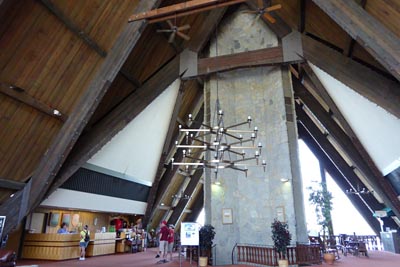 The lobby itself was very impressive -- the lodge is one of the world's largest A-frame buildings. 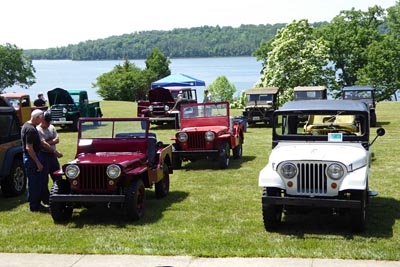 We woke up Friday morning to see, right outside our balcony, the beautiful lawn leading down to the lake was filling up with Willys vehicles. 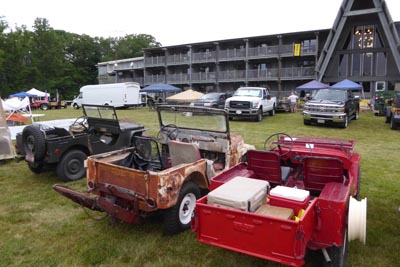 A feature of the Willys Jeep Rally is its focus on Jeep accessories and special equipment, and that was immediately evident. 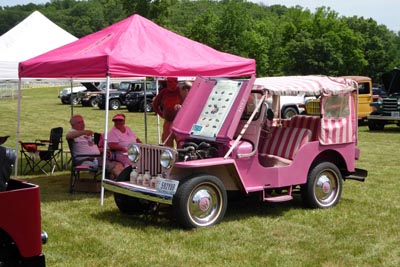 Of course the pink-on-pink of Carol Mowbry's "Candy Clipper II" is an eye-grabber at any Jeep show. 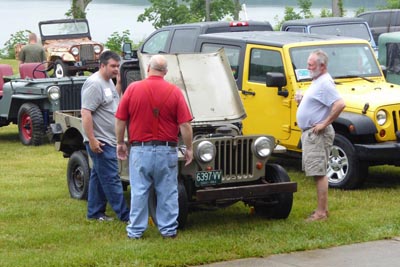 But Carol's Surrey was not the only interesting DJ-3A at the Rally this year. Jason Phillips was showing his recently-acquired 1964 Dispatcher, with original 13-inch wheels. 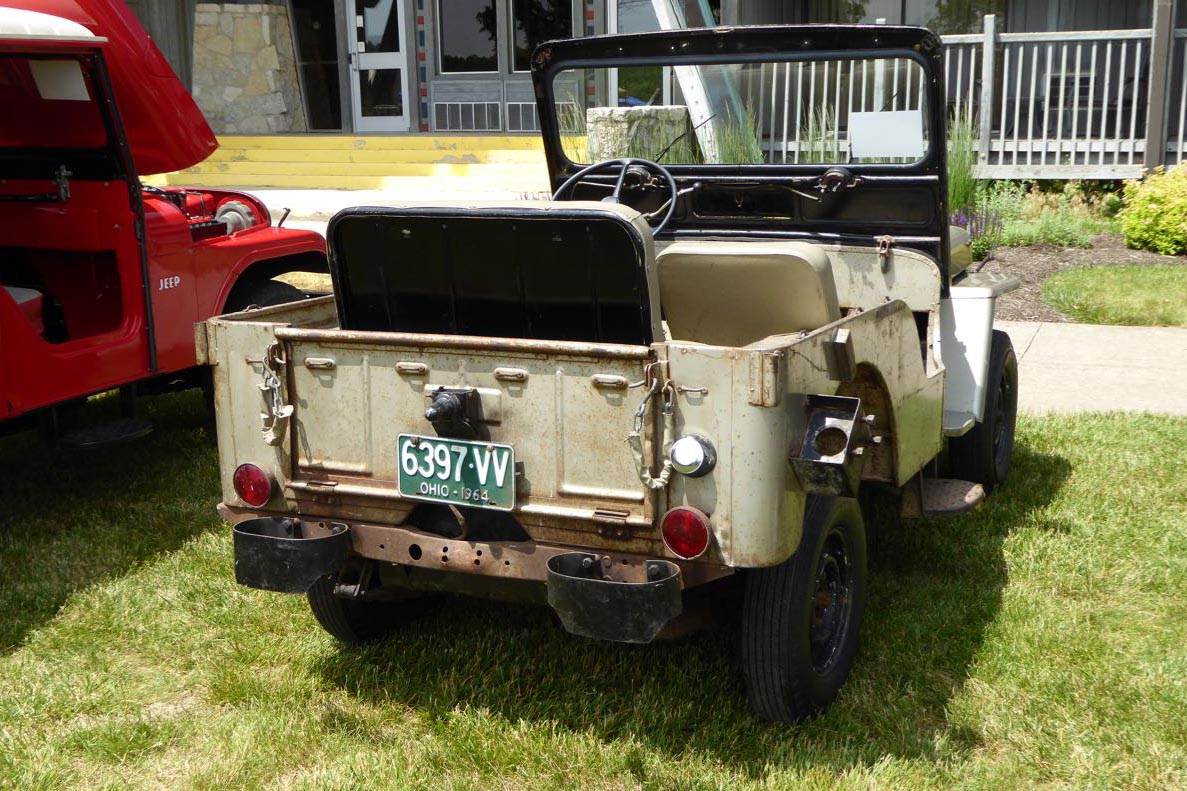 The DJ's soft top was long-gone, but it still had its original air cleaner (170K JPEG) and factory paint with paint and trim tag (110K JPEG) and intact "Jeep Dispatcher" decal (140K JPEG) on the cowl. 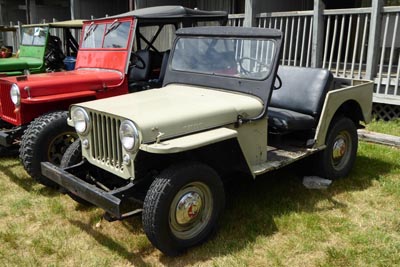 A few steps away was Rick Riley's former U.S. Navy Dispatcher, with the large door openings for a sliding-door hardtop. 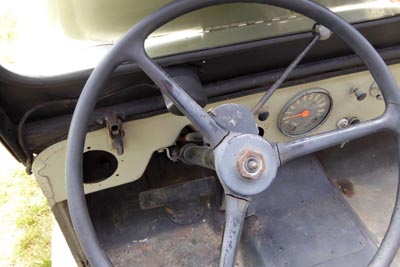 What really caused the double-takes on this DJ, was the column-mounted shift of the Borg-Warner automatic transmission, and the one-piece brake and clutch pedal. The clutch side simply pivots, with no linkage. 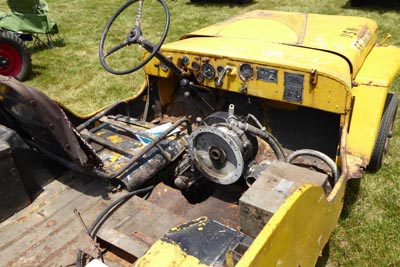 Speaking of Navy Jeeps, another unusual one is this mobile Auxiliary Power Unit (APU) for firing up airplanes. I believe this CJ-3A converted by Valentine Welder & Manufacturing (180K JPEG) in Detroit was a predecessor to the three-wheel version built by Szekely & Associates in Philadelphia (see Hurricane Engine in a Low-Hood Jeep on CJ3B.info.) 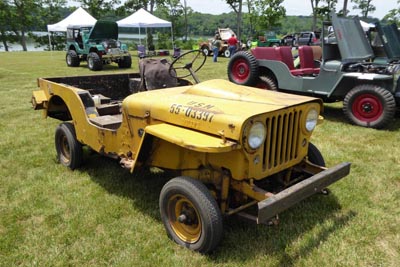 For some reason this F-head powered (300K JPEG) APU has 12-inch wheels, possibly to provide low clearance for use on carriers and under aircraft. This Jeep was discovered in storage by Nicholas Oxender. A detail that caused some head-scratching was an assembly on the gas tank (170K JPEG), above the sending unit. Maybe a spark arrestor? 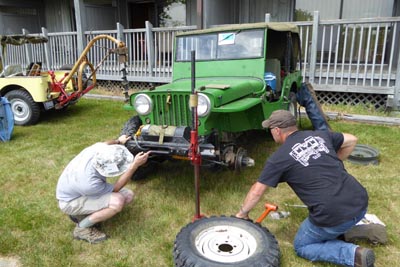 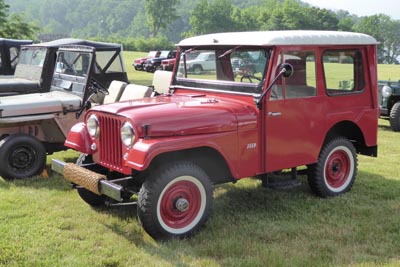 This early CJ-5 from Michigan was stunning with its original sliding-door hardtop. 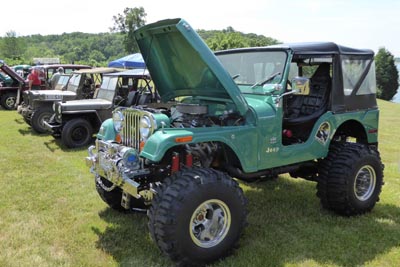 One great aspect of a Jeep show is how different two Jeeps of the same model can be. This later V8 CJ-5 is lifted and loaded with every chrome accesory you can imagine. Unfortunately I didn't get the names of the two CJ-5 owners. 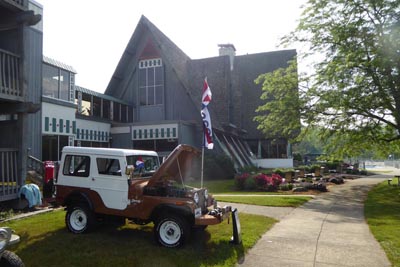 But this one belongs to Pete Dunkel, one of the Willys Jeep Rally organizers. 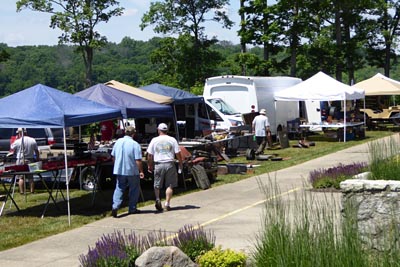 The handful of parts vendors on hand were busy all day Friday. 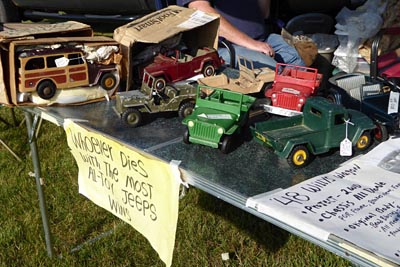 Toy Jeeps for sale included a selection of Al-Toys on Glenn Byron's table, with prices to match the rarity of these 1950s classics. For more casual toy buyers, Paulette Riley had a huge array of recent Matchbox-size Jeeps (250K JPEG). 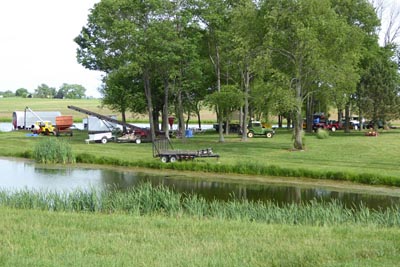 The Rally provided a fun, open-air shuttle for the ten-minute ride over to John Ittel's farm, where his collection of Jeeps with farm equipment was being demonstrated. 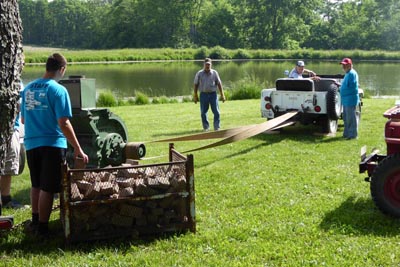 In a great example of Jeep versatility, the rear PTO on John's CJ-5 was powering a Wisconsin Pulverizer (170K JPEG) rock crusher. 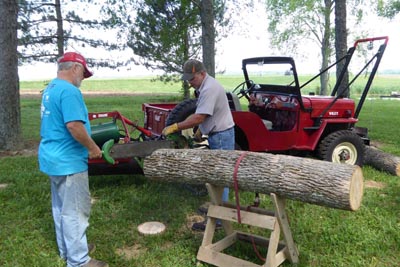 Rick Riley and Joe Wolf operated the Von Ruden hydraulic-powered chainsaw. It was running off the rear PTO of John's 1954 CJ-3B, which also has a set of Braden "gin poles" for lifting. The gin poles require brackets mounted on the fenders (150K JPEG) 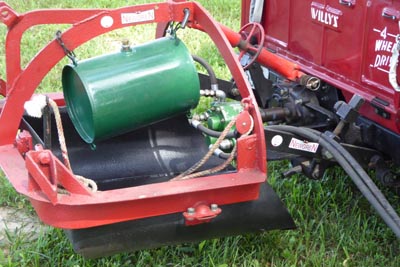 Hanging on the Newgren scoop is the hydraulic reservoir for the pump powering the chainsaw. 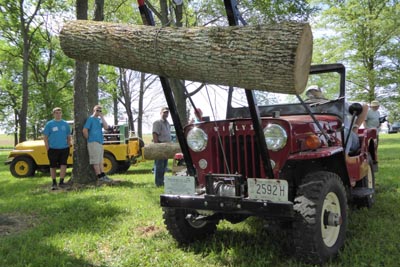 The Braden gin poles, manufactured in Oklahoma, turn a winch into a hoist. It's not clear what maximum weight they can handle -- an old Braden Gin Poles brochure (170K JPEG) lists only the rated capacity for their Model J22 winch (230K JPEG). 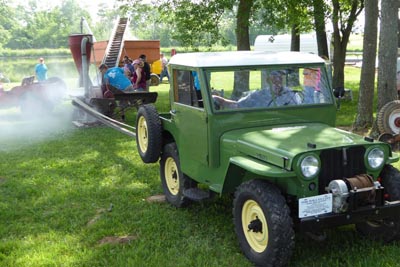 Both the red 3B and this '46 2A have Koenig crankshaft-driven winches. Coming soon on CJ3B.info is a close look at both these winches, one of which can be activated from the cab. The CJ-2A is seen here powering John's hammer mill. 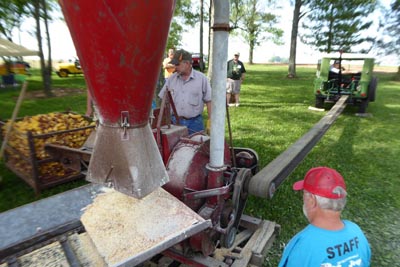 The McCormick-Deering hammer mill grinds corn for animal feed. See more photos of this operation during last year's Rally, in Universal Farming in Ohio on CJ3B.info. 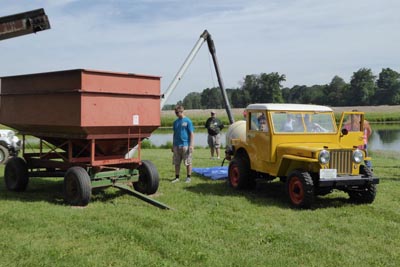 Another '46 CJ-2A was busy turning a mixer on its Monroe rear lift, while a hydraulic auger lifted the corn from a hopper into the mixer. 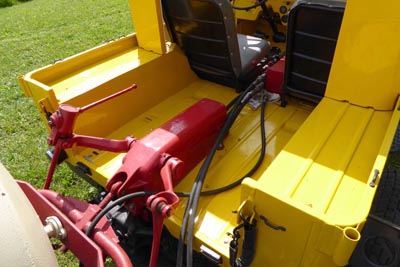 The auger was powered by a center-mounted hydraulic pump on the same Jeep. 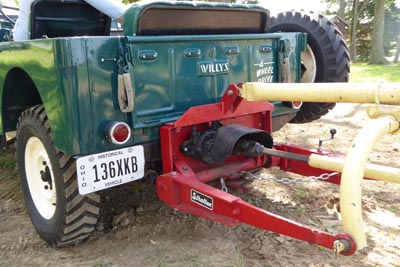 The Stratton 3-point hitch under John's 1953 CJ-3B allows the back seat to stay in place, in contrast to the Monroe hitch which takes up much of the rear cargo space. 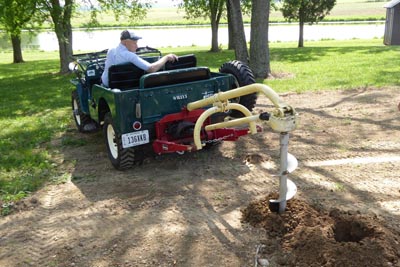 John drilled a couple of post holes in no time flat.

Coming up next: the trencher in action, the arrival of the MAHL Jeep Loader, and the trail ride!