Sometimes Jeep Myths Aren't So Mythic:
The Case of the Jeep Steps 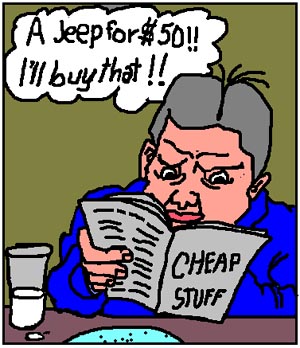 Small ads in the back of Popular Mechanics magazine starting in the late 1940's and continuing as late as the early 1970's, crowed that you could get a perfectly good surplus jeep for $50 if you would just answer the ad and get the details. How many of us mused about the $50 jeep? I guess somehow I could never make myself believe it, because I never sent for information. More than likely, as a high school student, I didn't have $50 anyway. Even now though, I wonder if anyone really got a $50 Jeep. Probably not, but does that end the myth?

Many of us remember the hundreds of unused CJ-3Bs sitting in warehouses on the East Coast a few years ago. They were really a bargain if we could only buy them in lots of several hundred. Too bad they don't really exist.... Or do they? Just because you can't see them, does that mean they don't exist?

OK, so we're all gullible. Sure we are. Haven't some of us found the proverbial "30 years in a barn" Jeep? And even if we didn't, don't we sometimes color our stories to conform to our dreams? Don't we contribute to the creation and perpetuation of Jeep myths? I know I do.

Another story approaching mythic status is the one about the barrel filled with original Willys-Overland civilian Jeep side steps located somewhere in Australia. I had first learned of this cache of side steps a few years ago on the Classic Jeep Mailing List. I was tempted to inquire at the time, but once again I didn't. The barrel of Jeep steps was on its way to becoming another Jeep myth, its origins forgotten. Did it really exist? 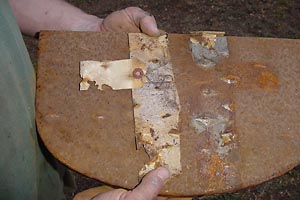 Maybe, or maybe not. A recent CJ-3B Bulletin Board discussion about civilian Jeep side steps brought the Australian steps up again. I received an e-mail from a 3B owner in Australia who had bought two of these side steps. They really do exist. They have no supporting arms or reinforcements, just the steps themselves. The buyer sent this photo of one of the steps with dealer tag still attached.

The story is that the steps were found at a former Willys dealership and that they had been in a barrel for about 40 years. They are rusty but they are quite restorable. 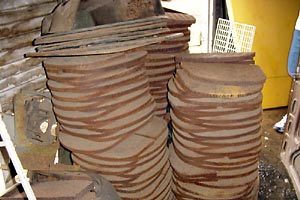 On February 3, 2003 Bruce Teterin sent this photo. He purchased all 175 pair of rusty but perfect steps without mounting brackets. He now has the world's finest collection of NOS early civilian Jeep steps. See an example of the steps after de-rusting (20K JPEG.)

In this case the steps do exist... but it probably doesn't matter. The point of a Jeep myth isn't whether it is true or not, but that it could be, might be, or might have been, true.

But where's the barrel? Maybe that's a myth... 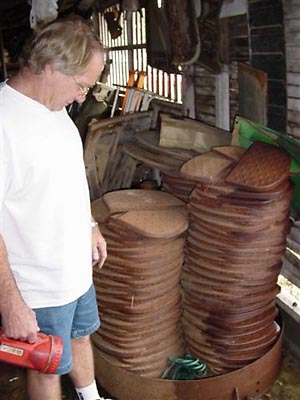 Bruce writes to say, "Just to prove right another myth, here is a pic of the Mythological Barrel with all 175 pairs of side steps. Over the years the Barrel walls have rusted away..."

And Jon Rogers fills in some of the background: "The steps were located in Maryborough, S.E. Queensland by me in about 1992 when I started restoring my '54 CJ-3B. I sent a few sets overseas at around that time, at cost plus postage. I forget the amount now, but around US$25 in total. A year or so ago I mentioned it to Bruce who was looking for some steps for his 3B, so I sent him up a set to Townsville. When he found out there were more of them, he saw the potential, and on his last trip down this way in February, I took him for a ride out to the "Gold Mine." Not only did he get the steps (all 175 sets) he also picked up heaps of other NOS parts for his CJ-5. Just a shame he took so long in getting here; all the NOS CJ-5 panels had been scrapped.

"I removed the steps from the barrel when it became obvious it was just a water trap. I guess if I had hadn't done that at the time there wouldn't be steps to get mythical about today..."

In 2017, Warren Jacobsen wrote to say, "The story about the barrel of steps is entirely correct. I worked for Jimmy White at the wrecking yard when I first left school. There was a lot of jeep parts there including brand new engine blocks, cranks, 3B grilles and all other parts. There was heaps of stuff, all from Dominion Motors sale. You know, I loaded brand new MB engine blocks onto a scrap metal truck, four dollars a ton. Jimmy was a great Jeep man, but always busy. I bought my first CJ-5 from Jimmy going 150 dollars. We used those Jeep steps as frisbees."

Thanks to Bart, Jon, Bruce and Warren for throwing some light on one of those many myths that have always made Jeep collecting more interesting. -- Derek Redmond

Remember when we thought that the CJ-4 and the CJ-1 were myths? We're still working on sorting out the myths around the OB54 Jeeps.

Also on CJ3B.info, see Mounting Jeep Steps, and a discussion about What is Truth in Restoration?