The early 1950s were heady years for Willys. Their little CJ-2As and CJ-3As had been sellling like hotcakes in the face of a market inundated with cheap, war surplus MBs. The M38 (Willys model MC), a militarized variant of the CJ-3A, was also being produced in large numbers, but Willys was already working on an improved rig for the military under the project code 6600 (see the Military CJ-4M.) This project would eventually bear fruit in the form of the M38A1 (Willys model MD) in 1952, and the CJ-5 in 1954 (for the 1955 model year).

One of the key points to the new designs was a fresh power plant -- the F-head 134 cubic inch four-cylinder. The old 60 hp "Go-Devil" flatheadhad soldiered on for better than a decade, but its power output potential was limited. The new F-head used many of the existing pieces, but moved the intake valves into a new cylinder head for better breathing. The low compression (6.9:1) variant of the new engineproduced 70 hp, while the high compression option (7.4:1) made a whopping 75 ponies. The only problem with this engine was that it was too tall for the current low-hood CJ-3A design. 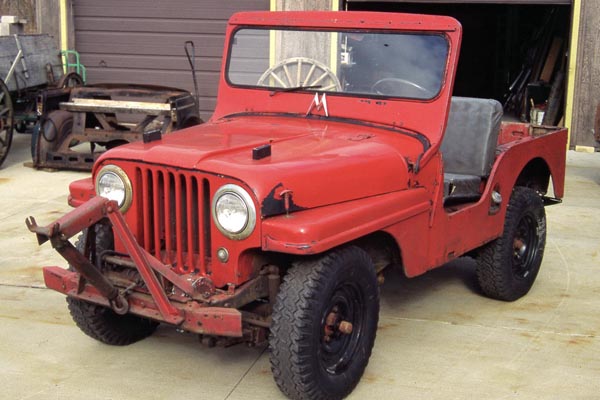 You know how the problem was solved for two production Willys models. The M38A1/CJ-5 got a curvey new body with an 81-inch wheelbase, and the CJ-3B got a "hoodectomy" that raised the hood and cowl just enough to clear the engine.

The CJ-4 prototype combined the CJ-5 look with the flat-fendered look.

Mechanically, the CJ-4 is very close to the M38A1 and later CJ-3B. And it's very likely the first Jeep to carry the new F-head four-cylinder. It shares the same 81-inch wheelbase of the MD, the engine, T-90 three-speed, Model 18 transfer case and Spicer 25 front axle of both the MD and the 3B, and a Spicer 44-2 semi-floating rear axle. The front suspension also uses the standard Jeep forward spring shackles instead of the Army version's reversed shackles. 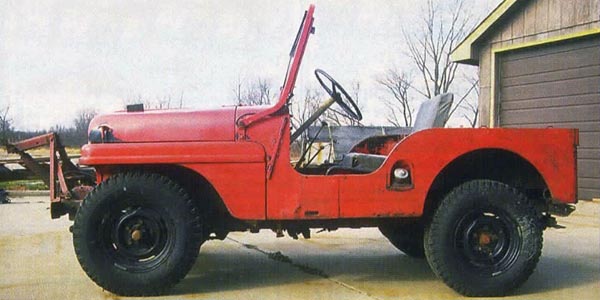 The CJ-4 body tub looks like a standard Jeep CJ-3A up to the point where it would normally neck down onto a CJ-3A narrow cowl. There, it flattens out and blends into the CJ-4's unique fenders and cowl. The "Willys" embossed into the hood is another unusual feature. The windshield is almost identical to the CJ-3B. The CJ-4 was originally painted a gloss olive green and mounted a spare on the right rear, ala the CJ of the day.

According to noted Jeep expert and Jeep House Museum Curator, Ron Symanski, the build quality is much higher than normal for a prototype. "Concept vehicles were pretty much slapped together in those days," he said. He surmises that either Willys had serious future plans for the CJ-4 and invested a little more time and money, or that it was built in Germany, where Willys had several prototypes built over the years because labor was cheaper. 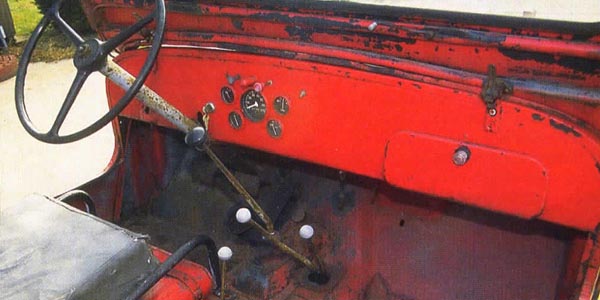 The one or two period photos (45K JPEG) of the CJ-4 that have surfaced show it with the number "X-151" painted on the bumper. In Willys code, the "X" was for experimental, the "1" for vehicle serial number 01, and the "51" signifying the year. The information may be buried somewhere, but nobody alive seems to know much about the history of this transitional rig.

The CJ-4 concept was tested and obviously rejected in favor of the other ideas. That ended the CJ-4's usefulness to the company. Most prototype vehicles end up in the scrap heap or the parts bin, however the CJ-4 escaped destruction through the efforts of the Chief Chassis Engineer at Willys/Kaiser from 1955 to 1965, Miguel Ordorica. He had enough pull to get a stay of execution for the Jeep, and ended up purchasing the vehicle in 1955. See the Certificate of Title (140K JPEG) and Registration Card (110K JPEG) from the collection of Ron Szymanski.

The Ordoricas had recently moved into a new home in the suburbs of Toledo. It was a sprawling, wooded place, and Mr. Ordorica soon found that he needed a work vehicle. The CJ-4 spent the next 22 years in obscurity, plowing snow, dragging logs, discing the garden, hauling wood-- whatever. It never left the property, and racked up only about 1,400 miles, plus a lot of dents and dings. A Ramsey winch and snowplow were added.

Mr. Ordorica passed away in 1967, and the CJ was later offered up for sale. The buyer parked the Jeep in his storage barn awaiting restoration. In the midst of hot-rod and classic car work, it has stayed on the back burner all these years.

Note: The CJ-4 prototype has now been sold to another collector, who intends to restore it.

"Very neat vehicle. This brings up a lot of questions as to where Jim Allen received the information on the X-numbers. (The sequence numbers being the first digit and the last 2 being the year.) I do not believe this to be the case unless they started this in 1951. The CJ-2 prototypes seemed to go from X20 to X64 and obviously they did not use this method for assigning X numbers. It would be very interesting to know what its serial number is and what its axle assembly dates are to really date the vehicle.

"I also do not understand how this vehicle could be the first to have an F-head engine since the CJ-3B model would have had its prototypes as well. (Since the F-head introduction occurred in late 1949, I would assume Willys was kicking around the idea of putting this engine in the CJ after putting it in the station wagons and pickups. They would have put together some prototypes in that time frame.)"

"You really can't go by the year on the title as the determining factor for its year of manufacture. During this time, there were very liberal rules as to what was placed on the title. Most of the time, the year in which the vehicle was first sold was used as the year. It was common practice for dealers to send back their Manufacturer's Statement of Origin at the end of the year to receive "updated" titles. The best way I have found out to date a vehicle is by its axle assembly dates. The axles generally were not changed (unless some Jeep hacker got hold of it). 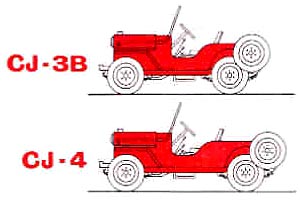 To confuse things even more, licensed manufacturer Mahindra & Mahindra in India used the label "CJ-4" for their long-wheelbase version of the 3B.

Thanks to Jim and to Jp magazine for the 1997 article, and thanks to Hubert Cossard for the X151 and CJ-4 drawings. -- Derek Redmond

Also on CJ3B.info, see the Military CJ-4M, and some original Willys Engineering Calculations: CJ-3B and CJ-4.