The Jeep Horn and its Meaning 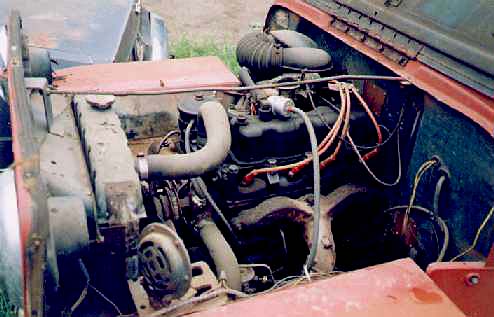 On installing a battery in my "new" 1953 CJ-3B I was checking out some of the electrical system, and in doing so I pushed the doorbell button attached to my steering column. The sound threw me back to the last time I heard a CJ-3 horn, on my first Jeep, a CJ-3A in the 1970s. It was that no-nonsense aggressive "HONK!!" we've come to appreciate. No Peterbuilt air horn Blast, no harmonious Hoot, no melodious classical refrain, no sissy '90s Beep, no phoney Ahooga, but an honest to goodness he-man "Honk!!"

I took this photo on the day I found the Jeep. You will note that the horn is mounted on a bracket which once held some equipment for the snow plow, so the position of the horn isn't correct. Judging from the paint though, it is the original horn.

So eat your hearts out, all you guys with your fancy spray painted Jeeps that run, and your dirt and oil free engine compartments. If it don't honk like a Jeep it is missing the soul of Jeep.

When Bart posted the above on the CJ-3B Bulletin Board, it prompted some others to disagree about how to describe the horn sound.

Adam Charnok: "My horn (1963 CJ-3B) goes Meep, Meep. It's kind of comical. It definitely doesn't have that loud Honk sound. As far as I know it's the original horn."

Adam Sparks: "Yup, the horn on my 62 CJ-5 does the Beep, Beep, sounds like the Roadrunner if you do it just right. Far as I know it's original...."

Jim Sammons: "I didn't know Jeep horns made any other sound than Beep Beep! How do you think the Road Runner got its sound? I'll bet they used a Jeep horn. In the cartoon, not the car. Who cares what Plymouth did? My CJ-3B's ORIGINAL HORN goes BEEP! BEEP! and very loudly as a matter of fact."

Steve Slane: "JC Whitney sells a Beep Beep horn for $19.96 that is amazingly close to the original product. It sounds identical to the Plymouth Roadrunner horn of the '60s and '70s, and also like the 24v military horns on our military vehicles in the '70s. This is about as close a repro as you're likely to get.... I've got one on order for my CJ-2A."

According to the 1956 Parts List there were two horn assemblies used on the CJ-3B, one made by Sparks-Withington ("Sparton") and the other an Electric Auto-Lite.

In a 1961 specs sheet from the Automobile Electric Association, the AutoLite No.HA-037 is listed as the 6-volt standard part, and the Sparks-Withington No.C-6960 is the 12-volt part. It's unclear whether the two types have particular distinctive sounds. Different sounds may also be due to differences in the setting of adjustment screws on the horns. (See below for audio samples.) 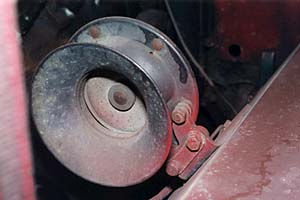 The photos here show the AutoLite 6-volt horn on a 1953 CJ-3B belonging to Tom Edwards. See also a side view photo (40K JPEG).

The AutoLite horns may be identifiable by the bell shape on the front, rather than being flat with a grille covering the front. 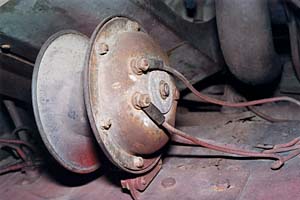 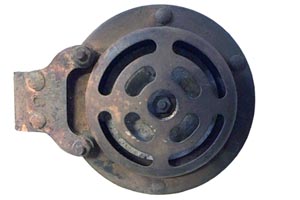 The Sparton horn are identifiable by a flatter shape and a grille on the front with four slots in a circle.

Some of this style of horn have five slots around the front: see a front view (25K JPEG) and side view (30K JPEG) of a reproduction Sparton horn.

Bart McNeil comments, "The Sparks-Withington Company was an electronics company in Jackson, Michigan, maker of radios and among other things car horns. Apparently Sparks-Withington had been using the name Sparton for its horns since early in the century, and in 1956 changed the company name to Sparton."

Discussion on the CJ-3B Bulletin Board resulted in some sound recordings being submitted, which we hope will help establish a consensus regarding the authentic sound of the horns used on Willys Jeeps.

You can also hear a DJ-3A horn in the movie Ride the Wild Surf.

Thanks to Bart, Tom, Todd and the other contributors. -- Derek Redmond