A rare photo op at the summer 2004 national muster of the Society for the Preservation and Appreciation of Antique Motor Fire Apparatus in America: Gary Dreyer's 1954 Commando side-by-side with Larry Zotti's 1950 CJ-3A. 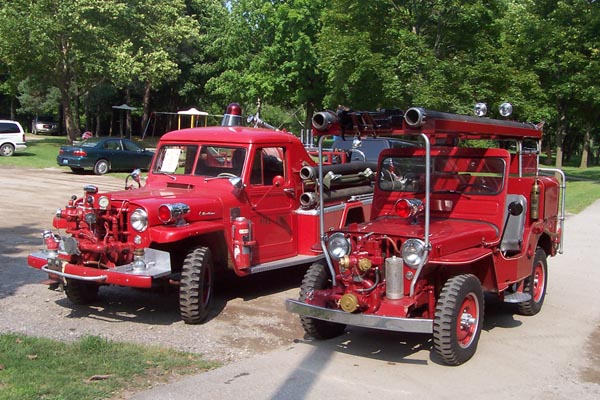 The Commando, formerly Engine 153 of the Grandville, Michigan Fire Department, was built on a Willys 6-226 chassis by the General Fire Truck Co. of Detroit. The CJ-3A carries Willys serial number 55034, and S.N. 8147 from Howe Fire Apparatus of Anderson, Indiana. They were photographed together by Gary Dreyer. 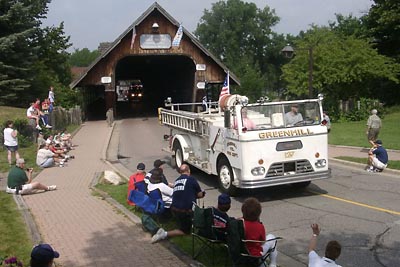 The national SPAAMFAA meet was held in Frankenmuth, Michigan on 29-31 July 2004. The event was hosted by the Great Lakes International Antique Fire Apparatus Association, a chapter of SPAAMFAA that includes members in both Canada and the northern U.S.   One of the highlights of the weekend was a huge apparatus parade. Photo courtesy of GLIAFAA. 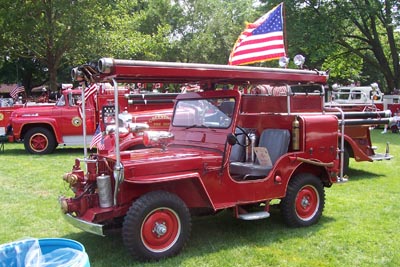 Larry Zotti travelled to Frankenmuth from Granite City, Illinois where he's curator of the Granite City Fire Museum. He says, "The Jeep was delivered from Howe to The Principia College in Elsah, Illinois in 1950. The school owned it and kept it in service until April 2004 when I bought it with its matching trailer. I am in my mid-fifties and my family has always been 'Jeep.' My father owned a couple of 40's and 50's-vintage Jeep wagons back in the 60's. I have had six Willys and one AMC Jeep in the past 30 years. I have a real love for old fire engines and Willys Jeeps. I can't think of a better way to satisfy both." 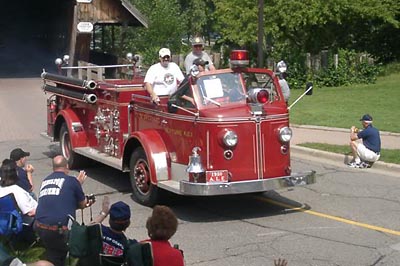 Of course there were plenty of other trucks to admire in Frankenmuth. This American LaFrance pumper was built in 1950, the same year as Larry's CJ-3A, and the crew got lots of admiring waves from the crowd along the parade route. Photo courtesy of GLIAFAA. 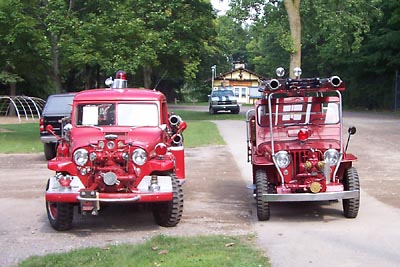 The front view of the Jeeps together is interesting -- the narrow Universal Jeep looks tiny even in comparison to the Commando, which itself is a small truck when compared with full-size pumpers.

See also both Jeeps from the right side (220K JPEG).

See more details and photos of Gary's Commando built by General Fire Truck Co. on CJ3B.info.
Thanks to Gary Dreyer and Larry Zotti, and to SPAAMFAA and GLIAFAA. -- Derek Redmond