How We Bought a Jeep CJ-3B Hook, Ladder & Pump Truck

There is a 2016 update to this story originally sent to us by Fred Scott in 2004. This CJ-3B Fire Engine is still in rare original condition, and I'm hoping it will finally get the restoration it deserves. See the bottom of the page for some new photos. -- Derek Redmond 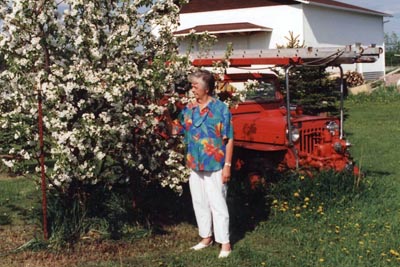 Vi and I got this little fire engine at an auction sale in Ocean Falls, British Columbia in 1986. I had taken Vi to see the town where I was born in 1928 and first raised as a young man, and this is how it came about:

I was at an auction in Calgary in 1985 and got a boom truck for my company Scott Steel to do some special work on the Dunvegan suspension bridge crossing the Peace River in Alberta. While at this auction I spotted a brochure regarding an auction coming up in a few months in Ocean Falls BC. The pulp and paper town had fallen on hard times when Crown & Zellerbach shut it down in 1973, the first time all the people that loved living in the town left.

Some months later the government took it over, and most of the people returned. There were four paper machines, and they cannibalized three machines to get one in working order. Then they discovered Crown & Zellerbach owned all the surrounding timber rights and wanted good money to get their timber. That was out of the question, but the government went ahead and started cutting timber surrounding the valley of Ocean Falls where the BC government had the rights. 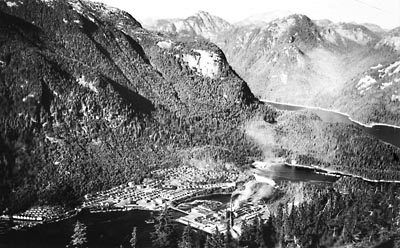 The BC government, or any government, cannot manage private enterprises -- they are too bureaucratic. They spent too much on equipment and supplies that they did not really require, bought by purchasing agents not familiar with the business. The operation started to decline and people started leaving because they could see the problems that government couldn't. The government was forced to shut it down for good in 1980. It took another six years for the government to auction off all the mill equipment except for the buildings that could be used for other businesses.

In the spring of 1986 I picked up the auction brochure and started reading it for the first time. It said they would have a 300-passenger ship at Bella Coola to transport people to the Ocean Falls auction, put you up in the hotel, and feed you for 3 nights and 4 days for $200 each. That was pretty cheap, so I asked Vi if she would like to see Ocean Falls. She answered yes, she always wanted to see Ocean Falls as she has heard so much about it from me.

I made the bookings and took our camping van to drive from Edmonton to Bella Coola, a real adventure in March of that year. The boat trip turned out to be an international event with people all around the world -- a fun trip you might say, as we were only going to see the town, not the auction. After arriving we checked into the 500-room Martin Inn that had been closed for a number of years. We slept on single beds up on the third floor, and the elevator creaked all the way up. We were fed well by cooks that knew how to feed a hungry crowd. 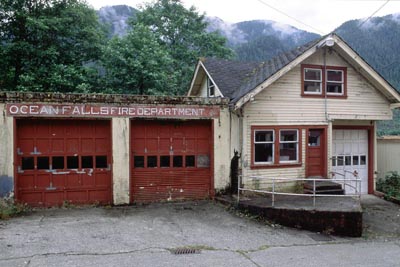 The first morning we walked up through the town that was being dismantled. We went right up to the ballpark above the hydro dam, then back around the town as I explained everything I remembered. We walked a mile out of town to the old farm, and while out there Vi and I ran into four men from France, Australia, UK and the state of Arizona. They came for the auction, but they couldn't get over why this town was shut down as they thought it must have been a wonderful place to live.

After a good dinner Vi wanted to turn in as the whole day touring had tired her out. I was still anxious to see the mill where my father worked as steam engineer, and walked across the bridge that separates the town from the mill. When I passed through the old time office where employees punched in, suddenly the memory of me carrying my dad's hot dinner to the mill on afternoon shift came to me. I could see it so clearly coming to the front mill entrance. I knew right away the next place would be the machine shop, then the pipe fitting shop followed by the welding shop. 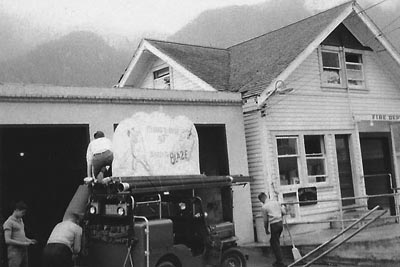 I stopped and before me was a big red sliding fire door; in this door was a man-door. I said to myself, on the other side of this fire door should be a Corliss steam engine, and sure enough there it stood silently. There was a big flywheel with a drum that drove a long line shaft, as long as the paper machine on the next floor above. Then I saw the shiny governor I use to watch spinning around while my dad's dinner was getting cold.

I said, now if I turn to the right there will be a hallway leading to a door that goes outside to the boiler plant. Reaching the boiler plant I walked up three or four flights of steel-grated stairs to the turbine floor of the steam plant. It was around 9 P.M. and all the overhead lights were still on, the control boards were all lit up, and no one was around. I slowly walked around looking at all the instruments of the recorders, controllers and meters.  It was hard to conceive that no one would be working here anymore, and all this would soon be gone including the overhead crane above me.

I entered the steam plant office went through about fifty drawers of filing cabinets looking for my dad's daily handwritten records, and found them back to 1923. There were names of men that I remembered working here with dad -- some of them had been to our place for a Sunday dinner. There were handmade drawings of valves that needed replacing years ago, and a blueprint of a Corliss steam engine. I removed all these papers, taking them with me to show my mother; my dad had already passed on. 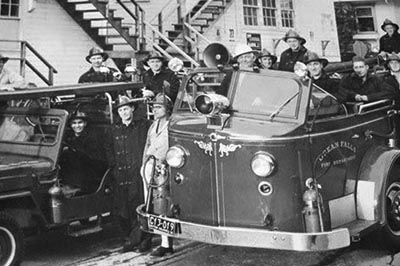 On the last day they were auctioning off all the trucks and mobile stuff. I toured Vi through the mill and we came across the auction. There was a big, brand-new fire engine that came in at the same time the mill was shut down, and next to that fire engine was a little special fire truck complete with hook, ladder and a big fire pump. It had all the equipment including a flashing siren. I said to Vi, we sure could have fun with that in an Edmonton parade. We both got interested in this little Jeep fire truck.

The little fire truck was now on the block. I made a bid, someone else made a higher bid, I bid again and again. This guy was sure after it, but I didn't let that stop me, and ended up paying $5,000 for the fire truck. The other guy was pretty upset but we got it.

The truck was manufactured by the Indiana Fire Apparatus Company on a 1952 Willys Jeep, complete with a 500-gallon suction pump on the front. Ladders, hook, floodlights and large suction hoses were located on racks above the vehicle. It had a 250-gallon water tank in the back, all piped in to various hose connections from the fire pump in the front. So the fire pump would not freeze during the winter, it was protected by hot water running from the radiator. There were piles of wrapped-up 3-1/2" fire hose in the back, plus a 1-1/2" round hose on a drum that led out the side. On both sides there were special spare parts compartments for tools, spare valves and spare hose nozzles. On the rear was a step for firemen to stand on with handrails to grab on to. There was a place for a large wrecking bar across the back, and a fire axe behind the driver's seat. 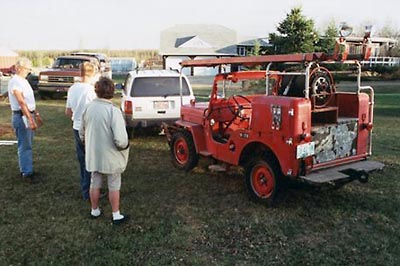 I made an arrangement with a fellow who was looking after barging the fire truck to Vancouver (paid for by the government) that I would pick it up.

The next morning on board the ship getting ready to leave Ocean Falls, that fellow in charge of barging came up to Vi and said, Mrs. Scott that fire truck you got yesterday gave us some trouble last night. When the elevator operator was taking it down to load on the barge in a strong wind, the barge moved away from the wharf letting your fire engine fall straight down between the wharf and the barge, out of sight. Vi's mouth and eyes were wide open in complete shock, and the people that surrounded us started to laugh. This fellow pulled one on Vi; he knew she could take a joke and she would get a good laugh out of it too.

We left town heading around the point and I was standing on the stern. I became very sad to see Ocean Falls slip away slowly out of sight. 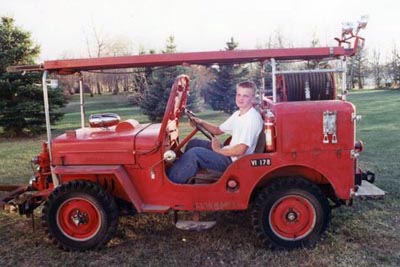 We picked the fire truck up in Vancouver and towed it home to Edmonton, Alberta. I have had a lot of fun with my grandchildren in it, driving down the street and out in the country with the siren blowing. At the moment the Jeep is stored in Sherwood Park, Alberta. My son and grandson are going to refurbish it whenever they get time.

-- Fred Scott (now retired in Parker Cove on Okanagan Lake near Vernon BC.)

Thanks to Fred for recording his story and providing his photos. He eventually sold the Jeep in Calgary, and it was sold again online in mid-2016, so I don't know where it is located now. Another thing that isn't known about this rare original CJ-3B fire engine, is where it was built.

The Jeep was advertised as a Howe CJ-3B when it was sold in 2016, and it does look like a conversion done by Howe. It has the usual bump in the hood to accommodate the extended carburetor. Fred told us originally that it was built by the Indiana Fire Apparatus Company, but the only company I know of by that name was apparently not established until 1977. There were several apparatus manufacturers converting Jeeps in Indiana, including Howe (see More Willys Fire Trucks on CJ3B.info.

There is no Howe identification plate that I can see in the photos (see the interior, 160K JPEG) and there are some unusual details, including the fire axe mounted behind the seats instead of over the rear wheelwell. 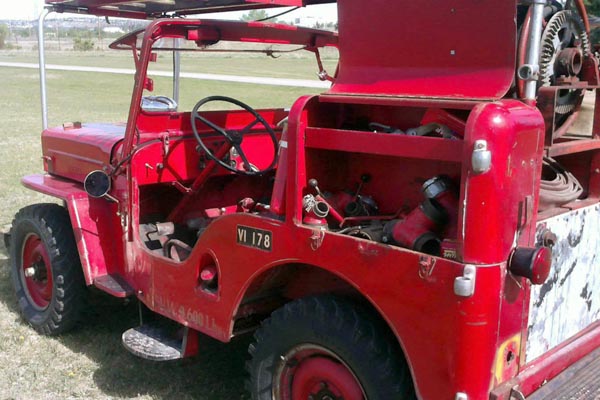 The booster hose reel, which Howe normally mounted on a water trailer, appears to have been added by the Ocean Falls F.D. some time after the two black & white photos above were taken.

The only other photo I have seen of a "factory" CJ-3B Fire Engine with a booster reel, is the one used at the Willys Motors plant in Toledo (see CJ-3B Factory Fire Engines. 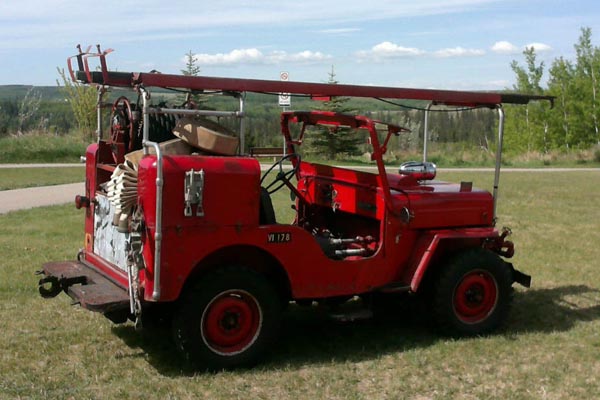 The two lengths of suction hose are missing, and the condition of the pump, plumbing and water tank is unknown. The only obvious major modification is the apparent repair or replacement of the water tank. See also the right storage compartment (180K JPEG). 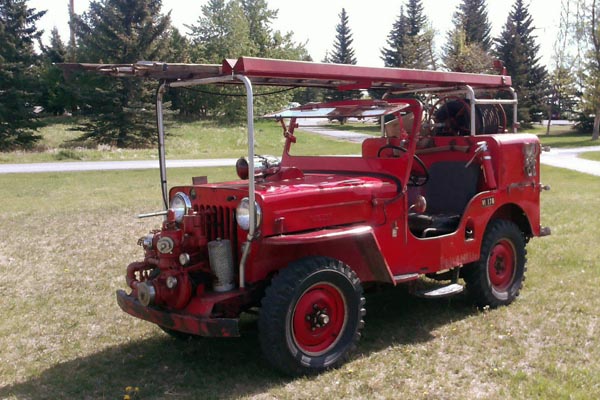 I hope this rare Jeep will be carefully restored, or at least preserved in its very original condition, and I hope the new owner will update us further at some point.

Thanks to the Ocean Falls Museum for the historical photos, to John Harvey for the firehouse photo, and to bigshowglenn on eBay for the 2016 photos. -- Derek Redmond