Jeep 33 of the Toronto Islands 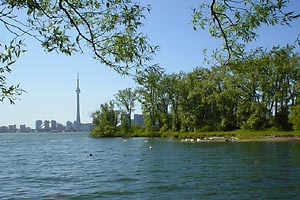 The Toronto Islands are an L-shaped archipelago of islands, a 10-minute ferry ride from downtown Toronto, which provide protection for Toronto's harbor from the wind and waves of Lake Ontario. In the early part of the 20th century the islands were home to thousands of residents, but much of the area is now parkland. There are also a couple of yacht clubs, the Toronto Island Airport, a small amusement park, and a year-round community of about 250 small cottages laid out on narrow streets open only to pedestrian and bicycle traffic. 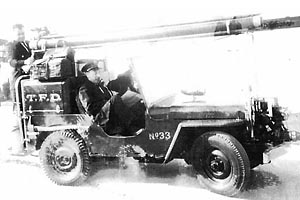 This faded, unidentified old photo found by Rene Lemieux in Québec, was posted on CJ3B.info for several years before it was finally identified by Greg Steffler, Toronto firefighter #546. Greg said, "I recognised that blurry picture as Pumper 33 which was stationed at the old Ward's Island fire station from approximately 1946 to 1968 when it was replaced by a newer Willys pickup, also equipped to fight fires on the remote Toronto Islands. These lightweight vehicles were required to negotiate the many lightly built bridges that linked the numerous islands, as well as traversing the beach areas." 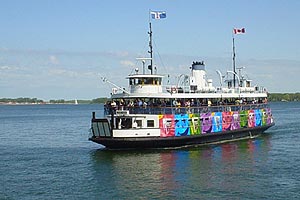 When my family visited Toronto in 2003, we decided to take the ferry over to Ward's Island, to try and see if there was any evidence remaining of the old CJ-2A fire engine. We were lucky enough to be able to walk right onto the ferry; on hot days in the summer it's not uncommon to have to wait an hour or more to get onto one of the several boats travelling back and forth. This ferry is flying the Toronto flag and the Canadian flag. 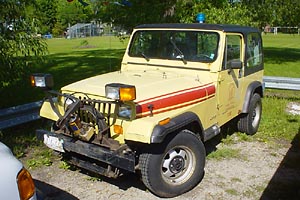 One of the first vehicles we saw on the island, and in fact one of the few vehicles on the Toronto Islands larger than a golf cart, was a YJ Wrangler used by Toronto Public Works to plow snow from the narrow roads. But there was no sign of the Jeep we really wanted to find. 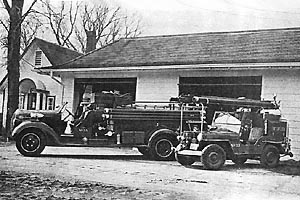 Greg Steffler did manage to dig up some better archival photos of Jeep 33. Greg would like to know what happened to the Jeep too: "Jeeps have been a part of our family since my Dad brought home a late 40's CJ-2A to plow snow and gravel as part of our family business in the mid sixties. At 15 I taught myself about repairing vehicles when I purchased my own Willys from a local farmer. It was so easy and so much fun to work on. If only I could locate that old island pumper today."

Jeep 33 is seen here in 1961, with its companion full-size pumper, a 1937 Ford/Bickle, in front of the old Station 33 at 84 Cibola Avenue on Wards Island. See also an earlier photo of the pair of apparatus in their Island Station Temporary Quarters (100K JPEG) prior to the completion of the station. 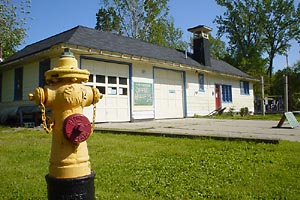 We ran into Martin Lister at his house on Ward's Island, and he tipped us off to the fact that the old fire station is now home to the Island Canoe Club. Walking over toward Centre Island we found it, but the only sign of its former role was an old extinguisher cart (180K JPEG) rusting in the bushes. 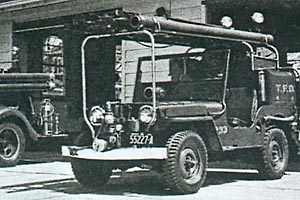 Alan Craig, Deputy Chief of Toronto EMS, has provided more details on Jeep 33: "The 1947 Jeep pumper was a conversion probably done by American Marsh in Stratford, judging by the pump."

Jan Morrison points out that it was likely a product of Sterling Machine & Mfg. in Owen Sound, Ontario. Between 1945 and 1950 they produced fire trucks for Canadian customers using designs licensed from American Fire Apparatus Company of Battle Creek, Michigan. The trucks were marked Sterling Machine & Mfg., but were identical to those produced by AFA in Michigan for the US market. The parent company American Marsh Pumps opened a Canadian division and manufacturing facility near Stratford in 1951. It was called American Marsh Pumps Canada Ltd., and starting with the 1951 model year, they produced AFA trucks in Canada.

Alan Craig continues: "The truck was brought back to the city side in 1968 when the ex-Forest Hill Willys pickup went out to the island. The Jeep was then assigned to the Motor Shops on Ordinance Street as a service truck for the mechanics. It was a regular presence until the late 1970's when it went to auction. The 'No.33' lettering was still visible on the side of the rear panels.

"Interestingly, the Jeep's predecessor was an Indian motorcycle. The Indian company did quite a few conversions for brush firefighting, placing fire equipment in what would normally be a sidecar." 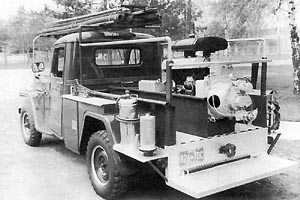 It's not clear why the TFD felt that the CJ-2A was ready for retirement in 1968, but in that year they replaced it with the Willys pickup. Greg says, "This second Willys was acquired from the old Forest Hill fire department when it was amalgamated into the City of Toronto circa 1967."

See also a front view photo (120K JPEG). According to captions on the archival photos, the truck had been bought by Forest Hill for plowing snow in 1954, and after Forest Hill was annexed it became 33 Jeep in March 1968. It appears to have been outfitted with a large gas-powered pump, as well as a rear step and handrail for carrying firefighters. 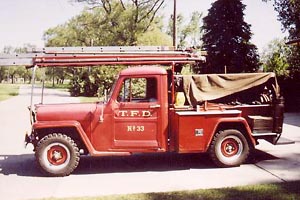 The Willys had suction hose for drafting from the lake which was never too far away, but doesn't appear to have had have a booster tank or hose reel for quick response to fires in the small structures around the islands.

Ken Buchanan took this photograph of the truck in 1979, shortly before it too was retired. Ken says, "It had a 250 GPM pump, and it ended up in the Niagara area at a car lot and was sold to persons unknown." 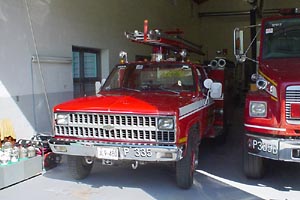 The Willys pickup was replaced by a 1982 3-man closed-cab Chevrolet/Pierreville mini-pumper. I took this photo of that truck still in service at the new Station 33, as we continued our stroll around the islands. 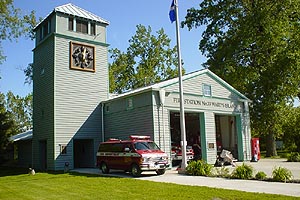 The new fire station is a beauty, and tall enough for modern apparatus, but we found a full-size pumper and a small aerial unit squeezed into the two bays along with the mini-pumper, and a van parked outside.

Isaac Mazer told us in 2010 that "TFS replaced the '82 mini-pumper with a new Ford F-550 mini-pumper. The van was replaced by a 03'/'04 Ford Econoline XL and the full-size pumper was replaced with a former Scarborough '97 E-One Quint." 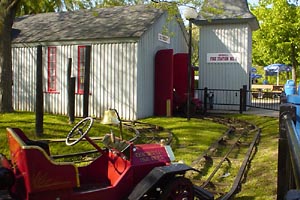 We crossed the bridge onto Centre Island, and had a laugh when we found yet another fire station there. This one is called "Centreville Fire Station No. 1" and is part of the amusement park. Four old-fashioned vehicles carry children around a track as they happily ring the bells.

We rode the Sky Ride chair lift which provides a bird's eye view of that part of the islands, but we didn't find any more clues about Jeep 33. So we hopped on the ferry for the trip back to downtown Toronto, where we caught the Blue Jays at the Skydome.