CJ-3Bs as early as 1953 were converted to fire service by individual fire departments as well as after-market manufacturers. As of 2017, not very many of those CJ-3Bs are still in service, but this one just retired and in June 2017 was sold by auction: 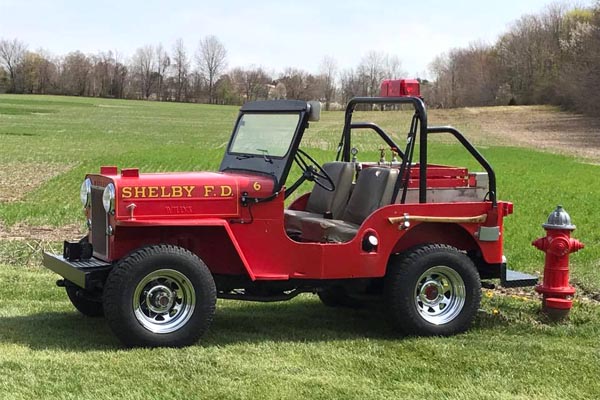 The sale announcement states, "The Shelby Fire Department is selling a 1963 Willys model CJ-3B Jeep that was used as a grass truck from May 24, 1963 to April 14, 2017. The vehicle has only been owned by the City of Shelby and has 9,666 orginal miles. The tailgate was removed when new and put in storage. It has been reinstalled and is in near mint condition." 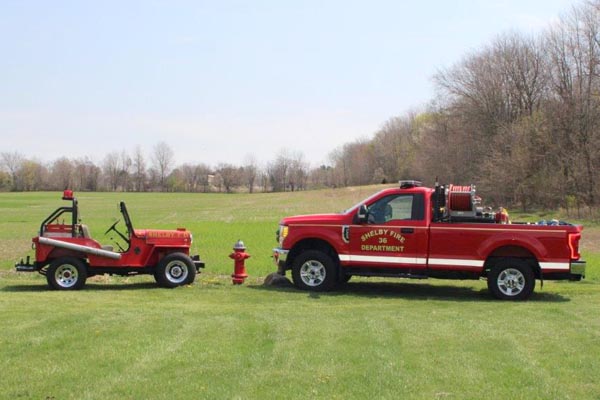 The Jeep was replaced by a new pickup truck which was converted into Brush 36. Fire Chief Mike Thompson commented to the Richland Source newspaper, "The 1963 Jeep did not meet modern safety standards, and it was time we parted ways. It has served the city well, but there wasn't a top for it and no heat, so in the winter it just sat. By having a pickup truck there are more things we can do with it, and it gives us a little more bang for our buck."

The auction was won by Richard Kimball of Ohio, whose Forward Control Pumper has been featured on CJ3B.info. 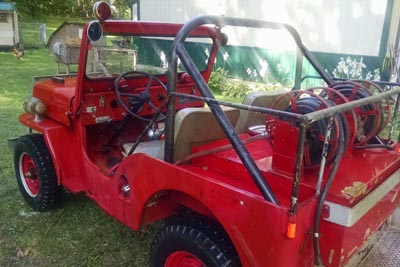 Have you been looking for a CJ-3B fire engine? Don't give up hope -- Rob Ridener of Bethel, Ohio found this one in a barn, along with two other Jeeps. The 1964 CJ-3B was purchased new by the Batavia Township FD because they liked their 1947 CJ-2A so much, but eventually sold at auction.

From the two hose reels and the front mounted winch (330K JPEG) it's clear this was a brush rig, but it doesn't appear to be set up to carry any gear like shovels or backpacks. The pump is mounted between the seats, running off the PTO. 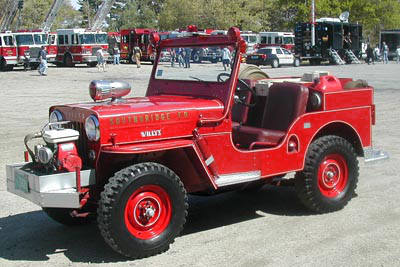 Here's a pretty practical idea for a fire Jeep -- and this CJ-3B was still in use by the Southbridge (Massachusetts) Fire Department when this photo was taken by Roger Lavallee in May 2006 at the Tri-State Firemen's Muster in Webster MA. Tremaine Cooper sent a photo of the interior (50K JPEG) and says, "The top racks were taken off after driving in the woods with them was found not to be a good idea (low branches). They replaced the direct drive front pump with a Honda gas pump that they could service more easily. Otherwise pretty original."

A 1953 CJ-3B was part of the factory fire brigade at the DE (Douwe Egberts) coffee processing plant in Joure, Friesland, in the Netherlands. Together with its 1935 mobile pump (180K JPEG), it wasn't retired from stand-by duty till 2004, and is now in a private collection.

Davydutchy, who uploaded the photos to Flickr, thinks the trailer pump engine (160K JPEG) may be a Lincoln. Thanks to Davydutchy and to Wes Kibble. 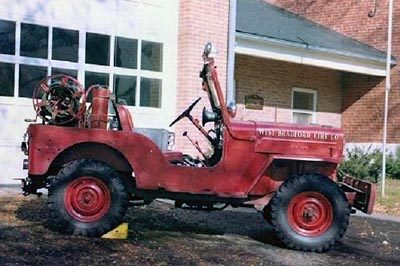 This 1953 Willys was the original brush Jeep at West Bradford Fire Company in Pennsylvania, who now have a very slick CJ-7 designated Brush 39.

Jim Fairweather of West Bradford says, "I believe that the 3B was purchased from Herb Wiley (20K JPEG) here in West Chester. That's the same Wiley Bros. & Lewis mentioned in From Broadway to Halfmoon Valley Road on CJ3B.info. My Grandfather bought a '48 Willys PU there as well." 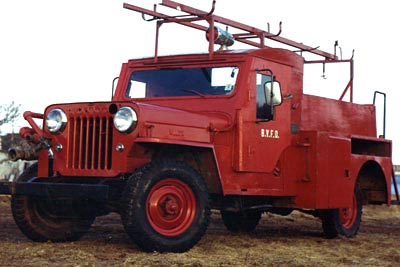 Here's a unique conversion, done either by an apparatus builder or a very ambitious volunteer fire company. We don't know its origins, but it was donated to Blandford Area Fire Rescue in Nova Scotia, Canada, by nearby Hubbards Fire Department, when BAFR was established in 1965.

The 1956 CJ-3B had a 200-gallon water tank, and Hubbards also donated a surplus 1947 Ford oil truck to serve as a water tanker. The Blandford department answered a total of eight alarms their first year, all of which were fires. 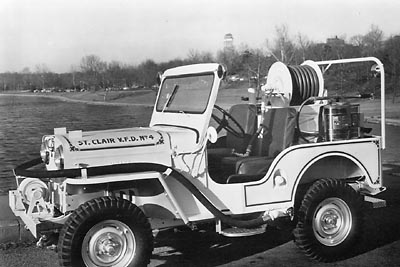 Here's an historic photo of a nicely-appointed fire Jeep back in its glory days. This 1954 CJ-3B, serial number 454GB2 14209, was originally purchased by the St. Clair, Missouri Volunteer Fire Department. It was converted by Central Fire Truck Corporation of St. Louis, who added standard fire hydrant connections, a PTO-driven pump, 100-gallon tank and a front-mounted winch. The total cost was $3,400.

The Jeep is now used on Kenny Jahnsen's farm in Grubville, Missouri, and no longer has the fire equipment. The PTO now runs a rear winch. Thanks to Dale Bruns for the photo. 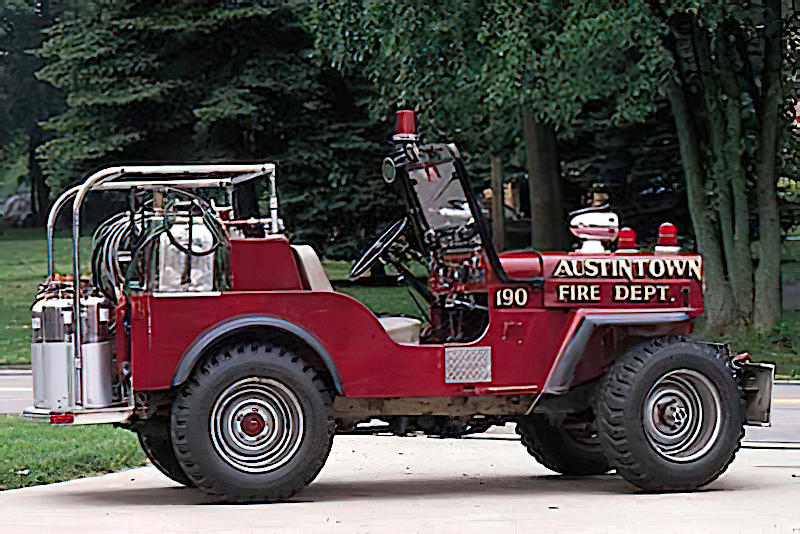 Still in service and looking very functional when it was featured in an early issue of Jp magazine, this 1964 CJ-3B is a grassfire rig in Austintown, Ohio. It carries a 100-gallon tank, two 200 ft. hose reels, and a battery of extinguishers.

The full article, written and photographed by David Fetherston, is now on the Jp website. 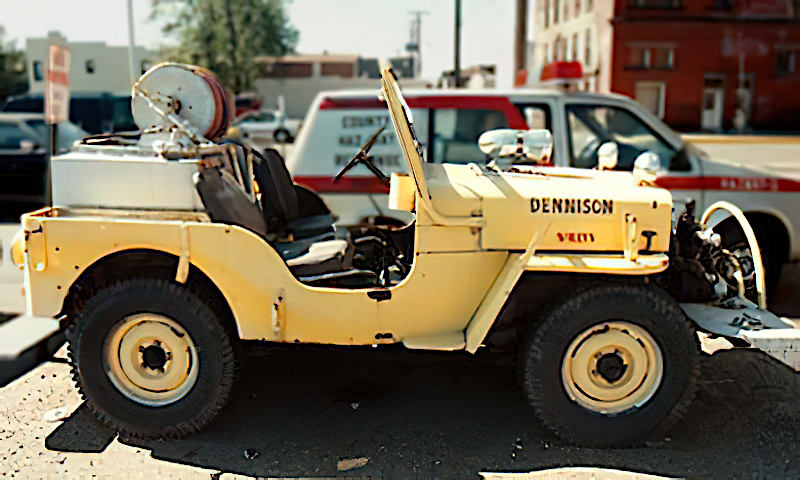 This CJ-3B belonging to the fire department in Dennison, Ohio, was taken out of service with only 6,519 miles on the odometer. It formerly belonged to the nearby city of Uhrichsville, but was sold to Dennison for $1 as a brush fire vehicle.

Shawn Nelson, who drove this Jeep for Dennison at one time, says he thinks it was a 1953 model. "The real bad thing was it sat outside all year long uncovered. It did have a half rag top on it which rotted away, and then it was left to the elements. The truck was restored from the ground up in I think 1987 by Buckeye Joint Vocational School but being left outside all those years didn't do it much good."

After this photo was taken by Bob Christy, the Jeep was sold by the Department and later dismantled. See a closer photo of the large front pump platform (40K JPEG). 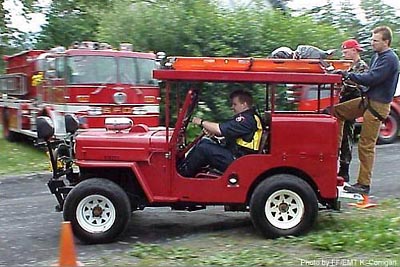 The Seward, Alaska Volunteer Fire Department originally acquired this CJ-3B as a pumper. The Jeep then stayed in service as Squad 1, their Mountain Rescue Unit and snowplow. It could carry two personnel in the cab and two more standing on the tailboard with climbing harnesses locked on. It was retired in 2006 (180K JPEG) and as of 2018 is at the Museum of Alaska Transportation and Industry near Anchorage.

The top of the Jeep was equipped with a platform for carrying a victim in a rescue basket. It's seen here in action during the Mt. Marathon Race on July 4, 2000. The new Squad 1 (60K JPEG) is a 2006 Wrangler Trail Edition. 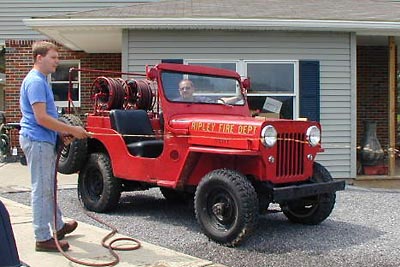 The Jeepin' Wests in Pennsylvania added this CJ-3B fire engine to their Jeep collection. Melanie West says the Jeep was formerly in service in Ripley, Ohio.

Jim Allen pointed out in his article "How to Restore Your Jeep" in the June/July 1998 issue of Jp magazine, that because fire Jeeps can't be used for much other than display, they are not generally as attractive to collectors as they might be. But the Wests have used this one for hosing the mud off Jeeps at off-road events.

See also some high-hood Fire Jeeps in Minnesota on CJ3B.info.