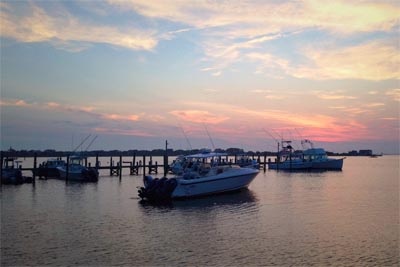 On a map of North America, you may just be able to pick out a thin line in the ocean south of Long Island, NY. Fire Island is a barrier island approximately 30 miles long by half a mile wide, about 5 miles off the shore of Long Island. It's also home to a number of vacation communities that are vibrant in the summer and quiet in the winter; the year-round population of Fire Island is only about 500. This photo by Matthew Ireland shows Fair Harbor, one of the locations on the island served by ferries from the mainland. 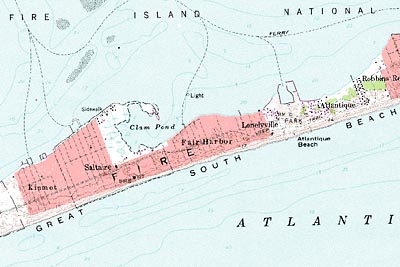 There are virtually no vehicles on Fire Island, and the topographic map of this section of the island shows ferry routes, walking trails and boardwalks.

On the larger copy of the map (150K JPEG) you can see that the only road that links the communities strung along the island is labelled "Jeep Trail" -- perhaps in recognition of the Jeeps formerly used by Fair Harbor and two neighboring communities.

Fair Harbor Fire Department is a full-time volunteer department organized in 1931 by a group of homeowners in this unincorporated community in the western section of Fire Island. Given the summer resort nature of Fair Harbor and the surrounding communities, there are a limited number of volunteers available in the winter months. But from spring to fall, the Fire District grows in population with homeowners and renters seeking the sun, sea breeze and water sports. The risk of fire is greatest then, and the Fire Department also has an influx of seasonal volunteer fire fighters. 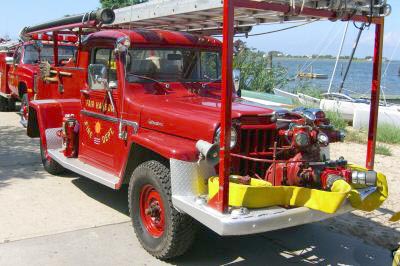 This 1960 Howe Willys fire engine had a remarkable 2,746 miles on the odometer when it was retired in 2006. It was auctioned in January 2007 in fully operational condition. The 500 GPM Waterous front-mounted pump has two 2-1/2" and two 1-1/2" discharges, and there is a separate prime pump for drafting with the 4" suction hose. The onboard tank holds 100 gallons of water, and as sold the truck included 500 feet of 3" hose in the hose bed. 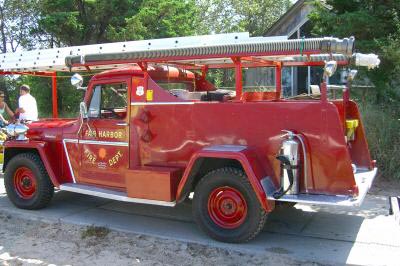 Howe and Willys builder's plates (30K JPEG) carry Willys serial number 55168 22327, GVW 6,000 pounds, and Howe Model A-S-AP, serial number 10729. The Howe Fire Apparatus Jeep Production List indicates that the truck was delivered new in 1960 to White Plains, NY, from where it was apparently sold by a dealer to Fair Harbor.

It must have been built by Howe as a fairly stripped-down version of the Willys Commando fire truck, lacking the usual storage compartments fore and aft of the rear fenders, and booster reel behind the cab. The overhead storage racks appear to have been added by the department, allowing longer ladders and suction hose than the Commando usually carried. 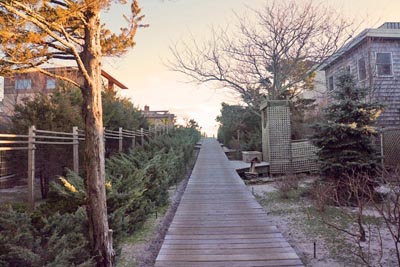 Photos like this illustrate the relaxed, quiet lifestyle of cottages along boardwalks within an easy stroll to the beach. But any firefighter would also recognize the challenge of protecting this kind of neighborhood. And, as on the boardwalk of Wildwood, New Jersey, a Jeep was an obvious choice of apparatus. 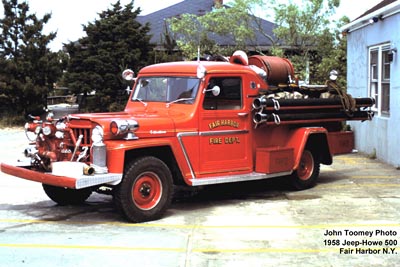 This photo of the Jeep in service, shows it prior to being repainted and having the overhead rack added. The Jeep had replaced Fair Harbor's earlier 1932 Ford (190K JPEG). Thanks to John Toomey and Long Island Firetrucks.com for these photos. 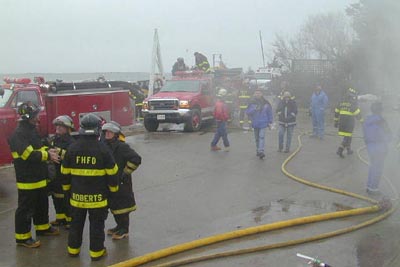 FHFD and some of the other mutual aid companies on the island now have newer mini-pumpers in service; a couple of them are seen here during a 2003 emergency exercise simulating an explosion in Fair Harbor, intended to test inter-agency communication and coordination. And in 2001, due to concerns about the reliability of the municipal water supply, Fair Harbor purchased a larger International-Saulsbury pumper (100K JPEG, courtesy of LIFT) capable of drawing 1200 GPM of salt water. 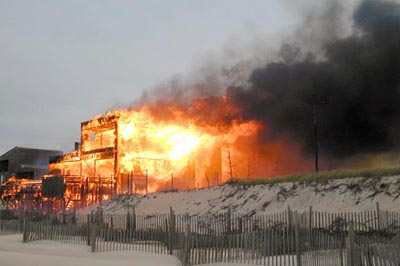 The big truck received a true baptism of fire at a 2002 oceanfront house fire in Lonelyville, just east of Fair Harbor. The effect of the typical 25 to 40 MPH wind off the ocean is obvious from this photo, and the FHFD had their hands full preventing the blaze from spreading to a number of other structures downwind. At one point electricity on the island was shut down due to burning poles, resulting in a loss of pressure in the hydrants, and all the hose lines were supplied with water delivered from the Bay by the new pumper.

State-of-the-art fire protection has moved beyond what the 1960 Willys was able to provide, and although it's no longer on Fire Island, the old Jeep will no doubt be remembered fondly by residents. Many volunteers sat in the cab or worked on the 226 Super-Hurricane engine under the hood over five decades. The dual battery setup was connected through a switch under the dash. Other details include the original floor mats and door liners (40K JPEGs). 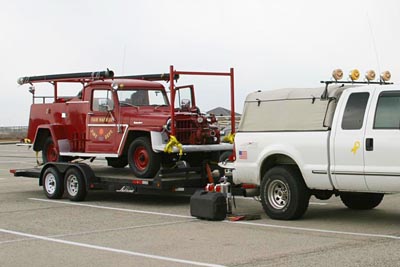 In 2007, Ed Spigle loaded the truck on a trailer pulled by his diesel F350, for the trip to his impressive garage in Virginia. 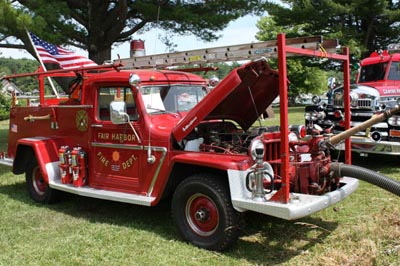 Ed belongs to the Old Dominion Historical Fire Society in Virginia, and said, "My wife Sue and I have taken her to many parades and festivals over the years, and she always gets great attention." Photo by Micah Bodford courtesy of ODFHS.org.

Note: In 2020 Ed sold to the Jeep to fire truck collector Rob Squicciarini, who also happens to be Chief at the Fair Harbor Fire Dept.

Thanks to Mathew Stegner of Long Island Firetrucks.com, and to Cherveny Real Estate for the boardwalk photo, TopoZone.com for the topographic map, and Fair Harbor Fire Department for the other photos. -- Derek Redmond

Last updated 31 May 2020 by Derek Redmond redmond@cj3b.info
https://cj3b.info/Fire/FairHarbor.html
All content not credited and previously copyright, is copyright Derek Redmond