John Carroll in the UK recently acquired this photo showing a very elegant CJ-3B fire Jeep taking part in a parade. He was kind enough to send a copy to CJ3B.info, but he had no information about where or when the photo was taken.

You don't run across a photo like this every day, so I immediately thought of it as something that should be on our cover page. But I never like to publish a photo without the story behind it, so I took it as a challenge to find out not only where it was taken, but what the occasion was, who owned the Jeep, and who was driving it. 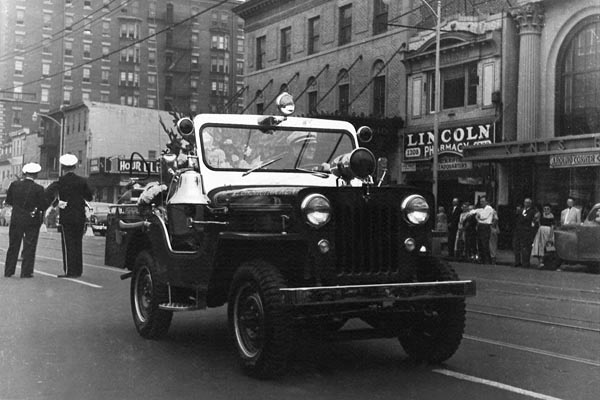 The lettering on the hood of the Jeep was hard to read (see the large 1200x800 copy of the photo, 230K JPEG,) so nobody who saw the photo had any guess what the fire department name was. So I started with the store names in the background: the Lincoln Pharmacy and what looked like Kent's Restaurant. Some web searching revealed that there were once businesses by both those names on Atlantic Avenue in Atlantic City, New Jersey.

At an "Atlantic City Memory Lane" website I found reminiscences like, "Sometimes I would go to lunch at the Lincoln Drug Store, Kents, or Woolworths 5&10." And "Lincoln Drugs on Atlantic near South Carolina Ave. also had a nice ice cream fountain. For a quarter you could get a pyramidal shaped scoop of ice cream in a glass dish. They also offered a 'pig's dinner' which was a lot of ice cream. Successfully eating it all got the eater his/her name on a plaque on the wall and the next dish of ice cream free."

There was even a connection to the Atlantic City Fire Department. Burt Evans remembered that, "In the mid-fifties I used to lunch in Kents uptown restaurant on Atlantic Ave. A good buddy and I used to eat there regularly before making a daily visit to our bookie in a little cigar store on South Carolina Ave. just a few doors south of Atlantic. Joe Hackney, a Fire Department drill instructor, also lunched at Kents frequently with another instructor, Ed Mulvihill. Joe also appeared in the water show at the end of the pier for several years during that period. He was part of a high diving act and performed the final dive from the 100-foot platform."

A visit to Google Earth confirmed that although Kent's at 1214 Atlantic is now a parking lot, the little building at 1208 Atlantic, just up from the corner of South Carolina Avenue, is still there. And pictures taken by the Atlantic City Special Improvement District show the 2005 renovations to the facade (80K GIF) by the current business, Omar & Abdullah's Hair Bazaar.

Meanwhile, New York fire historian Gary Urbanowicz recognized the keystone shape of a Pennsylvania state inspection sticker on the Jeep's windshield. That proved to be the keystone for the whole puzzle. Poring over a list of fire departments in Pennsylvania, I suddenly saw "Conshohocken" and realized what was painted on the Jeep's hood. The website of Conshohocken Fire Company No.2 in suburban Philadelphia confirmed the volunteer company had purchased Truck "J", a Willys Jeep, in 1954 to carry men and equipment.

"Conshohocken" apparently means "pleasant valley" in the Lenape native American language, and the community is locally referred to as "Conshy." Fire Company Deputy Chief Stephen Phipps told me, "I joined the company in 1975 as a Jr. Member and the Jeep was just fading out at that time, but as a kid my father was a member until the early 60's and I do remember a few rides as a child, and some of the stories the older members told after I joined. If that Jeep could write it would have had a best-selling novel."

The driver in the parade photo is the late Chief Engineer Franklin "Fritz" Thomas, according to his son Charlie Thomas who continues the family's involvement with Fire Company No. 2 since its founding in 1903. 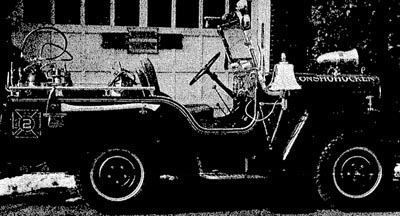 Charlie Thomas provided the one other known photo of Conshohocken Truck "J" -- a picture reproduced in the September 1955 issue of Fyr-Fyter Dealer (150K GIF), a newsletter for employees of Fyr-Fyter Extinguishers. The Jeep had its rear body extended by Harwick Manufacturing Company in West Point PA, who did fire truck conversions of a variety of vehicles.

Bells used on early Conshohocken apparatus came from old railway locomotives, so that may have been the source of the impressive brass bell on the Jeep.

Because of the huge floral arrangement, I suspected the event in Atlantic City might have been a funeral procession rather than a parade. And I thought the two men in the background were perhaps carrying their instruments from a marching band.

But Deputy Chief Phipps recognized the event: "That was the New Jersey State Convention parade; Conshohocken participated in those parades in the mid 1950s and even won a couple of times. The guys in the background are members of the Fire Company; they all carried horns filled with flowers, a round arrangement of white carnations with a '2' in red carnations."

Another document located by Charlie Thomas is a February 1957 report (170K GIF) by Fire Company No.2 on the first two years of service of their "Mighty Jeep." In those two years it had answered 127 calls, including fires (it carried two hand pumps and three extinguishers), snowstorms (with its snowplow), a flood, missing persons, extrication, emergency medical (it carried oxygen), and rescuing Santa when his parade float broke down.

There's no mention of the Atlantic City convention in the report, so we're not sure of what specific year(s) the Jeep may have attended, and we haven't discovered exactly when the parade photo was taken.

A Piece of History Saved

Thanks to John Carroll for the photo, and to everybody who helped identify it, including the folks at Conshohocken for their assistance. It's amazing how much information we came up with so quickly -- it was a research project that might have taken years or been impossible, without the Internet. -- Derek Redmond