Some of the basic restoration work had already been done when Jeep collector Mark Ciaglia in New York state bought this 1954 Howe CJ-3B Fire Engine in 2010, from Northstar Willys of Minnesota. But what Mark wanted was a complete, functioning piece of apparatus, with all the equipment and accessories, exactly as it would have been when it was on the firehouse floor, ready to roll. 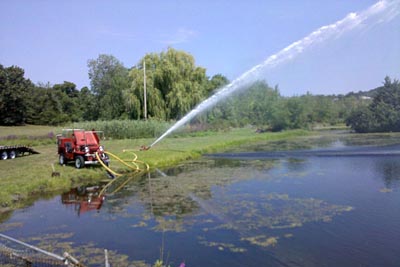 Soon after acquiring the Jeep, Mark tried out the pump, and he also began some extensive research on the available Fire Jeep literature. Mark says, "CJ3B.info has been instrumental along with the SPAAMFAA Archives at the Antique Automobile Club of America's Library and Research Center in Hershey PA, in helping to get my Jeep restored." 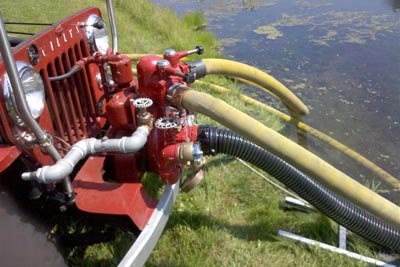 "Here is a picture taken during some pump testing. It's not done yet, but it was a good day to move some water and make sure the pump works, which it did, very well. I have all the original suction hose, ladders, etc, but it was a lot easier to use the lightweight hard sleeve and modern hose for today's testing." 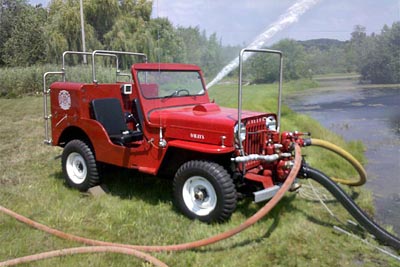 This Jeep was originally sold with Howe Fire Apparatus serial number 9257, to a Western Electric plant in North Carolina. The original 400 GPM pump was later lost, and replaced with this Barton 500 GPM pump (100K JPEG). 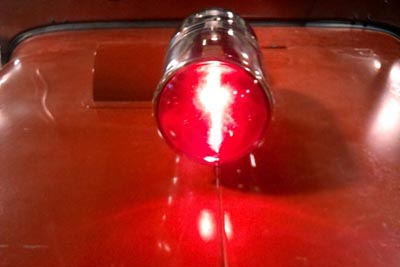 Mark says, "I completely replaced the original wiring harness, replaced the galvanived metal tubing with nickel-plated tubing, and repaired the tachometer. Much of the fire equipment has been found (if not original, period correct equipment) and new hose bought." 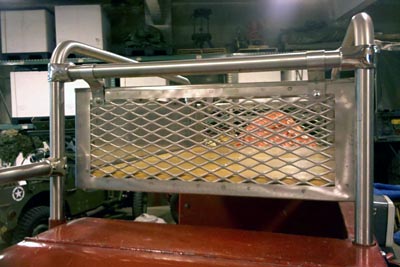 "I'm doing a pretty comprehensive resto, and it's almost done. I have fabricated the equipment box that hangs over the hose bed. I got the straps that support the basket made on a multi-zillion dollar Flow Jet machine. I have a friend who happens to run the Flo Jet and other milling machines for a company he works for." 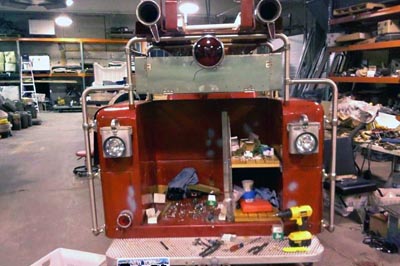 "I installed a new hose bed divider, and new wooden decking. The right side has a shelf halfway up, so two hand lines of 200 feet are ready to go. The overhead rack holds the 12-foot roof ladder, 20-foot extension ladder, 10-foot pike pole, and 2 lengths of 4-inch hard suction. 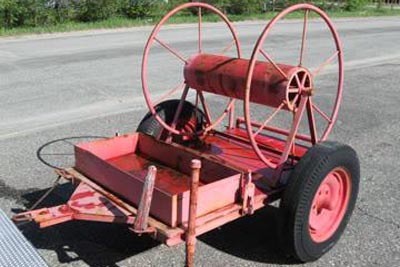 "I'm now working on filling out the hose reel trailer. I'm looking to make it look how a department might have a hose reel trailer, with associated equipment and the like, back in the day. It is basically nothing more than a big reel that holds 600-800 feet of 2.5 inch hose, and an equipment box." 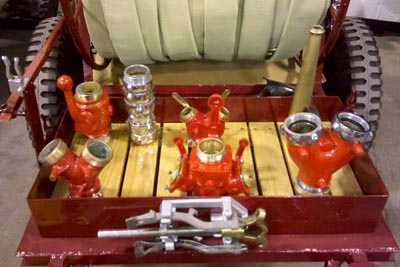 "Also on the trailer is the following: shovel, sledge hammer, two axes, two 4-foot pry bars, a Huxtool, tin roof cutter, hose clamp, hose jacket, Elkhart ground monitor mount, two 2.5-inch play pipes, two spanners and a hydrant wrench. It's still a work in progress, with some appliances not totally finished with rehab yet (like the water thief), but we're getting closer." 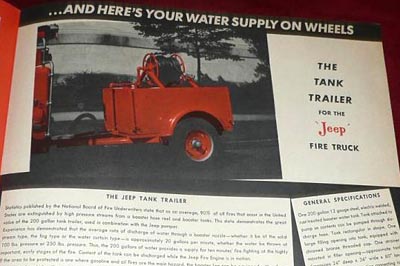 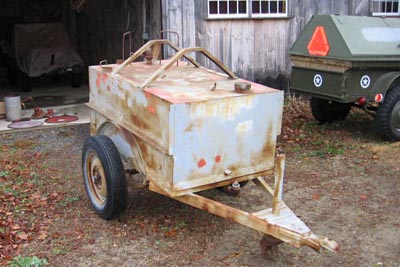 "I got the trailer from a farm in the Northeast. All the angle iron was taken off (50K JPEG), all bubba welds ground down, new tires put on, and it's taking shape nicely. There were two Indian Tank brackets on the back of the trailer; those came off, but I left the two handleswhich make it easy to move around. I took off 55 pounds of angle iron in total." 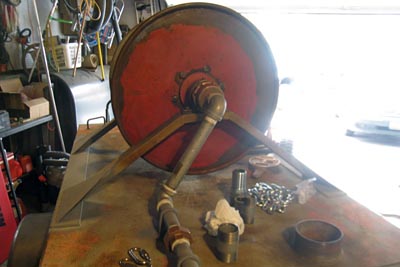 "So far the reel has been rebuilt, fenders added, the reel mount assembly has totally been rebuilt, and all piping repiped with new. A prior owner must have started a resto on the trailer, as the grey blotches are Bondo, and it has been sandblasted before.

"Once I figure out exactly whats the correct hitch, I'll grind off whats on there and weld on the original that I have, which I think is correct." 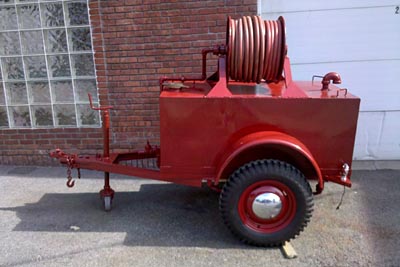 "The orignal tread style tires were over $200 each, so we went with the NDT's at less than 1/2 the cost, and they match the ones on the Jeep."

Thanks to Mark Ciaglia for the photos. Watch for further updates, and see also my earlier photos of this Howe CJ-3B Fire Engine. -- Derek Redmond