Spring Fever in a CJ-3B

No question about it, Jeeps are built to be hard-working vehicles, but at this time of year it's hard not to think about the fun part of driving a Jeep. Here are a few photos showing some of that fun. 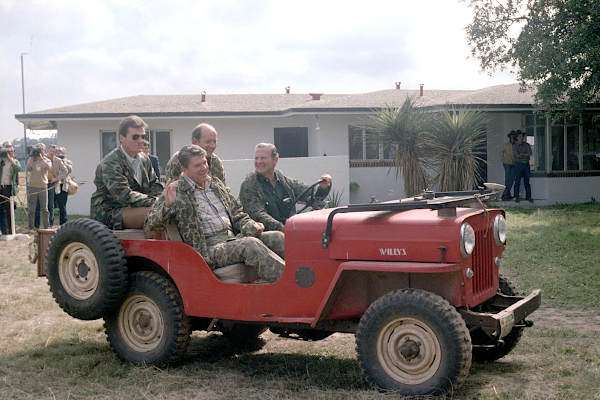 President Ronald Reagan heads out for a turkey shoot with Chief of Staff James Baker (driving) and Deputy Chief of Staff Michael Deaver, in this White House photo taken on 14 November 1981. The President was spending the weekend at the J.O. Winston Ranch in Sabinal, Texas.

According to The New York Times, the 8,500-acre ranch belonged to relatives of the wife of James Baker, and had feeding stations where turkeys are lured within shotgun range with corn. It said there were 14 van loads of reporters on hand for the photo op, where the three "did not carry the 12-gauge shotguns used in the hunting, apparently because the White House, sensitive about the 'gunslinger' image Mr. Reagan acquired as an actor in western movies, did not want him to appear in news film carrying a weapon."

The CJ-3B (appropriately painted in President Red) has a bed extension in the rear, and apparently a seat cushion up on the rear wheelhouse, from which perch the Secret Service can get a good view of the turkeys. The Washington Post reported that Reagan told the press, "I've never gone turkey hunting before, so I'm looking forward to this." 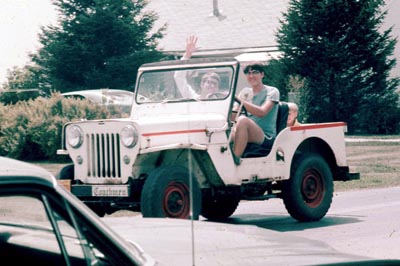 Jeff Petrowich says, "These are pictures of my Uncles Jim and Steve driving me around in their 3B in 1970. I'm the little guy in the back, two months shy of my 5th birthday. I have some memories of the Jeep but sadly, I do not remember that day.

"The stripe around the tub is red paint. Jim bought the Jeep for $500 from Coachmen Trailer (see the bumper sticker.)" 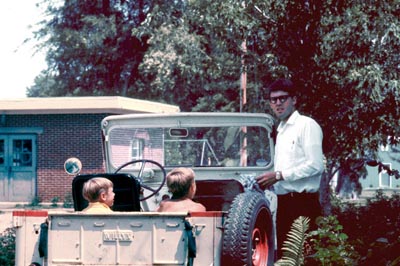 "The little guy on the right is my brother Tim. He was 7. The pictures were taken in August of '70 right before Jim left for Vietnam. He sold the Jeep several years ago after it was rusted out and locked up. He lives in the Ft. Worth area.

"Kinda makes me want to pick up a white '53 and restore it to the photo." 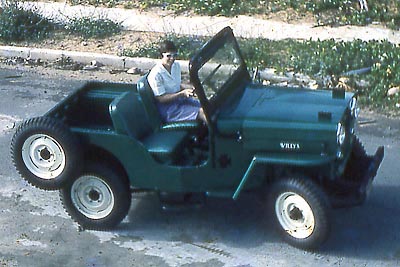 Clifton Clark sent this 1961 picture of his mother, the late Janet Wathen Clark, driving the family's brand new 3B in Puerto Rico. It's great to find these vintage color photos, which often reveal details of the original configuration of the Jeeps. This one gives a good look at the green seat covers, and the black plate covering the fresh air vent. There's also a 1965 rear view photo (100 K JPEG) with Clifton's dad, Burchell Clark and his dogs, in the '61 CJ-3B. 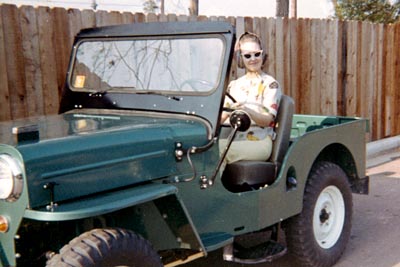 Anieca Grimes takes her dad's brand new 1965 CJ-3B for a spin in Houston, Texas. The summer of '65 was shaping up to be a lot of fun in Houston, including the Beatles hitting town for two concerts at the Sam Houston Coliseum in August.

Chet Couvillon says: "While going through some old photos, I discovered this one. My grandfather purchased the '65 CJ-3B brand new, and here is one of the first pictures of our Jeep -- the lady in the photo is my mom. The Jeep I rode in as a child and learned to drive on as a teenager will soon be listed in my name, as soon as we get a replacement title (we can't find the original.)"

Dan Morgan takes a crowd for a ride on an old logging road near Talihina, Oklahoma in 2010. Dan's '62 3B is mostly original, with the addition of a Ramsey 8000 lb. PTO winch. The Jeep has spent its whole life in Oklahoma, and Dan is the third owner. Take a better look at Dan's back seat (250K JPEG) which provides lots of space and a good view for passengers. 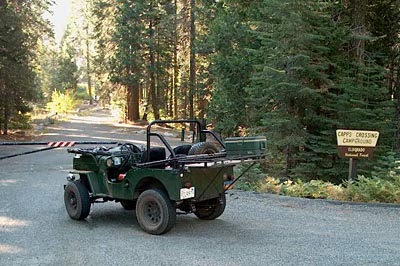 Gene Troxell's '54 is seen in the huge Eldorado National Forest in California in 2008. Offroading by motorized vehicles in Eldorado is now prohibited, but there are 1800 miles of marked roads and trails in the park.

Put some more weenies on the 3BQ! 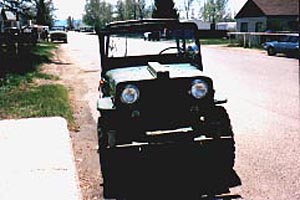 Back in 2000, Del Francis wrote: "I know you guys must envy the sleek, racy hood scoop on my Jeep, but you don't know the whole story. The guy I bought it from had made it himself to hold his hot dog forks, it even had a basket inside. I am sorry to say that I threw it away. I know a lot of 3B'ers would probably kill for a reproduction." 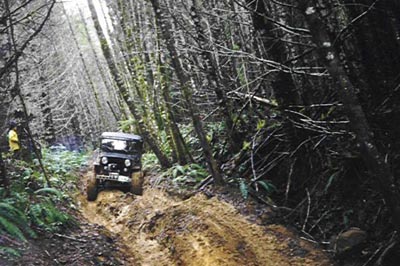 "Last year on the Stag Run in Oregon we had 250 rigs participate which was our largest turnout." 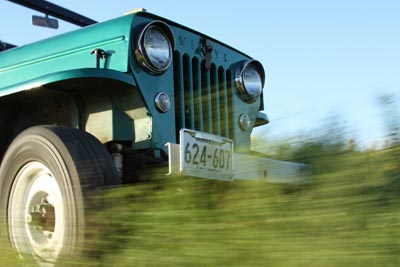 This shot was the winner in an August 2010 "high velocity" photo contest at Gizmodo.com, the Gadget Guide.

Chuck, the photographer, commented: "Canon 50D, F/14, 1/20sec, ISO100. This photo was a team effort. It was shot in a field a few miles from my home. Dad was driving the Jeep (1954 Willys) and my wife was driving our truck. I was laying in the bed of the truck holding the camera as near to the ground as I could reach. I set the camera up to shoot in high speed mode with servo focus and just snapped away since I couldn't see the screen or through the eyepiece. After a few different settings this one worked the best. It was difficult to match the speed of the vehicles and the bouncing as we went over off-road obstacles. All three of us had a blast."

Gizmodo's editor noted: "The chunky, utilitarian Jeep design mixes with the perfect sharpness of the photo in a wonderful way. When you notice that the wheel and grass are a blur, it almost seems impossible that the vehicle is in such excellent focus. Beautifully executed shot. Also, I want your dad's Jeep."

Thanks to everybody for the fun photos. Have a great summer. -- Derek Redmond